Was there something ironic about holding an event on St. Patrick’s Day to introduce the Knoxville-Oak Ridge community to the 10 start-ups that comprise the inaugural cohort of the “Techstars Industries of the Future Accelerator”?

I could not help but think about the symbolism of the day and the proverbial “Luck of the Irish” phrase as I reflected on an important goal that many of us in the region have: retain some percentage of the companies locally after the 13-week program ends in late May. After all, as we noted in this teknovation.biz post just a few weeks ago, one-fourth of the start-ups in the first “Techstars Equitech Accelerator” in Baltimore have announced that they are relocating to Baltimore. Why could that not happen here? 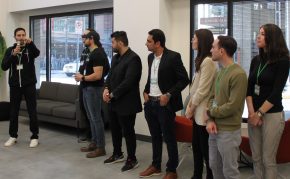 Tricia Martinez, Managing Director of Techstars Knoxville, moderated the brief program and emphasized that “We are building a deep tech hub here.” She also asked each of the participants – many pictured here – to briefly introduce their start-ups with the proverbial elevator pitch before calling on three others for their comments.

During remarks on Thursday, the top executives at two of the three sponsors of the accelerator expressed their hopes that some will remain here or open a local office after the program ends. Randy Boyd, President of the University of Tennessee (UT) System, is always in sales mode, and he was again when he spoke, emphasizing how he built a very successful company – Radio Systems Corporation – after one earlier start-up failed and a second one was modestly successful.

“We did it because we were here in Knoxville,” he explained, noting three key factors that make this a great place to start and grow a company: great partners like UT, Tennessee Valley Authority (TVA), and Oak Ridge National Laboratory (ORNL); a great place to live; and an abundance of people who want to help. Boyd also applauded the 10 entrepreneurs for their brief elevator pitches. “My dad told me to always be closing, and you did it very well.”

Thomas Zacharia, ORNL Director, emphasized the importance of the “Techstars Industries of the Future Accelerator” in general and their participation in the first cohort specifically. “Welcome to the Oak Ridge Corridor,” he said. “All of you are going to establish this as a region of innovation.”

TVA is the third sponsor of the program. 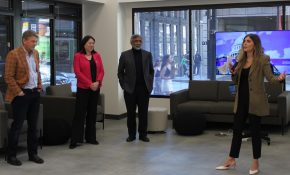 A special guest for the event was Vanessa Chan, Chief Commercialization Officer for the U.S. Department of Energy (DOE) and Director of its Office of Technology Transitions. She applauded the public-private partnership behind the Techstars program and briefly mentioned another DOE-underwritten accelerator that will launch here in June. It is the “Spark Cleantech Accelerator” at the University of Tennessee Research Park.

Chan also offered a few pieces of advice to the 10 teams. “Use Techstars to think about your value proposition,” she said, adding that networking with others is also critically important. Finally, Chan reminded the entrepreneurs that they have two eyes, two ears, but one mouth. “Use them in that ratio,” she advised. 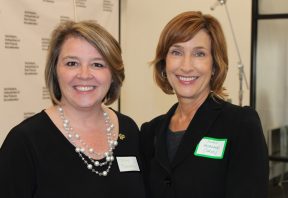 Another of the attendees at the event was Susan Hubbard, ORNL’s new Deputy Lab Director for Science and Technology. She’s pictured here with Stacey Patterson, UT’s Vice President for Research, Economic Development and Outreach.

Thursday evening’s event allowed attendees to see the new home base for the program. Until recently, the space in the old Miller’s Department Store building on Gay Street housed a downtown branch for Regions Bank. It has now been transformed into a very open, airy, flexible space to accommodate the needs of the teams including two that came from other countries.

Most of the evening was designed to allow interaction between attendees and the founders of the 10 start-ups as the latter explained their technology, how it works, and what they hope to accomplish. It was also an opportunity for the community to show its support for the new initiative and offer help in ways that might convince some of the start-ups to stay here after the program ends in late May.

As we interacted with many of the entrepreneurs, we were encouraged to hear them talk very positively about the welcoming nature of the Knoxville-Oak Ridge region and the assistance they have received thus far.

Augurisk: Helping mitigate crime and natural disaster risks anywhere in the U.S. by providing predictive analysis and advanced risk scoring. (In photo on the left, Sidi (Mo) Mezian demonstrates the system to Robyn Geron of the UT Research Foundation.)

Be Global Safety: AI-powered software to detect and prevent workplace safety incidents and near-misses in real-time. (In photo on the right, Nilay Parikh explains the system to Hash Hashemian of Analysis and Measurement Services Corporation.)