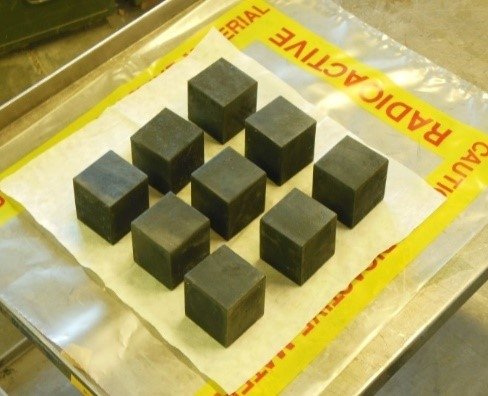 The depleted uranium blocks prior to grit blasting.

Earlier this year, the National Nuclear Security Administration’s (NNSA) Office of Nuclear Material Integration (ONMI), in cooperation with the Y-12 National Security Complex (Y-12), completed the Zero Power Physics Reactor (ZPPR) Depleted Uranium (DU) Recovery Project. The effort successfully recovered 28 metric tons of high-purity DU blocks previously used in the ZPPR; a research reactor located at the Idaho National Laboratory. It also resulted in the recycling of 62,000 pounds of nuclear materials and over 50 percent cost savings for the overall Department of Energy complex. Moreover, it demonstrated the benefit of effective collaboration between public and private sectors.

“The processes, lessons learned, and results of this project can be applied to similar opportunities throughout the Nuclear Security Enterprise,” said Richard Meehan, Director of ONMI. “The resources conserved through this effort will be used to support other mission-critical activities.”

The goal of the project was to recast DU blocks into shapes that can be used to support NNSA’s Defense Programs activities at Y-12. The challenge, however, was the special coating used on the DU blocks prevented corrosion and material loss: it also rendered the blocks unusable for alternate purposes – and the coating needed to be removed.

To solve this problem, ONMI coordinated with Y-12 to engage Manufacturing Sciences Corporation (MSC) to help process the material for reuse. After evaluating several methods to remove the coating, the team eventually settled on grit blasting – a process in which abrasive particles are accelerated and forcefully directed against a surface to remove contaminants and condition it for subsequent finishing.

Ultimately, all 28 metric tons of the material will be processed, recast, and transferred from MSC to either Y-12 or off-site research and development facilities for use in technology maturation efforts that support the Defense Programs mission. Prior to ONMI involvement, the DU was to be disposed of as low-level radioactive waste at the Nevada National Security Site, but thanks to recycling and reuse of the DU, it significantly reduced the volume of radioactive material waste.