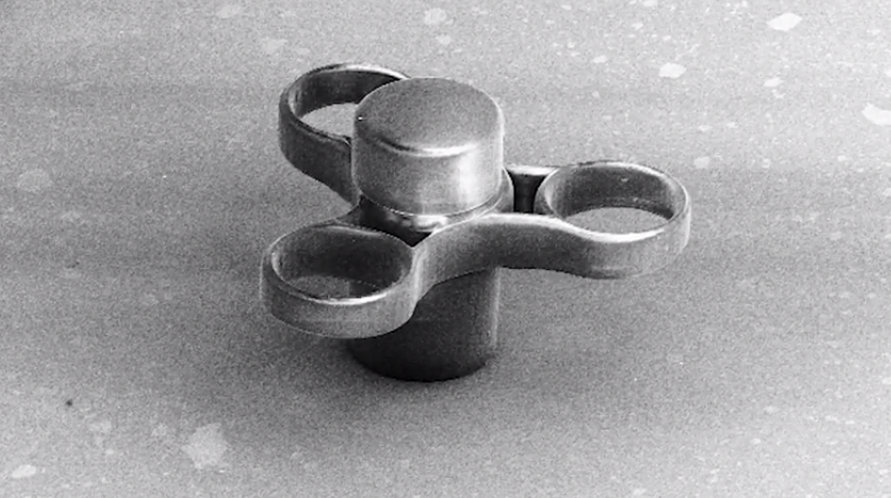 One drop of liquid, a cutting-edge laser 3D-printer and a few hours are all it takes to make a fidget spinner smaller than the width of a human hair.

The tiny whirligig was created by researchers at Oak Ridge National Laboratory’s Center for Nanophase Materials Sciences to illustrate the facility’s unique resources and expertise available to scientists across the world. The microscale fidget spinner measures only 100 microns wide, or one tenth of a millimeter, but the capabilities it represents are enormous.

“We felt like it would be an interesting demonstration for younger people who may not know that the federal government maintains these user facilities around the country, which anybody can use as long as they submit a successful proposal,” said ORNL’s Adam Rondinone.

The Nanoscribe machine that built the fidget spinner is also used by researchers to create microfluidic and micromechanical devices for scientific applications. The instrument uses a focused laser to convert a liquid into a solid at a microscopic level. This process, much like 3D printing, allows researchers to precisely design and build complex designs to make functional microscale devices with moving components. Watch a video of scientists creating and testing the fidget spinner here.

“Our job is to offer cutting-edge experiments, instrumentation and expertise, to help other scientists to achieve their goals,” Rondinone said.

All the tools at CNMS are available through the facility’s user program, which is open to users from academia, the private sector, and research institutes worldwide. Access is free of charge to users who publish the results in the open literature. Because of this, Rondinone explains, researchers at companies may be less aware of the resources available to them, or hesitant to use them.

“We work with industrial partners to help them identify fundamental science questions that we can answer and then publish in open literature, without jeopardizing their intellectual property,” he said.

“It’s a compelling way for us to reach out to the next generation of scientists,” Rondinone said.

UT-Battelle manages ORNL for DOE’s Office of Science. The single largest supporter of basic research in the physical sciences in the United States, the Office of Science is working to address some of the most pressing challenges of our time. For more information, please visit www.science.energy.gov/.