Workers Use Skill, Ingenuity to Install New Manipulators at ORNL

Workers Use Skill, Ingenuity to Install New Manipulators at ORNL 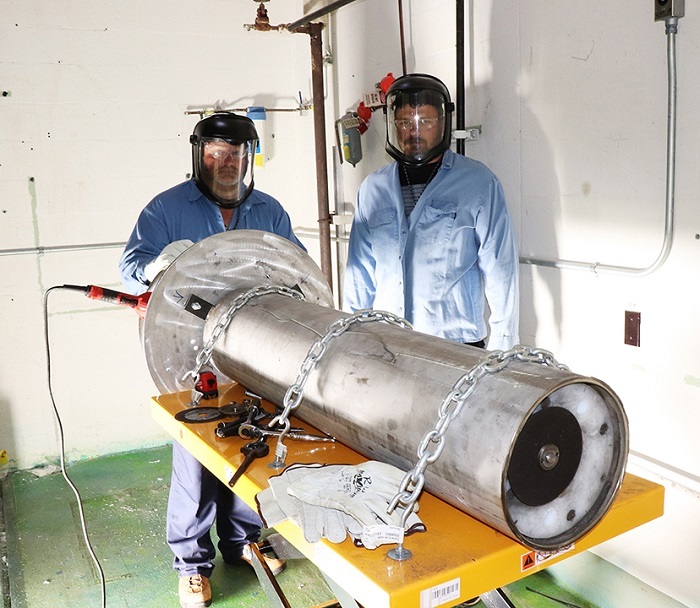 Upgrades and construction are progressing at Building 2026 to prepare the facility to begin processing a high-dose portion of Oak Ridge’s uranium-233 inventory. That work will enable EM to convert the material into a disposal-ready form after extracting an unprecedented amount of thorium for next generation cancer research.
Oak Ridge Office of Environmental Management (OREM) and contractor Isotek are performing the work to support EM’s highest priority project at DOE’s Oak Ridge National Laboratory — to eliminate the inventory of uranium-233.
The high-dose portion of the inventory must be processed in hot cells that provide protective shielding and remote mechanical arms, known as manipulators, to handle the material. First, however, those hot cells require upgrades, including new remote manipulators. View a video explaining the upgrades here.
Isotek employees Wes McCloud, Shane Miles, and Ryan Souza developed a tool to install the new hot cell manipulators.
Manipulators must be installed without anyone entering the hot cells due to contamination inside the cells. To accomplish this, the manipulators are slid through a tube on the hot cell outer wall and clamped against that wall.
The Isotek employees learned that the tube needed to be shortened because it extended beyond the wall on the inside of the hot cell. They planned to insert a circular cutting tool from the non-contaminated side of the tube to shorten it inside the hot cell.
Despite that challenge, the task became even more difficult.
“After about 30 minutes, the cutter would quit spinning,” Miles said. “If the cutter isn’t spinning, then it’s not cutting.”
Heat generated from the rapid spinning of the cutter and the friction against the tube caused part of the cutter to expand and jam itself against the interior of the tube.
The employees shaved down the expanding piece of the cutter to keep it from making contact with the tube interior and attached shock-absorbing ball bearings to it. These changes helped stabilize the cutter and reduce friction while cutting.
The hot cells are scheduled to be ready for processing high-dose canisters later this year.
Isotek was processing low-dose canisters of uranium-233 in gloveboxes before Oak Ridge entered essential mission-critical operations in April. That work is scheduled to resume as operations ramp up in future phases.