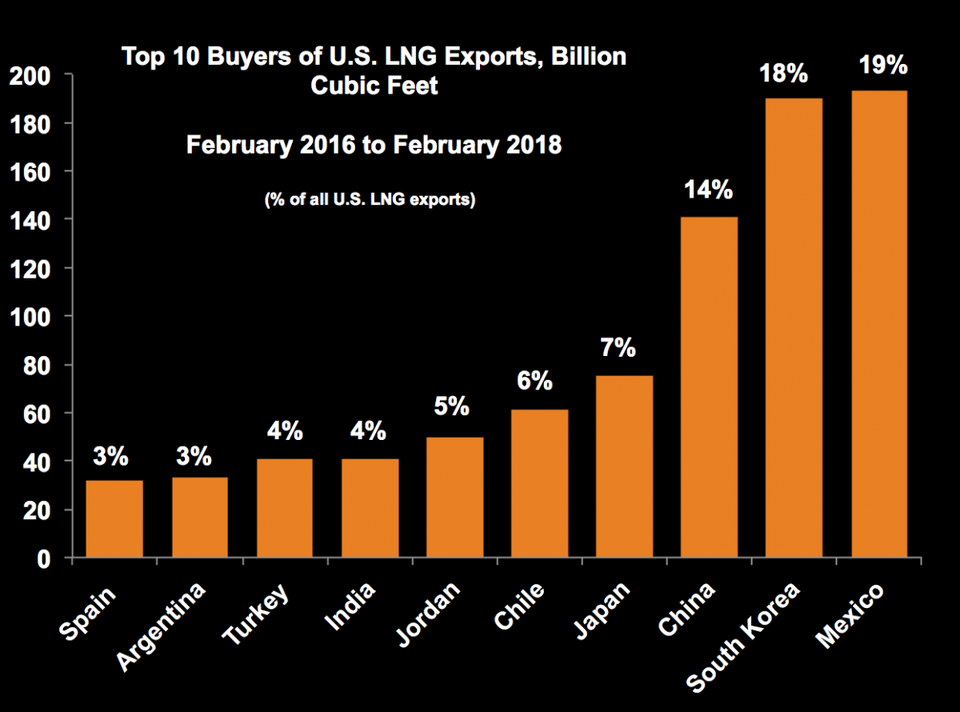 South Korea is set to surpass Mexico as the largest buyer of U.S. LNG.

The U.S. is becoming an increasingly larger player in the $100 billion global liquefied natural gas market, a business that is now about 45 Bcf/d and will boom to $300 billion by 2030.  So far this month, U.S. LNG feedgas has averaged 3.5 Bcf/d, compared to 2.1 Bcf/d for year-ago levels. LNG now accounts for about 4-5% of our total demand, and now with two exporting facilities there’s much more to come: U.S. capacity to export LNG will more than triple to over 10 Bcf/d by 2020, and we could be the leading global supplier within the next five years. After Cheniere Energy’s Sabine Pass in Louisiana started exports in February 2016, Dominion Energy’s Cove Point in Maryland just exported its first cargo March 1 and went into commercial service April 10.

U.S. LNG exports have continued to travel the world, reaching 28 countries per government data. About 60% of our exports have been sold on a spot basis, an added flexibility that the long rigid LNG market craves. Stated by the U.S. Department of Energy: “Although liquefaction capacity at Sabine Pass is fully contracted under long-term contracts to various buyers, flexibility in those contracts’ destination clauses allows U.S. LNG to be shipped to any market in the world.”

Mexico has been our largest customer, but South Korea is closing in since receiving its first cargo under a long-term contract between Korea Gas and Cheniere. Mexico’s position as top LNG destination is temporary, given that the ongoing pipeline buildout in the country will allow for more imports of U.S. piped gas and lower intake at Mexico’s three LNG import terminals. The pipeline urgency in Mexico is obviously high: prices for LNG imports from the U.S. are about 50% higher than for piped gas.