What was the Manhattan Project?

What was the Manhattan Project? 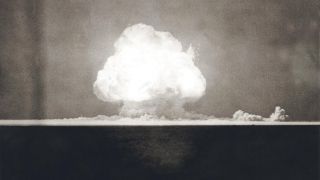 The Manhattan Project, which took place during World War II, was a U.S. government-run effort to research, build, and then use an atomic bomb. Mobilizing thousands of scientists worldwide and taking place across multiple continents, the project eventually resulted in the construction of the two atomic bombs dropped on Hiroshima and Nagasaki.

How the project got started

In 1939, President Franklin Delano Roosevelt received a letter from physicist Albert Einstein with an urgent message: Physicists had recently discovered that the element uranium could generate vast amounts of energy — enough, perhaps, for a bomb. Einstein suspected that Hitler might already be working to stockpile the element.

World War II had barely begun, and it would be three more years before the United States got involved, but Einstein’s letter mobilized action. The U.S. government began to marshall top physicists in a secret project. At first, their goal was only to find out whether an atomic bomb — a weapon harnessing the energy released by an atom split in two — was really possible, said Alex Wellerstein, a science historian at Stevens Institute of Technology in New Jersey. But by 1942, the goal was to build a bomb before Germany could. By the time the United States entered World War II, the project was recruiting tens of thousands of scientists and civilians. Not long after, it was given the code name “the Manhattan Project.”