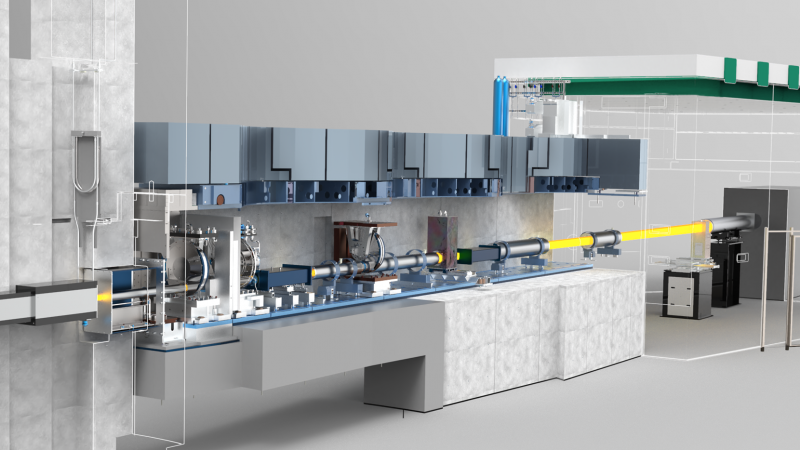 The VENUS beamline at ORNL’s Spallation Neutron Source will provide the United States with an exclusive state-of-the-art imaging capability to study materials, providing novel insights into materials used in energy storage, additive manufacturing, nuclear fuels, biological systems, and geosciences, in addition to nondestructive analysis of historical artifacts. An artistic rendition features the concrete slabs poured to support the optical devices, including the chopper systems. The choppers attach to the beamline feeding from the bulk shield insert mounted to the concrete barrier in between the instrument and the SNS liquid mercury target (not shown) used to create neutrons. (ORNL/Jill Hemman, Tommy Thomasson III)

Researchers and engineers at the Spallation Neutron Source (SNS) are making progress on the construction of VENUS, the facility’s newest instrument for studying materials in exciting new ways that are currently not possible for open research programs in the United States.

The Department of Energy’s (DOE’s) Oak Ridge National Laboratory (ORNL) is home to two world-leading neutron scattering research facilities, SNS and the High Flux Isotope Reactor (HFIR). VENUS is a state-of-the-art imaging instrument that will be used to study a wide range of diverse materials such as battery materials, advanced alloys, nuclear materials, plant physiology, biology, and even archeological artifacts. While neutron imaging isn’t completely new, VENUS will provide time-of-flight imaging capabilities, enabled by the SNS pulsed-source accelerator, used to simultaneously capture information about the structure and behavior of materials at the atomic scale.

Neutrons are an essential particle of all matter. Since the mid-1900s, scientists have been harnessing their properties to peer deeply into materials to understand the atoms inside. The information gained has guided and continues to guide technological advances. In most neutron scattering experiments, neutrons provide an averaged measurement of a material to determine the atomic structure, atomic motions, magnetic order, and many more properties averaged across a sample. An alternative technique is neutron imaging, where significant advances are being made and implemented on VENUS.

Whereas most neutron scattering techniques build atomic-level models of materials based on how neutrons “bounce” or scatter off atoms, the IMAGING instrument at HFIR generates pictures as neutrons pass through objects. The images are called radiographs, similar to clinical x-rays, in which contrast, or how neutrons are absorbed or deflected by different materials, reveals the internal structure of objects.

In contrast to x-ray imaging, neutrons can penetrate deep into materials made of heavy elements-such as engine blocks and turbine blades-and are sensitive to the nuclei rather than the surrounding electron clouds. That enables neutrons to detect the differences in nuclear isotopes and distinguish between chemically similar elements.

“Neutrons can also see light elements in the presence of heavier ones. For example, using our existing IMAGING beamline at HFIR, hydrogen atoms can be isolated or illuminated against the background to reveal how water travels through plant roots,” said lead imaging instrument scientist Hassina Bilheux. “The same technique can be used for industrial applications such as imaging soot deposition in an automobile’s catalytic converter.”

Going beyond what is possible with HFIR’s IMAGING beamline-that uses a steady-state or constant beam of neutrons-the construction of VENUS at the SNS pulsed-source accelerator will enable time-of-flight imaging capabilities. Time-of-flight techniques use the fact that a neutron’s velocity depends on its energy, and by measuring the time at which neutrons from the source’s sharp neutron pulses arrive at the imaging detector, researchers can differentiate what neutrons of different energies see. Therefore, every neutron image will also contain “spectroscopic” information.

The spectroscopic technique provides researchers with imaging capabilities complementary to those at HFIR, making it possible to measure crystalline properties of a material or identify certain elements within a material. In that vein, VENUS will provide significant insights into optimizing nuclear fuels by isolating and differentiating various heavy elements in a fuel composed of elements such as uranium or gadolinium, for example.

Physical construction of the beamline began in 2019, and work is on track to begin commissioning VENUS in 2023.

Significant installation work was accomplished while SNS was down for an extended scheduled maintenance cycle from mid-February to early April. These recently completed activities have focused on pouring concrete and installing heavy steel components, such as

• Chopper shelves: Two layers of concrete were poured, raising the floor to provide a shelf for the choppers-the large metal disks that rotate 3,600 times a minute with defined openings to select neutrons of specific velocities and thus to create the pulses of neutrons with the desired range of energies.

• Bulk shield insert: The bulk shield insert is a stainless steel box-bolted to the thick concrete wall separating the instrument hall from the liquid mercury target-that provides a mounting bracket for the installation of other equipment such as the chopper, the beam shutter, and the neutron flight tube-the line neutrons travel from the source to the instrument.

• Chopper cavity shielding: An 8,000-pound steel frame installed around the bulk shield insert provides support to the chopper and other equipment, as well as support for “roll-in shielding blocks” that will be later installed.

“We had a very successful first installation period for VENUS, and we completed all the scheduled activities during the spring outage,” said lead instrument engineer Tommy Thomasson. “Over the next few months, design work will continue on the shielding and neutron optical components.”

Work is also moving forward on the procurement of additional shielding, three choppers, and variable-aperture optical equipment. Installation activities for the next outage from mid-July to mid-August include modifications to the shielding on neighboring beamline POWGEN, as well as installation of the first VENUS embedded plates. The embed plates are 2-inch-thick steel plates installed above and below the length of the flight tube. The lower plates will provide a stable platform for fastening optical devices, and the upper plates will provide a solid surface for the five 18-ton roll-in shielding blocks used for radiation containment.

“It’s important that we maximize the number of instruments available at the SNS for our researchers so that we can accelerate scientific discoveries,” said Neutron Scattering Division director Hans Christen. “What’s particularly exciting is that VENUS brings a completely different way of using neutrons to the SNS, which both our academic- and industry-based user communities have requested.”