US Pressures North Korea to Ship Nuclear Weapons Overseas Before Sanctions Lifted, According to Reports

US Pressures North Korea to Ship Nuclear Weapons Overseas Before Sanctions Lifted, According to Reports 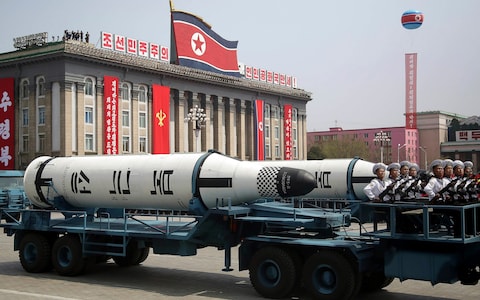 A submarine missile is paraded across Kim Il Sung Square during a military parade in Pyongyang, North Korea, in 2017 CREDIT: AP

The United States has told North Korea that is must start shipping nuclear weapons, fissile material and some of its long-range missiles out of the country within a couple of months of the June summit between Kim Jong-un, the North Korean leader, and President Donald Trump, according to South Korean media.

The report by Yonhap News echoes comments by John Bolton, the president’s national security adviser, who on Sunday reiterated that Pyongyang could expect no assistance or relaxation of sanctions until it fully dismantles its nuclear and ballistic missile programmes.

Speaking on ABC News, Mr Bolton said, “I think the implementation of this decision means getting rid of all the nuclear weapons, dismantling them, taking them to Oak Ridge, Tennessee”.

Yonhap said Washington’s demand was delivered to North Korea as part of the preparatory talks ahead of the summit meeting in Singapore between Mr Kim and Mr Trump, with the US stating that sanctions will remain in place until the North complies.

Pyongyang’s reaction was not known, although there have been other reports that the regime is resisting requests that it destroy all its nuclear weapons data and send an estimated 10,000 nuclear scientists abroad.

Failing to destroy the accumulated knowledge would permit the North to carry out further research in secret and resume a nuclear weapons programme at short notice, analysts point out, while it would also enable the North to sell atomic data to other nations or terrorist groups.