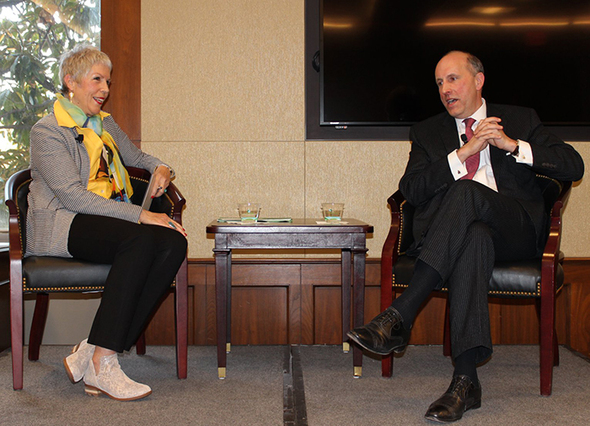 Under Secretary Paul Dabbar speaks with Jenny Freeman, past president of the ETEBA, at last week’s event for the House Nuclear Cleanup Caucus.

DOE officials, members of Congress, and key stakeholders gathered April 11 on Capitol Hill at an event for the House Nuclear Cleanup Caucus, where Under Secretary for Science Paul Dabbar discussed synergies between national laboratories and the environmental cleanup program that are boosting momentum and sharpening the Department’s focus on remediation.

The laboratories and EM share traits in managing projects that are large, complex, and first of a kind, requiring the development of technology to accomplish them on time and on budget, Dabbar said.

Many technologies EM employs in groundwater remediation and waste vitrification originated at the labs, he said.

And EM accomplishments to decontaminate and demolish aging facilities at places such as Oak Ridge and the Lawrence Berkeley National Laboratory will clear space and allow those sites to undertake new missions with new buildings.

“There are a lot of similarities around projects, project management, contractors, and contractor management that are very similar between the two, and there are things that can be learned from that.” Dabbar said. “That is the core synergy.”

Dabbar’s remarks came in a formal conversation with Jenny Freeman, past president of the Energy Technology and Environmental Business Association. Their discussion touched on cooperation between DOE’s EM and the Office of Science. The offices were placed under Dabbar’s purview as part of a Department reorganization last fall. The Under Secretary also discussed his priorities for the coming year.

The event, which drew an audience of roughly 150 people, was the first of the year for the caucus, a bipartisan group whose members represent or have interest in communities where the Department is carrying out cleanup.

Rep. Chuck Fleischmann of Tennessee, who chairs the caucus with Rep. Ben Ray Luján of New Mexico, said the organization is a good example of how Democrats and Republicans work together in Congress.

Fleischmann said he was encouraged by the support  EM has received from the Administration. Its proposed $6.6 billion budget request for fiscal 2019 is the largest in a decade.

“I was very pleased to see the Trump Administration with its strong commitment for EM. It was very great and it’s going to be much better,” Fleischmann said. “There is a lot of work to do. We have actually decades of work to do in this country. So I am pleased in our progress. I am very pleased we are working together in these affected communities. The future is bright for EM.”

Dabbar, who was confirmed in November as Under Secretary for Science, said in light of a number of contracts coming up for consideration in EM, his top priority for the year ahead is to examine the contracting process and explore possible improvements.

“I’m also going to be looking at how we evaluate progress,” with an eye toward how successes and any needed improvements are measured and addressed, Dabbar said.

In meetings with contractor CEOs, Energy Secretary Rick Perry has focused on efficiency and progress in major projects, pressing the contractors to move forward but also encouraging them to identify obstacles that might stand in the way, Dabbar said.

“He has been personally very involved with some of the major ones that have had some challenges and holding everyone’s feet to the fire,” Dabbar said. “There is not a single person who has said that is a bad thing.”

“We are particularly excited about a number of things.” Dabbar said. “We are seeing success or are on the verge of success” in places like the East Tennessee Technology Park in Oak Ridge, at the Direct-Feed Low-Activity Waste initiative at Hanford, and at the C Tank Farm at Hanford, which is nearing closure.”