U.S. Company Has Deal with Jordan for Nuclear Technology

U.S. Company Has Deal with Jordan for Nuclear Technology 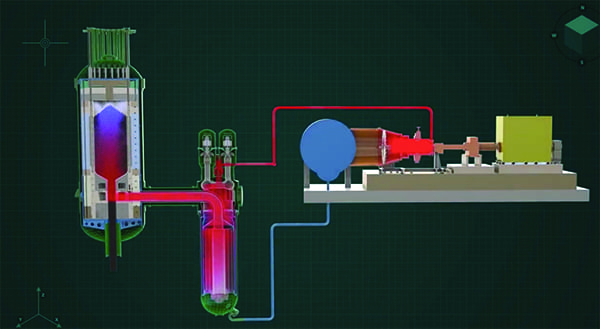 1. X-energy’s technology—a high-temperature gas-cooled reactor (HTGR)—works by passing helium over the fuel pebbles to extract heat. The heat then goes into a generator to produce steam for electricity. The X-energy reactor has a low power density (about 30 times lower than traditional reactors), which means heat generated during a loss of coolant event can be removed passively through conduction, thermal radiation, and natural convection. These natural mechanisms are always present, so the X-energy reactor does not have to rely on electricity to drive pumps or safety systems to prevent a core melt. Courtesy: X-energy

There have long been grand plans for developing nuclear power in the Middle East. After Iran brought the Bushehr plant online in 2011, the country talked of building another dozen or so reactors. Saudi Arabia in 2011 announced plans to build as many as 16 reactors over the next two decades; it now says it will issue a tender this year to build its first two units. Egypt, Turkey, and Jordan have discussed nuclear power for years, along with Israel, which to date has one reactor, a small unit at the Shimon Peres Negev Nuclear Research Center outside Dimona.

The region’s plans for nuclear power have moved in fits and starts, but change is underway. Egypt is building a $29 billion plant with the help of Russia’s state-owned Rosatom (see “Russia Offers to Expand Nuclear Power in Africa” in the December 2019 issue of POWER). Construction on Unit 1 of a four-unit, 5,600-MW nuclear plant at Barakah in the United Arab Emirates is complete, with the other three units also well along. Unit 1 is expected online this year.

Concrete was poured in November 2019 for a second unit at Bushehr in Iran, expected to produce 1,000 MW, and a third unit at the site is planned. The Akkuyu Nuclear Power Plant in Turkey, a planned 4,456-MW facility where construction began in April 2018, is moving forward and could come online as early as 2023. The country has announced plans to build three more nuclear plants, each with four reactors, by 2030.

Sinamees Hajarat of Jordan’s Atomic Energy Commission (JAEC), in a July 2019 presentation at the International Atomic Energy Agency’s 17th INPRO Dialogue Forum on Opportunities and Challenges in Small Modular Reactors in Ulsan, South Korea, said Jordan wants nuclear power due to its “growing demand for energy” and its “need for reliable and affordable baseload power,” in part to support industries including desalination. Jordan’s path to nuclear power recently became clearer when X-energy, a company based in Rockville, Maryland, signed a letter of intent (LOI) with JAEC as part of that country’s plan to develop a civilian nuclear power program.