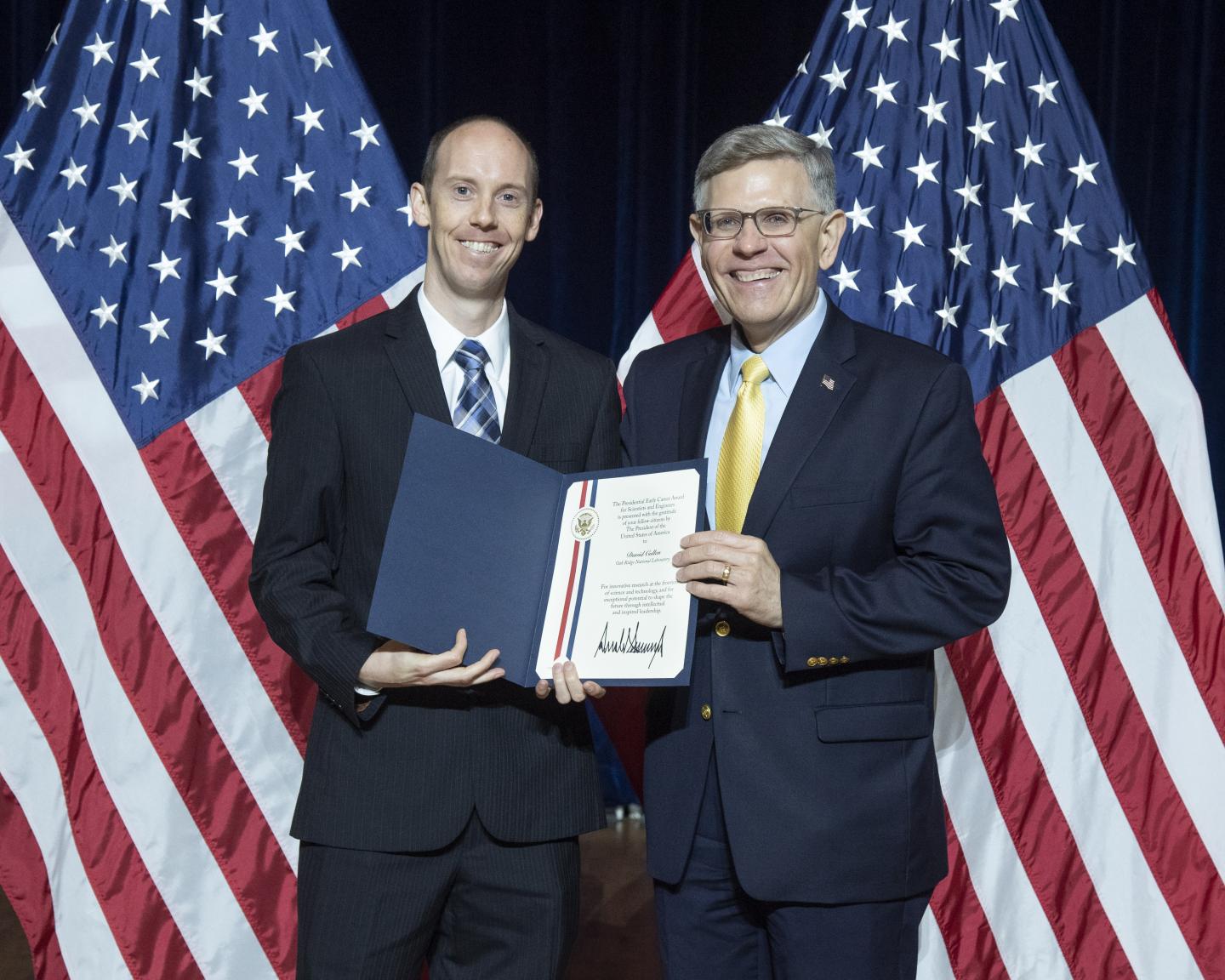 Two researchers from the Department of Energy’s Oak Ridge National Laboratory have received a 2019 Presidential Early Career Award for Scientists and Engineers, or PECASE.

David Cullen, of ORNL’s Center for Nanophase Materials Sciences, and Kate Page, of ORNL’s Neutron Scattering Division, are among the more than 300 researchers and engineers from around the nation to be recognized with a 2019 PECASE.

Established in 1996, the PECASE is “the highest honor bestowed by the U.S. government on outstanding scientists and engineers beginning their independent careers and who show exceptional promise for leadership in science and technology.”

“Many of this year’s award recipients hail from DOE’s 17 National Laboratories, which have proven again to truly be the crown jewels of science and innovation in the United States,” said U.S. Secretary of Energy Rick Perry. “I am honored to congratulate all of this year’s winners as they continue to embark in careers that will maintain America’s position as a leader in scientific development and advance the breakthrough technologies of tomorrow.”

The recipients were honored at a ceremony in Washington, D.C. on Thursday, July 25.

David Cullen received the PECASE in recognition of his “exceptional early career research accomplishments that have furthered our understanding of the structural and chemical factors than control the durability and performance of fuel cell materials, which are highlighted through critical collaborations with academia, industry and government laboratories.”

Cullen earned his Ph.D. in Materials Science and Engineering from Arizona State University and joined ORNL as an Alvin M. Weinberg Fellow in 2010. He is a prolific, impactful author with an extensive list of national and international collaborations established through projects funded by the Office of Energy Efficiency & Renewable Energy’s Fuel Cell Technologies Office and the Center for Nanophase Materials Sciences, a DOE Office of Science user facility. He also holds a joint faculty appointment with the Bredesen Center for Interdisciplinary Research and Graduate Education at the University of Tennessee, Knoxville.

Kate Page, a neutron scattering instrument scientist at ORNL, was recognized with a PECASE for her work in “determining the effects of nanoparticle size and shape on local short-range atomic structure using neutron total scattering data, which has opened new frontiers in the understanding of the unique properties of these materials.”

Prior to joining ORNL in 2014, Page earned her Ph.D. in Materials from the University of California, Santa Barbara and worked as a Director’s Postdoctoral Fellow and Total Scattering Team Leader at the Lujan Neutron Scattering Center at Los Alamos National Laboratory. She works extensively with the scientific community at the intersection of functional energy materials research and the advancement of structural characterization. Page also received a DOE Office of Science Early Career Research Program Award in 2015, is currently a principal investigator in two DOE Energy Frontier Research Centers and was honored with an Exceptional Service Award from the Neutron Scattering Society of America in 2018. In August 2019, Page will begin an ORNL joint faculty appointment with the Materials Science and Engineering Department at the University of Tennessee, Knoxville.

ORNL is managed by UT-Battelle for the DOE’s Office of Science, the single largest supporter of basic research in the physical sciences in the United States. DOE’s Office of Science is working to address some of the most pressing challenges of our time. For more information, please visit https://energy.gov/science.