The Most Secret U.S. national park – and How to Visit

The Most Secret U.S. national park – and How to Visit

Clandestine Manhattan Project sites are now open to the public

World War II-era babies born in Los Alamos, New Mexico had “P.O. Box 1663, Santa Fe” listed as their place of birth on their certificates. The secluded mesa-top city was a Manhattan Project installation.

The project was racing to build the world’s first atomic bomb and refine the materials necessary to fuel it. It was so top secret that these babies’ birthplaces were obscured and assigned to the post office box that received the city’s mail.

In 2015, the U.S. government established the Manhattan Project National Historical Park to protect sites in Los Alamos, as well as the other two project locales in Hanford, Washington and Oak Ridge, Tennessee. While technically publicly owned as part of the national parks system, all the protected buildings lie within working Department of Energy facilities, where nuclear research, among many other things, is ongoing.

In some cases, reaching them requires jumping through security hoops, and in others, they’re off-limits to the public. Secrecy surrounds the sites even today. This historical park may also be the most difficult to visit since completing a tour requires hopscotching the country.

The B-Reactor, now a national historic landmark, was the first of it’s kind in the world — Photo courtesy of Tri City Development Council

The Department of Defense divvied up tasks between Manhattan Project sites, with Hanford Engineer Works refining enough plutonium to power a nuclear weapon.

The site, on a stretch of the Columbia River three hours east of Seattle, shared similarities with the other sites: it was remote and sparsely populated. At each site, the government claimed eminent domain and depopulated the towns to make room for its facilities. Few buildings remain from prior to the Manhattan Project’s arrival at each location.

Hanford tours travel to the B-Reactor National Historic Landmark, where visitors stand face-to-face with the reactor that was the first of its kind in the world. Scientists used the reactor to produce plutonium used in Trinity Test, the world’s first atomic bomb explosion, and in the “Fat Man,” the bomb dropped by the U.S. on Nagasaki, Japan, on August 9, 1945.

Tours also venture to a handful of pre-Manhattan Projects buildings, such as the White Bluffs Bank, Hanford Irrigation District Pump House and Hanford High School, which was once used to house the 51,000 employees it took to build the reactor.

Hanford is the easiest to visit among the national historical park sites. It doesn’t require any specific identification or preparation. 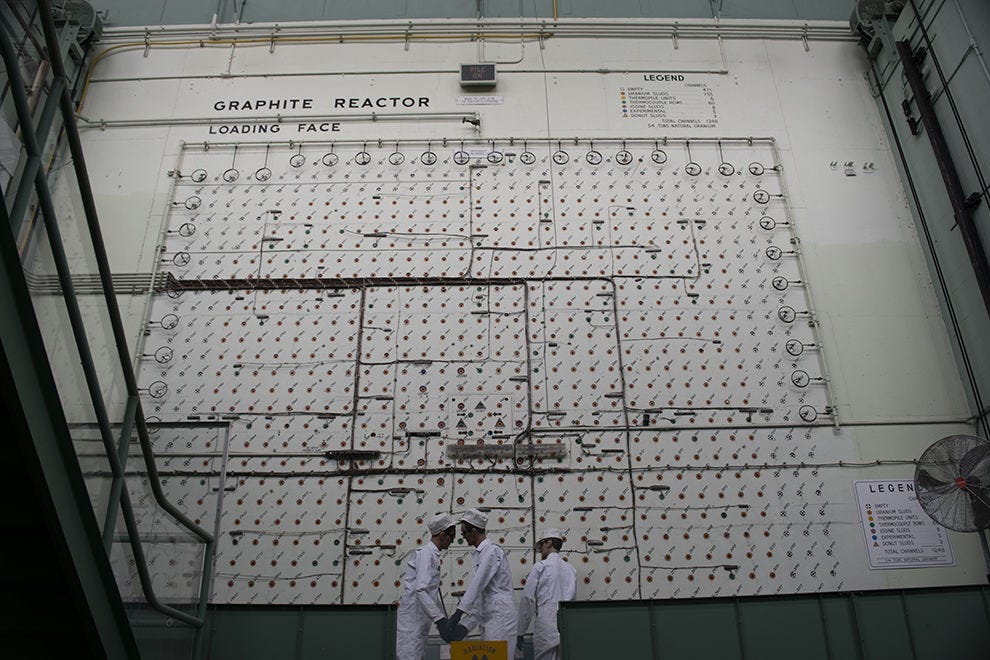 The Manhattan Project sites lie within the boundaries of Oak Ridge National Laboratory, which puts visitors through security paces. Public bus tours venture beyond the gates weekdays from March to November, and reservations must be made in advance.

When passing through the gates, visitors must present a valid federal ID. International tourists have to stay home; only U.S. citizens are allowed to visit. Everyone, however, can learn about the site’s history in detail at the American Museum of Science and Energy, in the town of Oak Ridge, 30 minutes west of Knoxville.

For those allowed beyond the gates, tours begin with a quick history lesson at the Y-12 History Center. The Y-12 complex was once one of three uranium enrichment sites. Bus tours then cruise the Oak Ridge campus where nuclear and energy research and development still takes place today.

During the Manhattan Project, some 75,000 people built and operated the industrial complex, including the Calutron Girls, young women who monitored dials and watched meters for a mass spectrometer that separated uranium isotopes. The women had no idea what they were monitoring; many only learned what they’d been doing after the war.

Tour buses also take visitors past the K-25 building, another uranium enrichment site. The U-shaped K-25 building once measured half a mile long by 1,000 feet wide; it was larger than the Pentagon. It has been remediated, though visitors can view the site.

Visitors step inside the X-10 Graphite Reactor National Historic Landmark, a pilot nuclear reactor which produced small quantities of plutonium. It feels like stepping into a gigantic telephone switchboard, with a two-story wall with open tubes to accept raw materials.

New Bethel Church stands as one of the only buildings remaining in the area from prior to the all-consuming Manhattan Project. Stepping across the creaky church floors and walking through the hillside cemetery is a poignant reminder of life before the bomb.