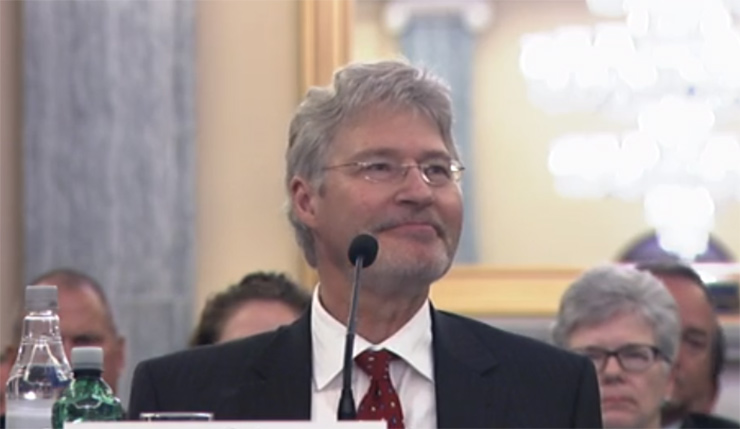 At a recent stakeholder forum, National Institute of Standards and Technology Director Walter Copan said he plans for NIST to lead a review of the laws underpinning federal technology transfer policy. He also said expanding the agency’s work in quantum science and engineering is among his priorities.

Three months into his tenure as director of the National Institute of Standards and Technology, Walter Copan’s agenda for the agency is taking shape. Speaking to a roundtable of industry and scientific society representatives last month, Copan outlined plans for new initiatives and identified priority technology areas.

Copan told the forum participants that NIST is planning to lead a review of federal technology transfer policies, including the Bayh-Dole Act and Stevenson-Wydler Act, two major laws designed to encourage commercialization of technologies developed with federal support.

“It’s now time for a fresh look at how we do federal technology transfer,” Copan said, noting that it has been almost four decades since the original acts were signed into law. Calling the initiative “Return on Investment,” Copan explained that one of its goals is to “streamline, simplify, and open up more of the doors of our federal laboratories and federally funded research at universities to have greater impact on the U.S. economy.”

Enacted in 1980, the Bayh-Dole Act represented a major shift in federal technology transfer policy, allowing nonprofit organizations and small business to retain patent rights to inventions resulting from federally funded R&D projects, subject to certain conditions. Prior to Bayh-Dole, the government retained patent rights to such inventions which many regarded as an impediment to technology commercialization.

The Stevenson-Wydler Act, enacted a month before the Bayh-Dole Act, explicitly establishes technology transfer as a high-level goal of the federal government and creates an apparatus to facilitate such transfer. For example, it requires all federal laboratories to establish technology commercialization offices and articulates their responsibilities.

Copan did not identify specific components of the laws that he believes should be changed, but did point to conflicting federal and state policies as one problem area. “How do we get the government out of its own way? It was really silly some of the things that have wound up in federal statute that clash with state governments, for example,” he said.

Copan said NIST will use its “convening power” to conduct the review in collaboration with public and private sector stakeholders. He added that organizations such as the Association of University Technology Managers and the Licensing Executive Society are “very excited about this opportunity.”

Copan’s interest in technology transfer policy stems in large part from his own experience in the area. Among other technology transfer-related roles, he previously served as a licensing executive at the National Renewable Energy Laboratory and as director of technology commercialization partnerships at Brookhaven National Laboratory. In an interview with FYI prior to his confirmation hearing, Copan said he is excited to “look to expand the technology transfer reach of the NIST organization and indeed of the federal complex itself.”

Copan appears eager to apply his experiences at the interface of the public and private sectors in other ways as well. At the stakeholder forum, Copan said he wants to make it easier for organizations to partner with NIST, an initiative he is calling “One NIST.” He identified protracted contract negotiations as one area that needs improvement.

Offering a hypothetical example, Copan said, “The Department of Defense isn’t going to sue NIST over some clause in a contract, but we take months sometimes to put arrangements in place that are in the national interest.”

“As a guy from business but with a real heart for the federal sector,” he continued, “I think there are great opportunities for … greater simplicity of engagement between public and private sectors, beginning with NIST.”

‘Is it time for the US to have a quantum spaceshot?’

Copan also identified quantum science and engineering as one of his “technology priorities,” alongside areas such as cybersecurity, artificial intelligence, the Internet of Things, structural biology, and advanced manufacturing.

He said that although major advances in the field have been made at NIST, recent “engineering deployments” by China have caught the attention of Capitol Hill and the research community, such as their recent demonstration of quantum entanglement with a satellite.

“We have, I think, an opportunity to look upon crises such as that and say ‘is it time for the U.S. to have a quantum spaceshot?’” Copan said, invoking the “moonshot” terminology used to describe President Kennedy’s call for sending humans to the moon. Copan then expressed support for a “National Quantum Initiative” to spur development of quantum-enabled technologies.

“We can’t fool ourselves — it’s a long journey to actually get to quantum-based devices and systems,” Copan later added, “but it’s very clear that we are in a race as a nation, and we have China and the European Union dramatically investing in this area.”

“We’re pleased that we have perhaps a slight edge in some of the science, but it’s anybody’s guess — we’re just one press release away from learning what else is going on in other parts of the world with the billions that are being invested.”

Copan indicated his desire to expand NIST’s quantum R&D programs with new resources rather than redirecting existing ones. “We’re not going to move people from another part of NIST and into the joint institutes and make them experts in quantum. We need to grow them. We need to hire them,” he said.

More broadly, Copan said he is making the case for NIST to take on expanded responsibilities across several areas. “As I’ve been having meetings on the Hill, I’ve been talking about growth areas for NIST, not shrinkage, because our economy is more complex than ever,” he said.

Referencing the challenging budget environment, he asked the forum participants to aid him in advocating for NIST. “Please, now is the time to be more vocal than ever.”