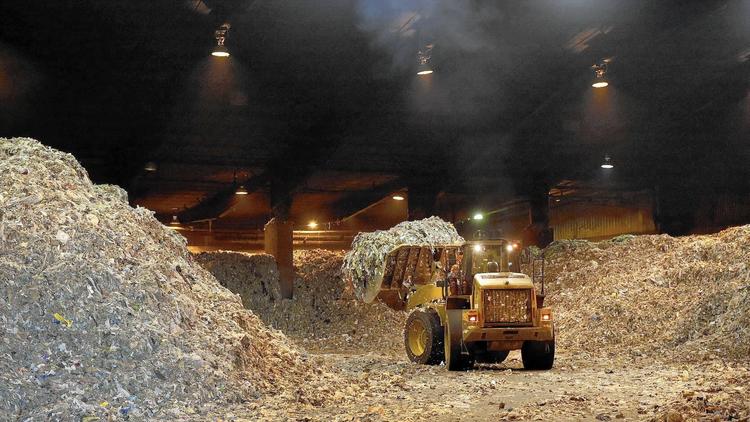 A payloader moves shredded trash April 19 from one area of the shredding plant to another for further shredding and material seperation as it is turned into fuel for a large steam boiler that will help create electricity. (Credit: John Woike)

One-third of all the waste generated in Connecticut ends up at the aging trash-to-energy plant in the South Meadows. The future of that facility, and what will happen to all that garbage, is now in doubt.

The state is currently reviewing private industry proposals for creating a more modern system focusing on recycling, composting and bio-energy rather than incineration. The big problem with those plans is that Hartford may not agree.

For the past 27 years, Hartford residents have been putting up with the pollution from burning all that trash, the traffic from as many as 300 trucks per day, and all the infrastructure, fire and police costs associated with the garbage plant.

Another sore point is that recent payments-in-lieu-of-taxes (PILOT) to Hartford from the quasi-state agency that owns the plant have plunged from $5 million annually to just $1.5 million.

“I’m not convinced that having a trash plant there is the highest, best use of that river-front property,” Hartford Mayor Luke Bronin said. “I want to have a broader discussion … about the potential economic development opportunities the South Meadows presents.”

Bronin said Hartford officials aren’t ruling out the possibility of accepting a new, cleaner refuse facility at the 80-acre South Meadows site, but he made it clear they will need a lot of convincing.

If Hartford were to reject a new, updated refuse facility, it would leave state officials and the more than 50 communities that now send their garbage to the South Meadows with a massive problem of finding another trash plan location.

“It’s always challenging to find a site for a large-scale facility in Connecticut. The most important factor is finding a host community, which always takes time,” admitted Lee Sawyer, the state’s project manager in charge of the effort to update the region’s solid waste disposal system.

“There’s always NIMBY,” said Marian Chertow, director of Yale University’s Program on Solid Waste Policy, referring to the not-in-my-backyard response that can accompany discussions about where to locate a garbage plant. “Yet there’s always trash.”

“People make lots of waste but they don’t want to put it anywhere close by,” said Chertow.

Sawyer, who works for the state Department of Energy and Environmental Protection (DEEP), said failure to find some replacement or updated version of the South Meadows plant would send refuse disposal costs in the region soaring.

It’s clear that state officials are hoping Hartford can be persuaded to remain as host for any new facility. “We consider [the City of Hartford] to be the most important stakeholder in the whole process,” Sawyer said. “It really needs to work well for Hartford in order to be successful.”

Technically, Hartford might not have the authority to block the state from continuing to use a revamped refuse plant in the South Meadows. Sawyer said state agencies don’t have to submit their projects to local zoning controls.

But Sawyer added the CRRA has traditionally asked local zoning approval for any of its refuse-related projects.

“Our intent is not to challenge Hartford’s authority to have oversight over the project,” he said.

Hartford officials want to negotiate as good a deal for the city as they possibly can, and may be using the possibility of refusing to play host to the plant any longer as a bargaining ploy.

The South Meadows trash-burning plant, and its recycling facility on Murphy Road, was originally owned and operated by the Connecticut Resources Recovery Authority. The CRRA had a long and rocky history, complete with financial scandals and allegations of mismanagement. The legislature finally took away much of its power and renamed the quasi-state agency the Materials Innovation and Recycling Authority (MIRA).

In 2014, the legislature passed a law setting a goal of recycling or reusing 60 percent of the state’s trash by 2024. At the moment, Sawyer said, only a little over 20 percent of the 720,000 tons of refuse brought annually to the Hartford plant and a satellite facility is being recycled.

The facility processes about 2,600 tons of garbage a day. Payloaders shift mountains of trash to conveyor belts to be shredded, then incinerated in huge burners. The heat is used to make steam that turns turbines to generate electricity. Peter Egan, MIRA’s director of operations and environmental affairs, said the facility uses 80 million gallons of Connecticut River water every day to cool the steam pipes.

Egan said Hartford residents don’t often have to smell all that garbage. “The odors we generate in the summer, they hit East Hartford, and don’t really impact Hartford,” Egan said during a recent tour of the plant. He said the MIRA facility has to meet strict pollution standards, and that emissions from the plant are “well below” the permitted levels. Any new facility would have to meet even tougher anti-pollution requirements, according to Egan.

DEEP officials have come up with a “Comprehensive Materials Management Strategy” that calls for dramatic increases in state and local recycling efforts, encouraging practices such as composting and finding ways to reuse trash. The plan is intended to take advantage of newer technologies like “anaerobic digestion,” a system that uses biological processes to turn food and other organic waste into combustible gas for energy.

Last fall, the agency asked for private industry proposals to revamp or replace the old South Meadows refuse plant with new, cleaner, greener trash technology. Sawyer said DEEP officials are now evaluating the eight responses from companies here in Connecticut, across the U.S. and around the globe.

The plan is to winnow down those proposals to just three top contenders, and release the names of the companies and details of their proposals by July or August. The deadline for the state to select one plan is July 31, 2017, and to have a new refuse recycling and disposal system up and running by 2022.

One critical issue in the selection process is that private industry finance the project without a lot of state financing. “We don’t have millions of dollars in bond funds for this,” said Sawyer.

DEEP officials — not those at MIRA — will have the final say over the choice of plans. Egan called his quasi-public agency’s role that of a “second tier” partner in the effort.

A big catch in the plans for a new facility is that there has to be some ongoing way to dispose of all those hundreds of thousands of tons a year of refuse while a new system is created. Presumably, that means the South Meadows plant will need to keep burning trash until the new program comes on line — not a prospect that makes Hartford or Connecticut’s environmentalists very happy.

Another potential flashpoint is that there will be some continuing degree of trash incineration for a long time to come. Even if the state achieves its goal of 60 percent recycling, that still leaves a lot of refuse to be disposed of either by burning or buried in a landfill.

“It has a really nasty environmental impact,” said Chris Phelps, state director of Environment Connecticut, said of burning trash for energy. He said Hartford’s hesitation about continuing to play host to such a plant “is a really understandable attitude for people … who have been living with that incineration literally in their backyard for years.”

Chertow, once president of the CRRA, said any new refuse system at the Hartford location is very likely to require a deal that offers serious incentives for the city. “I think you have to be kind to host communities,” she said.

Part of the answer could be diverting more recyclable trash to smaller satellite facilities outside Hartford, according to Chertow. Those could include composting and anaerobic digestion plants, which could reduce the flow of trucks and garbage into a central Hartford facility.

Bronin said that, if Hartford is going to be convinced to allow a new or rehabilitated refuse plant in the city, it would need to be “as clean as possible, as small as possible.” Such an agreement could also include increased payments in lieu of taxes, related economic development, and maybe a microgrid, said Bronin.

“The state is developing a comprehensive waste management plant that will keep [disposal] costs down for all municipalities in the state,” said Bronin. “It’s important that one municipality alone is not bearing all the burden of the costs associated with that.”