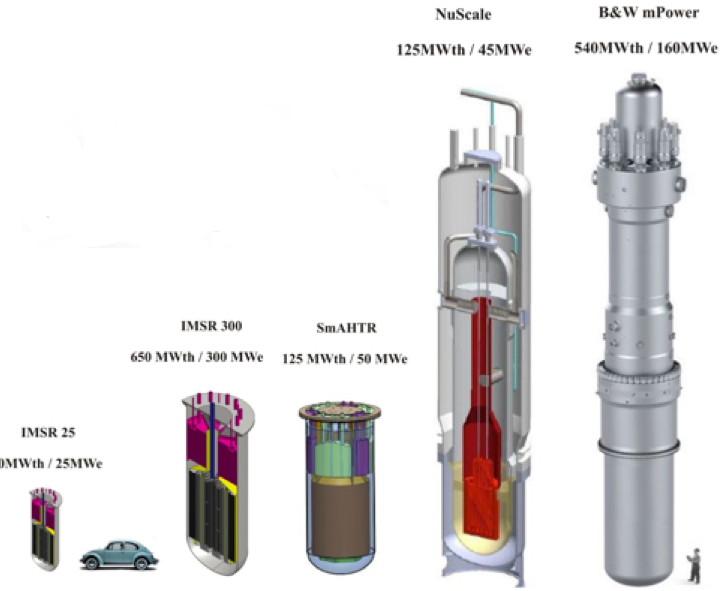 The small nuclear reactors are intended for industrial process heat markets, with market deployment targeted “in the 2020s.”

Oak Ridge National Laboratory (ORNL) built and operated the first molten salt reactor (MSR) in the late 1960s. It was a 7.4-megawatt (thermal) test unit, and its design was being considered for a nuclear-powered bomber. Terrestrial Energy’s reactor is based on ORNL’s denatured MSR design.

Since then, R&D in this advanced nuclear technology, in the U.S. at least, has been scant, even as this country’s light water reactor nuclear fleet has continued to age. The nation’s technological and market edge in nuclear may have been lost to countries such as China, Japan, Russia, India and France.

The MSR is an advanced design in which the coolant is a molten salt, typically a fluoride salt mixture. In most designs, the nuclear fuel is dissolved in the coolant itself. MSRs run at higher temperatures and higher efficiencies than water-cooled reactors.

TEI hopes to begin commercial deployment of its molten salt reactor technology by early next decade. The company claims that MSR technology provides improved safety and better control of waste and proliferation. TEI CEO Simon Irish has claimed that the reactor “will cost about the same to build as a coal power plant, but will cost much less to run than a traditional nuclear plant.”

Such is the aspirational nature of startup CEO language.

Terrestrial’s MSR is a modular design, able to range from 80 megawatts to 600 megawatts, and targeted at remote, military, or industrial sites, both on- and off-grid.

Using the small modular reactor (SMR) concept, reactors can be built in factories and shipped to the site already constructed, rather than being built — expensively and riskily — on site. Rather than engineer and build reactors capable of producing more than 1 gigawatt of electric power, SMRs can produce 10 megawatts to 6,000 megawatts of electricity (or heat).

SMRs are not a new concept. The U.S. Army has built and operated small nuclear power plants in the past, and the military continues to use small reactors to power naval vessels. But the incremental construction scheme of civilian SMRs aims to reduce financial and safety risks, though this has not yet been demonstrated.

SMR startup NuScale was founded in 2007 based on research conducted at Oregon State University and raised $35 million in VC funds to develop its light water SMR. Currently, the company’s major shareholder is Fluor.

As far as MSRs are concerned, this is early days. Less is known about MSR designs compared to the knowledge gained from millions of operational hours of light water reactors.

But the regulatory challenge of MSRs could be more of an obstacle than the physics or finance. The Nuclear Regulatory Commission has regulated more than 100 reactors in the U.S., none of which are based on this design. It will require an enormous institutional adaptation to get this technology commercialized — and an enormous amount of funding.

Greentech Media has taken detailed looks at small modular reactors, including those from B&W, NuScale, Radix and Hyperion, fusion technology from General Fusion and Tri Alpha, and nuclear waste disposal from Kurion. We’ve reported on the Khosla- and Bill Gates-funded TerraPower. We’ve looked at the thorium fuel cycle, as well as the painful economic realities of nuclear plant construction. We reported on the first nuclear plant construction that the Nuclear Regulatory Commission has approved in 35 years. In 2014, the Department of Energy announced the availability of $12.5 billion in loan guarantees for advanced reactor designs or enrichment processes.

Nuclear provides 19 percent of U.S. electricity generation and is carbon-free in operation. It’s baseload power with a low price per kilowatt-hour, but it’s very expensive to build, and even light water reactors are already harrowingly difficult to finance.

“Funds will be used to support the company’s pre-construction and pre-licensing engineering, and to support further engagement with industry and nuclear regulators,” said Terrestrial Energy’s CEO.