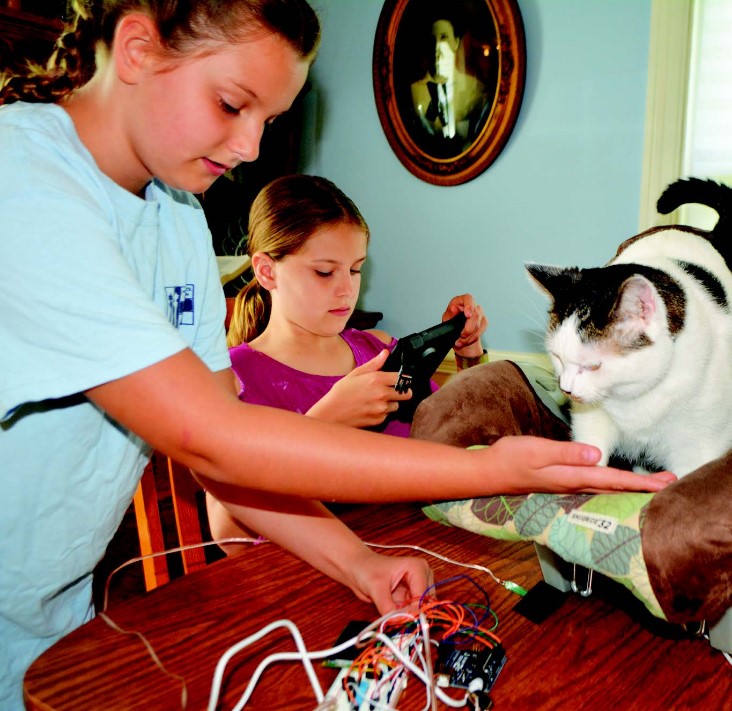 Lydia Denton, co-winner of the “I’m the Teacher Now” ORISE student competition, recently won the $20,000 grand prize in the Citgo Discovery Education competition with the “Beat the Heat” car seat. Lydia’s invention aims to prevent hot car deaths by measuring the car’s temperature and alerting parents and emergency officials when the temperature inside the car reaches 102 degrees. She and her siblings used the iPads won from the ORISE student competition in 2019 to create the car seat and work on other STEM projects. Since then, their innovative work has been shared nationally by Good Morning America and People.com.

How it all started:

When combining design thinking with the right technology, the family cat and the imaginations of three young scientists, the result is an invention that might one day save lives.

During the summer of 2018, news of multiple children dying in hot cars caught the attention of 11-year-old Lydia Denton (pictured, standing). She and her 9-year-old sister Bethany (pictured, seated) began to brainstorm creative solutions to alert parents when they have left children in a hot car.

The following spring break of 2019, the sisters began building a prototype for the “Beat the Heat Car Seat.” Shortly after beginning their prototype, Lydia and Bethany entered the ORISE

“I’m the Teacher Now” competition, which tasked students with creating a short, original presentation that creatively explained or demonstrated a scientific concept of their choice to a younger student. Both girls were chosen as winners and each received an iPad, among other prizes.

Lydia, Bethany and their 13-year-old brother, Elijah, worked together to build a circuit board, program a microchip and gather necessary materials such as thermometers, pressure pads and a buzzer. The siblings used their pet, Baby Cat, as the test subject in the car seat because he weighs about the same as a newborn. It took many months of testing and redesigning, but after more than 100 tries, the siblings celebrated multiple successful tests.

“I think our whole neighborhood heard us scream in excitement,” explained Lydia when asked about the first time the sensor worked as designed.

“The iPads we won from ORISE were helpful as we were building the sensor, because they allowed us to work anywhere in the house and garage while learning new skills, like how to miter and solder,” explained Lydia.

The final prototype includes an LCD display system, a temperature detector, a microchip, a reset button and a pressure pad to sense weight. The pressure pad is placed in the bottom of the car seat and set to four pounds while a temperature gauge keeps track of the temperature inside the car. The device also has a SIM card built-in, just like a cellphone, that identifies its location.

“The device detects the temperature around it, and if it gets above 102 degrees Fahrenheit, then it automatically texts the contact, and they have one minute to respond before the device dials 911 to come and save the child,” Lydia explained.

The siblings hope to create an affordable, stand-alone unit that parents can strap to the side of any car seat. “Our goal is to make this as cheap as possible so that any family can afford it,” Bethany said. “The possibility of saving lives is the best part of this experience,” added Lydia.

The three siblings are still improving the prototype. They presented their invention to more than 75 entrepreneurs during Eastern North Carolina’s Innovation Hub Gig East meet-up series with the hopes that someone will take an interest in the product and provide investment capital.

Both Lydia and Bethany have learned many important lessons during the nine months it took to brainstorm, build and test their “Beat the Heat Car Seat,” and they are using their newly gained knowledge to create new inventions. Lydia plans to work on a product to prevent child drownings while Bethany is designing a chemical spray that will detect traces of salmonella on food.