Senate Panel Set to Confirm Trump Appointees for TVA Board

Senate Panel Set to Confirm Trump Appointees for TVA Board

The four nominees for the Tennessee Valley Authority board on Tuesday praised the federal utility and its strategy to diversify its power generation.

In a confirmation hearing before the Senate Environment and Public Works Committee, those recommended for the TVA board by President Donald Trump voiced support for TVA’s recent investments in nuclear power and said it is not realistic in the foreseeable future to get all of America’s power from renewable sources that exclude fossil fuel and nuclear power. 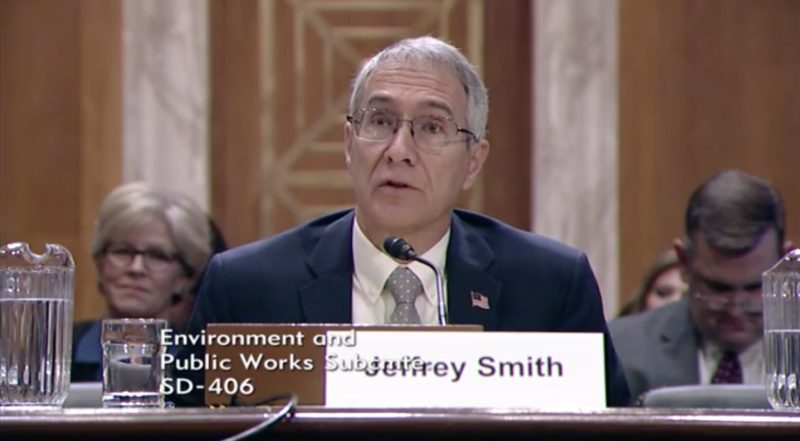 Jeffrey Smith speaks to a subcommittee of U.S. senators about his nomination as TVA board member. (Credit: SENATE.GOV)

“I think nuclear is an important part of the generation mix that TVA needs to continue to supply to the region,” said Jeff Smith, deputy director of the Oak Ridge National Laboratory in Tennessee, which spends nearly $1.4 billion a year on research on nuclear power and other technologies. “TVA should be commended, in my opinion, for successfully starting up Watts Bar Unit 2. We tend to be struggling as a country right now in starting up new nuclear plants. But I can see TVA being an important provider of power generated from nuclear assets for a long time in the future.”

TVA has built the last two commercial nuclear reactors in the United States at its Watts Bar plant near Spring City, Tenn., and is studying the feasibility of building small modular reactors on the Clinch River in Oak Ridge.

The Southern Co., and other Georgia utilities, including Dalton Utilities, are building two more reactors at Plant Vogtle in Georgia. Other U.S. utilities have scrapped or delayed plans for additional nuclear power while others are retiring older nuclear plants.

None of the TVA nominees suggested that TVA should reverse its move away from coal-fired generation, which once supplied two thirds of TVA power and is on pace to generate only 20 percent of TVA’s electricity by 2020. TVA has retired about half of the 59 coal-fired units it once operated.

But Kenny Allen, a retired executive who has defended the coal industry throughout his career at Armstrong Coal Co., said coal and other fossil fuels are needed to help generate electricity, which he said “is the very foundation of our standard of living.”

Senate Majority Leader Mitch McConnell, R-Ky., said Allen “understands the challenge of the coal industry in our state” and will bring that perspective to the TVA board.

U.S. Sen. Jim Inhofe, R-Okla., who criticized former President Barack Obama for what he said was his opposition to more fossil fuel or nuclear power plants, asked each of the TVA nominees if they thought TVA could move totally away from coal, gas and nuclear power in the foreseeable future. All four of the nominees said they didn’t think that was possible.

U.S. Sen. Sheldon Whitehouse, D-Rhode Island, and the ranking member of the panel, said he worries if TVA will meet its goals to add between 150 and 800 megawatts of large-scale solar to its portfolio by 2023 and even more renewable energy over the following decade.

“These renewable goals are worth pursuing, but the heavy lifting has yet to be done,” Whitehouse said. “Independent regulators are being pressured by this administration to reject market forces to prop up the fossil fuel industry.”

In addition to Smith and Allen, Trump has nominated James R. Thompson III, executive vice president of corporate billing at National Commerce Corp. in Alabama and a member of the Decatur Utilities board, and A.D. Frazier, president emeritus of Georgia Oak Partners and former chairman of Gold Kist Inc., former president of Caremark RX and the chief operating officer of the 1996 Atlanta Committee on the Olympic Games in Georgia.

Frazier, who lives in Mineral Bluff, Ga., near TVA’s Blue Ridge reservoir, said the Tennessee Valley Authority has helped shape the economy and environment of its seven-state region.

“I cannot imagine the Appalachian region without the TVA,” he said.

Asked about one of TVA’s biggest fiscal challenges — its underfunded employee pension fund that needs an extra $4.6 billion to be actuarially sound — Frazier said he is confident the shortfall can be addressed over the next decade.

“In 2017, TVA supplemented its $300 million contribution (to the pension fund) with an extra $500 million and they expect to do the same this year,” Frazier said. “The good news is that this company is generating enough cash flow to make those additions so I am optimistic about TVA’s ability to fund this (pension). It will take years, but at the present course and speed they will do it.”

Thompson, who grew up water skiing on TVA lakes in North Alabama, also praised the recreational benefits from the Tennessee Valley Authority and the 49 dams it operates on the Tennessee River and its tributaries.

“Some of my most cherished memories are times I have spent with my family on the Tennessee River,” he said. “For this, TVA’s environmental focus and flood control deserve much of the credit.”

The Senate is expected to vote next month to confirm the TVA board nominees to ensure that the 9-member TVA board maintains a quorum to conduct business after the terms of four directors have already expired this year.

The TVA nominees gained the support of senators from their home states and after Tuesday’s hearing, U.S. Sen. Shelley Moore Capito, R-W. Va., who chaired the hearing, said she plans to vote to confirm the TVA nominees in the committee and ultimately on the floor of the U.S. Senate.

If confirmed, the four new board members will join Chairman Richard Howorth of Mississippi and Virginia Lodge, Ronald Walter and Eric Satz of Tennessee on the TVA board.

The full TVA board meets quarterly and will next meet as an entire board in February. But board committees meet more often to oversee TVA and chart its direction.

TVA directors are each paid $51,005 a year, plus extra pay for chairing a committee or the overall board.

TVA is the nation’s largest government-owned utility and provides wholesale electricity to 155 municipalities and power cooperatives that collectively serve more than 9 million persons.