In an address last week, Defense Secretary Ash Carter provided an update on the Defense Department’s efforts to facilitate work with innovation-centric companies and to strengthen relations with researchers and engineers who might otherwise not work on defense problems. These efforts are part of DOD’s Third Offset Strategy and its campaign to build a “Force of the Future.”

It has now been nearly two years since the Defense Department began promoting its Third Offset Strategy. The strategy aims to maintain U.S. superiority in conventional warfare against near-peer adversaries by investing in technologies that will give U.S. forces a critical edge in combat operations. With the current presidential administration approaching its end, Defense Secretary Ash Carter has been working to perpetuate what he refers to as the “logic” of the strategy within department policies and practices.

On Oct. 28, at a daylong forum at the Center for Strategic and International Studies (CSIS) dedicated to the Third Offset Strategy, Carter outlined the steps DOD is taking to implement the strategy, including changes it is making to how the department interacts with organizations and individuals not ordinarily engaged with national security matters.

While the Third Offset Strategy revolves around technology and innovation, the strategy’s architects emphasize that, at its most fundamental level, it is about developing quicker and more effective ways to select, develop, acquire, and implement technology. Carter himself has made understanding the complex relations between technology and military strategy a hallmark of his career, having trained in theoretical physics and worked for many years as a scholar of defense policy. In his CSIS address, he remarked,

While the Cold War arms race was characterized by the inexorable but steady accumulation of strength—with the leader simply having more, bigger, or better weapons—today’s era of military competition is characterized by the additional variables of speed and agility, such that leading the race now frequently depends on who can out-innovate faster than everyone else, and even change the game. In the area of investment, it’s no longer just a matter of what we buy. Now more than ever, what also matters is how we buy things, how quickly we buy things, whom we buy them from, and how rapidly and creatively we can adapt them and use them in different and innovative ways—all this to stay ahead of future threats and future enemies technologically.

For this reason, Carter has insisted on developing policies and initiatives for innovation that stretch across the technical, administrative, and operational facets of DOD, and that connect DOD more thoroughly with industry.

Some of Carter’s most prominent initiatives have entailed developing stronger relations with innovation-focused firms that have not traditionally worked with DOD. DOD’s Defense Innovation Unit Experimental (DIUx) opened in Silicon Valley in 2015 to pursue partnerships there, and this year DIUx opened additional offices in the innovation hubs of Boston and Austin, Texas.

Earlier this year, DOD also established a Defense Innovation Board, chaired by Eric Schmidt, the chairman of Google parent company Alphabet, Inc. On Oct. 5, the board issued a suite of “interim” recommendations aimed at improving DOD’s capabilities in computer science and related fields, and its ability to conduct business in fast-moving markets. At the CSIS event, Carter announced that DOD plans to move forward with suggestions to expand recruitment of computer scientists and software engineers, as well as to launch “targeted challenges and prize competitions” and to establish a “virtual center of excellence” in the field of machine learning. Finally, DOD will appoint a Chief Innovation Officer to “serve as a spearhead for innovation activities, including but not limited to those suggested by the Defense Innovation Board.”

STEM personnel a key focus in building ‘Force of the Future’

While Carter has worked visibly to improve DOD’s relations with commercial firms, in his CSIS address he also emphasized the department’s desire to raise individual researchers’ and engineers’ interest in working for or with the military, and to reduce the burden of doing so. This focus on technical personnel is part of a broader DOD effort to build up what it calls the “Force of the Future.”

Carter recounted how over the past year he has been announcing a series of “links” to this force. The first link is increasing the number of “on-ramps and off-ramps” that allow “technical talent” to begin and end work with the military more easily, including by creating a Defense Digital Service and expanding the Secretary of Defense Corporate Fellows Program. The second link entails increasing support for military families. The third link involves making “common-sense improvements to military talent management,” including expanding “lateral entry for more specialties,” i.e., allowing skilled civilians to enter the officer corps at an appropriate rank.

Carter also observed that DOD had opened all combat positions to women and lifted DOD’s ban on transgender service members. This, he said, will allow DOD to “draw on 100 percent of America’s population for our all-volunteer force—focusing purely on a person’s willingness and ability to serve our country and contribute to our mission, and giving everyone the full and equal opportunity to do so.”

On Nov. 1, at an event at the City College of New York, Carter announced two further links to the Force of the Future: a concerted effort to broaden DOD’s geographic and demographic reach in recruitment, and a reinvigoration of Reserve Officer Training Corps (ROTC) programs at colleges and universities, which includes expanding ROTC outreach to women and minorities studying science, technology, and mathematics.

Even as DOD adjusts its recruitment and personnel management to build the Force of the Future, the department is recalibrating its research and engineering priorities to strike a stronger balance between advancing “Today’s Force,” the “Next Force,” and the “Force after Next.”

At another CSIS event held on Sept. 15, Stephen Welby, the assistant secretary of defense for research and engineering, explained that funding for DOD’s basic and applied research programs addressing long-term goals has remained stable in recent years. By comparison, near-term development and testing activities have experienced significant budgetary pressure. Welby remarked that equipment programs currently in procurement have not been “preceded by advanced research and development activity,” and are focused more on “life extension or more limited upgrades rather than full system development.” In his view, this approach risks allowing adversaries to begin to match U.S. capabilities. But, he argued, the situation also represents “an opportunity for the department to rethink and recapitalize that portion of the new product pipeline in the future,”which would ultimately allow DOD to field the transformative capabilities envisioned by the Third Offset Strategy. 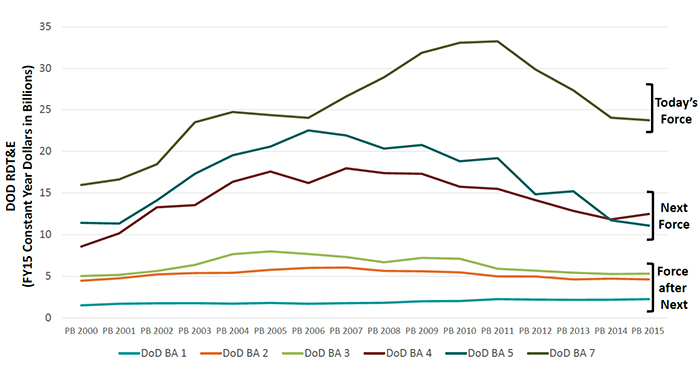 A slide presented by Stephen Welby illustrating trends in funding appropriations from fiscal year 2000 to the present for DOD’s research, development, testing, and evaluation accounts.

In his remarks at last week’s CSIS event, Carter highlighted the role of DOD’s labs and research centers in technology development. As reported in FYI #125, at a recent hearing, DOD lab leaders also expressed confidence in their ability to transfer R&D projects to the field at the pace the Third Offset Strategy demands. While pleased with the quality of talent they are able to attract, the leaders did complain that administrative difficulties do sometimes cause the labs to lose opportunities to recruit some “very high-quality candidates.”

In February, the Defense Science Board began conducting a sweeping assessmentof the defense research enterprise. Inside Defense reported in September that the Defense Innovation Board has formed a subcommittee to conduct a separate survey of DOD’s science and technology “ecosystem” and to report back by December.