Scientists Studying the Smallest Particles in the Universe with Supercomputers Aid

Scientists Studying the Smallest Particles in the Universe with Supercomputers Aid 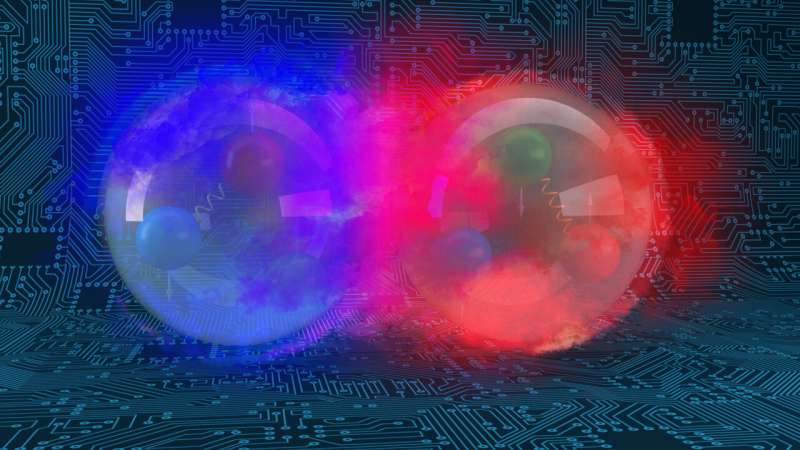 This image of a deuteron shows the bound state of a proton, in red, and a neutron, in blue. Credit: Andy Sproles/ORNL, U.S. Dept. of Energy

Since the 1930s, scientists have been using particle accelerators to gain insights into the structure of matter and the laws of physics that govern our world. These accelerators are some of the most powerful experimental tools available, propelling particles to nearly the speed of light and then colliding them to allow physicists to study the resulting interactions and particles that form.

Many of the largest particle accelerators aim to provide an understanding of hadrons—subatomic particles such as protons or neutrons that are made up of two or more particles called quarks. Quarks are among the smallest particles in the universe, and they carry only fractional electric charges. Scientists have a good idea of how quarks make up hadrons, but the properties of individual quarks have been difficult to tease out because they can’t be observed outside of their respective hadrons.

Using the Summit supercomputer housed at the Department of Energy’s Oak Ridge National Laboratory, a team of nuclear physicists led by Kostas Orginos at the Thomas Jefferson National Accelerator Facility and William & Mary has developed a promising method for measuring quark interactions in hadrons and has applied this method to simulations using quarks with close-to-physical masses. To complete the simulations, the team used a powerful computational technique called lattice quantum chromodynamics, or LQCD, coupled with the computing power of Summit, the nation’s fastest supercomputer. The results were published in Physical Review Letters.