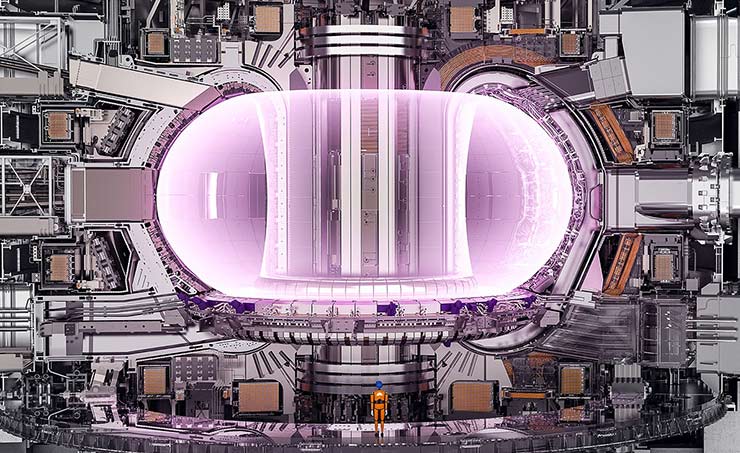 An illustration of the ITER tokamak, a device designed to magnetically confine burning plasmas. Its ultimate aim will be to produce self-sustaining thermonuclear fusion reactions that produce more energy than they consume. A human figure at the bottom center of the image provides a sense of scale. (Image credit – ITER)

In recent years, the committee has shown strong, bipartisan support for fusion energy research. In his opening statement, Committee Chair Lamar Smith (R-TX) lauded fusion’s potential to “reduce carbon emissions by a huge amount with major implications for climate change.” Although Smith has strongly criticizedclimate science, he often promotes technology as a means of achieving environmental goals without new regulation. He went on, “While we cannot predict when fusion will be a viable part of our energy portfolio, it is clear that this is critical basic science that could benefit future generations.”

Much of the hearing was dedicated to the prospects of current fusion programs. However, Van Dam noted that DOE is also planning future research directions based on a variety of strategic exercises. These, he reported, will include the National Academies strategic planning study on burning plasma currently underway and a decadal survey for plasma science that will launch soon with the aim of releasing its report in 2020.

Wade testified that U.S. leadership in fusion science is in danger as other nations increase their emphasis on the area. He said the U.S. needs a comprehensive strategic plan to capitalize on current work and set the nation on an “aggressive, distinctive pathway to fusion energy,” which would include investment in “world-class research capabilities.”

A primary focus of the hearing was U.S. participation in the France-based ITER magnetic confinement fusion (MCF) project, which aims to produce fusion reactions at full power in 2035.

The last time the Science Committee addressed fusion research, in March 2016, U.S. participation in ITER was in doubt due to concerns about its management. Shortly thereafter, DOE recommended continued support through fiscal year 2018 and to reassess the situation before the fiscal year 2019 budget request. Meanwhile, spurred by skeptical Senate appropriators, Congress took even stronger steps, withholding U.S. cash contributions to the project (but not in-kind contributions of equipment), beginning with fiscal year 2016 appropriations.

The issue of U.S. participation remains unresolved. Currently, the Trump administration is proposing to provide $75 million in in-kind contributions for fiscal year 2019. It is leaving a decision on U.S. participation beyond that to a comprehensive review of civil nuclear activities currently underway.

At the hearing, Smith reiterated his support for full participation. He noted that under the U.S. commitment to fund 9 percent of ITER’s costs, DOE is supposed to provide $163 million in in-kind contributions and $50 million in cash contributions in fiscal year 2019. He warned that falling short would lead to construction delays and cost increases and it could also jeopardize other scientific collaborations and damage the position of U.S. research. He said,

With countries like India, Japan, China, and Russia partnering through ITER to produce and share cutting-edge fusion research, we cannot afford to lose our seat at the table. In addition, we cannot expect to receive international support for our domestically hosted global research projects, like the high-priority Long-Baseline Neutrino Facility at Fermilab, if we do not honor our international obligations.

Subcommittee Chair Randy Weber (R-TX) asked Bigot about the impacts of the U.S. failing to meet its commitments. Bigot replied that U.S. cash contributions are needed to keep the project on budget and particularly stressed the importance of U.S. in-kind contributions, saying that “if a component is not on-site and under specification, on time, it will stop the whole project.”

Aside from testifying at the hearing, Bigot has been visiting U.S. stakeholders, warning that if DOE does not uphold its commitments, ITER might have to announce a delay as early as June, which would raise costs for other partner nations. In his written testimony and in an exchange with Rep. Bill Foster (D-IL), Bigot sought to assure the committee that management reforms he had undertaken after taking over ITER in 2015 had placed the project on a sound footing.

Rep. Zoe Lofgren (D-CA), sitting in as subcommittee ranking member, argued it is no longer justifiable to withhold contributions, saying,

Given the remarkably impressive progress made by Dr. Bigot and his team in getting this project back on track, [the president’s] budget request now essentially undermines all of our prior efforts and could end up causing the problems that we worked so hard to resolve.

Except for Rep. Dana Rohrabacher (R-CA), no committee member questioned whether ITER would fulfill its promise as a crucial step to realizing fusion energy. Asked by Rep. Neal Dunn (R-FL) why scientists are confident in ITER, Wade replied that the high level of confidence is rooted in research done to date. He remarked,

I have worked in this field a long time and I have watched the progression of our understanding. And I believe our understanding is sufficient to have high confidence if ITER with its systems can deliver the technical capability, the physics will be there to deliver the power that is projected.

Another focus of the hearing was inertial confinement fusion (ICF), which uses high-energy lasers to compress thermonuclear fuel pellets so that the nuclei of their constituent atoms fuse together. Currently, NIF is the world’s leading institution for ICF research.

The Trump administration is proposing to cut the budget of the National Nuclear Security Administration’s ICF program by over $100 million, or 20 percent. Within that, the budget for efforts to achieve ignition, a self-sustained thermonuclear reaction, would be cut by over 70 percent, from $78 million to $22 million. Support for academic research in high energy density laboratory plasmas would be eliminated, and NNSA would begin a three-year withdrawal of funding for the Laboratory for Laser Energetics (LLE) at the University of Rochester.

Herrmann said the proposed cuts would disrupt the progress of NIF experiments necessary for NNSA’s Stockpile Stewardship Program and shut down the pipeline of students and early-career researchers that replenishes the ICF workforce.

He also advocated for vigorously pursuing ignition, not only because of its usefulness in stockpile stewardship but also because of ICF’s potential as an energy source. While noting that NNSA does not pursue energy R&D, he pointed to a conclusion of a 2013 National Academies report that the appropriate time to initiate a large-scale inertial fusion energy program would be once ignition is achieved. A 2016 NNSA report suggested NIF might never be able to achieve ignition and set a goal of 2020 to assess the facility’s efficacy for doing so. Herrmann said NIF remains on track to meet that goal and expressed optimism that ignition would ultimately prove feasible.*

Lofgren, whose district is close to Livermore, recounted her 25-year interest in fusion energy and NIF, and expressed support for pursuing both ICF and MCF as paths to fusion energy.

Rep. Paul Tonko (D-NY), the only committee member from New York, spoke in favor of LLE and asked the witnesses if they knew the rationale for shutting it down. Herrmann replied that the budget request indicated there are “higher priorities” but said he had heard no further details in his communications with DOE.

*Correction: This sentence originally incorrectly stated that Herrmann said NIF is on track to achieve ignition by 2020.