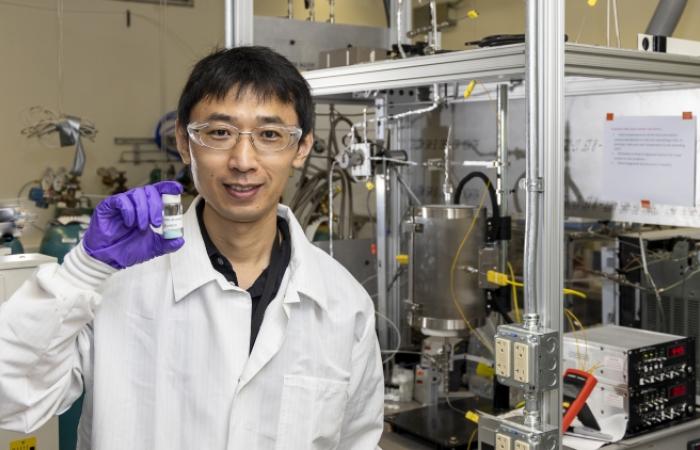 Zhenglong Li, an ORNL scientist in the Energy and Transportation Science Division, holds a sample of a catalyst material used to covert ethanol into butene-rich mixed olefins, important intermediates that can then be readily processed into aviation fuels. Credit: Carlos Jones/ORNL, U.S. Dept. of Energy

Prometheus Fuels has licensed an ethanol-to-jet-fuel conversion process developed by researchers at the Department of Energy’s Oak Ridge National Laboratory. The ORNL technology will enable cost-competitive production of jet fuel and co-production of butadiene for use in renewable polymer synthesis.

The mission of Prometheus Fuels, a startup based in Santa Cruz, California, is to remove carbon dioxide from the air and turn it into net-zero carbon gasoline and jet fuel. Rob McGinnis, the company’s founder, said, “ORNL’s technology is important to ensuring our fuel meets international standards.”

The current state-of-the-art process for converting biomass-derived ethanol into aviation fuels is a costly endeavor, both in terms of energy use and capital cost.

Zhenglong Li, an ORNL scientist and the inventor of this technology, and his team in the Energy and Transportation Science Division simplified the process by developing a catalyst material that can directly convert ethanol into butene-rich mixed olefins, important intermediates that can then be readily processed into aviation fuels.

“This technology bypasses an energy-intensive ethanol dehydration step and achieves highly selective formation of butene-rich olefins in one step, where a two-step process is usually adopted in the industry. Our reaction does not require significant energy input; instead it releases some energy that can be utilized for other parts of the process,” Li said. “High selectivity of the mixed olefins formation also enables high jet fuel yield.

“This process offers an opportunity for industry to reduce operation and capital costs associated with renewable jet fuel production.”

The fuel created through this process offers improved properties over what’s in use currently in the aviation industry. For example, the freezing point — a critical property for aviation fuel — is much lower than the current standard. With a slight variation, the same process can also convert ethanol into 1,3-butadiene, a precursor material that can be used to make rubber and polymer products.

Li’s team specializes in heterogeneous catalysis and is focused on developing various catalysts and catalysis technologies for converting biomass or other sustainable feedstocks into hydrocarbon fuels and high-value co-products.

Prometheus Fuels has drawn interest from a range of major industry players including BMW i Ventures, Boom Supersonic, Y Combinator, and the Department of Energy. In a flight planned for 2021, Boom will use Prometheus jet fuel to test the design of its supersonic commercial jet.

The agreement was negotiated by ORNL’s Technology Transfer Office.

The research was supported by the DOE Office of Energy Efficiency and Renewable Energy’s Bioenergy Technologies Office; and in collaboration with the Chemical Catalysis for Bioenergy (ChemCatBio) Consortium, a member of the Energy Materials Network.

UT-Battelle manages ORNL for the Department of Energy’s Office of Science, the single largest supporter of basic research in the physical sciences in the United States. The Office of Science is working to address some of the most pressing challenges of our time. For more information, please visit energy.gov/science.