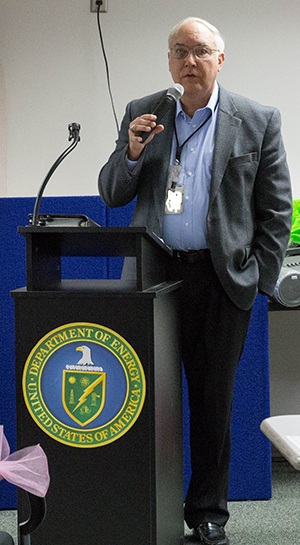 EM Office of River Protection (ORP) Manager Kevin Smith retires at the end of this month after more than 40 years of federal service, including 13 with EM and the National Nuclear Security Administration (NNSA).

During a Sept. 27 ceremony marking his retirement, Smith summarized the progress he believes ORP has made during his tenure as manager, saying the office has paved “a solid path for mission completion.”

Smith began serving as ORP manager in early 2013, working to secure focus on the Direct Feed Low Activity Waste approach at the Hanford Waste Treatment and Immobilization Plant (WTP), intended to begin processing tank waste at Hanford as soon as 2022. ORP continued progress on other portions of the WTP, including completing a Preliminary Documented Safety Analysis — the basic nuclear safety document for design — for the WTP High-Level Waste Facility. In addition, ORP made headway retrieving waste from Hanford’s aging single-shell tanks for storage in the site’s double-shell tanks.

Smith said he had worked to “leave things better than when I arrived.”   He joined DOE in 2004 after a career as an officer in the U.S. Air Force, which included serving in several senior positions, including the commander of the 49th Operations Group at Holloman Air Force Base and F-16 Squadron commander at Luke Air Force Base.

In 2005, Smith was awarded the DOE John B. Whitsett Technical Manager of the Year Award, in 2006 the DOE Exceptional Service Medal, in 2013 the NNSA Distinguished Service Gold Medal, in 2015 the Secretary of Energy’s Honor Award, and in 2016 the Presidential Rank Award.

“I want to thank you personally and professionally,” Smith said at the ceremony. “Please know that ORP is in a different place and you have a lot to be proud of.  I encourage you to keep being a high-performing organization and to keep your eye on the prize, keeping the Columbia River safe for future generations.”