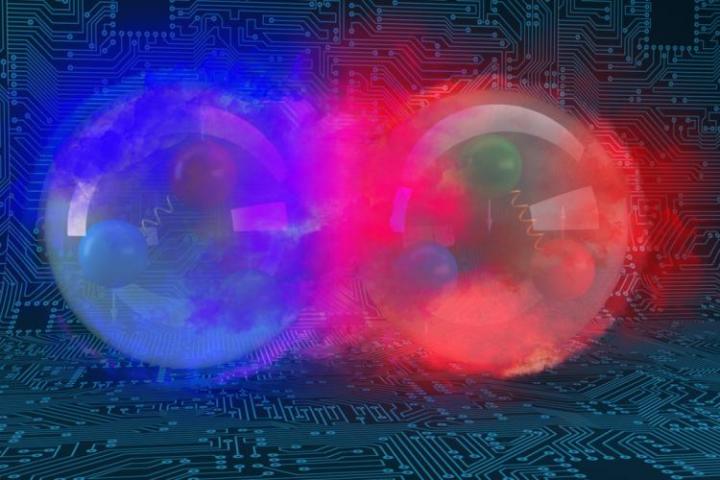 The Department of Energy’s Oak Ridge National Laboratory is the recipient of six awards from DOE’s Office of Science aimed at accelerating quantum information science (QIS), a burgeoning field of research increasingly seen as vital to scientific innovation and national security.

The awards, which were made in conjunction with the White House Summit on Advancing American Leadership in QIS, will leverage and strengthen ORNL’s established programs in quantum information processing and quantum computing.

The application of quantum mechanics to computing and the processing of information has enormous potential for innovation across the scientific spectrum. Quantum technologies use units known as qubits to greatly increase the threshold at which information can be transmitted and processed. Whereas traditional “bits” have a value of either 0 or 1, qubits are encoded with values of both 0 and 1, or any combination thereof, at the same time, allowing for a vast number of possibilities for storing data.

While in its infancy, the technology is being harnessed to develop computers that, when mature, will be exponentially more powerful than today’s leading systems. Beyond computing, however, quantum information science shows great promise to advance a vast array of research domains, from encryption to artificial intelligence to cosmology.

“Software Stack and Algorithms for Automating Quantum-Classical Computing,” a new project supported by the Office of Advanced Scientific Computing Research, will develop methods for programming quantum computers. Led by ORNL’s Pavel Lougovski, the team of researchers from ORNL, Johns Hopkins University Applied Physics Lab, University of Southern California, University of Maryland, Georgetown University, and Microsoft, will tackle translating scientific applications into functional quantum programs that return accurate results when executed on real-world faulty quantum hardware. The team will develop an open-source algorithm and software stack that will automate the process of designing, executing, and analyzing the results of quantum algorithms, thus enabling new discovery across many scientific domains with an emphasis on applications in quantum field theory, nuclear physics, condensed matter, and quantum machine learning.

ORNL’s Stephen Jesse will lead the “Understanding and Controlling Entangled and Correlated Quantum States in Confined Solid-State Systems Created via Atomic Scale Manipulation,” a new project supported by Basic Energy Sciences that includes collaborators from Harvard and MIT. The goal of the project is to use advanced electron microscopes to engineer novel materials on an atom-by-atom basis for use in QIS. These microscopes, along with other powerful instrumentation, will also be used to assess emerging quantum properties in-situ to aid the assembly process. Collaborators from Harvard will provide theoretical and computational effort to design quantum properties on demand using ORNL’s high-performance computing resources.

ORNL is also partnering with Pacific Northwest National Laboratory, Berkeley Laboratory, and the University of Michigan on a project funded by the Office of Basic Energy Sciences titled “Embedding Quantum Computing into Many-Body Frameworks for Strongly-Correlated Molecular and Materials Systems.” The research team will develop methods for solving problems in computational chemistry for highly correlated electronic states. ORNL’s contribution, led by Travis Humble, will support this collaboration by translating applications of computational chemistry into the language needed for running on quantum computers and testing these ideas on experimental hardware.

ORNL will support multiple projects awarded by the Office of High Energy Physics to develop methods for detecting high-energy particles using quantum information science. They include:

UT-Battelle manages ORNL for DOE’s Office of Science. The single largest supporter of basic research in the physical sciences in the United States, the Office of Science is working to address some of the most pressing challenges of our time. For more information, please visit https://science.energy.gov/.