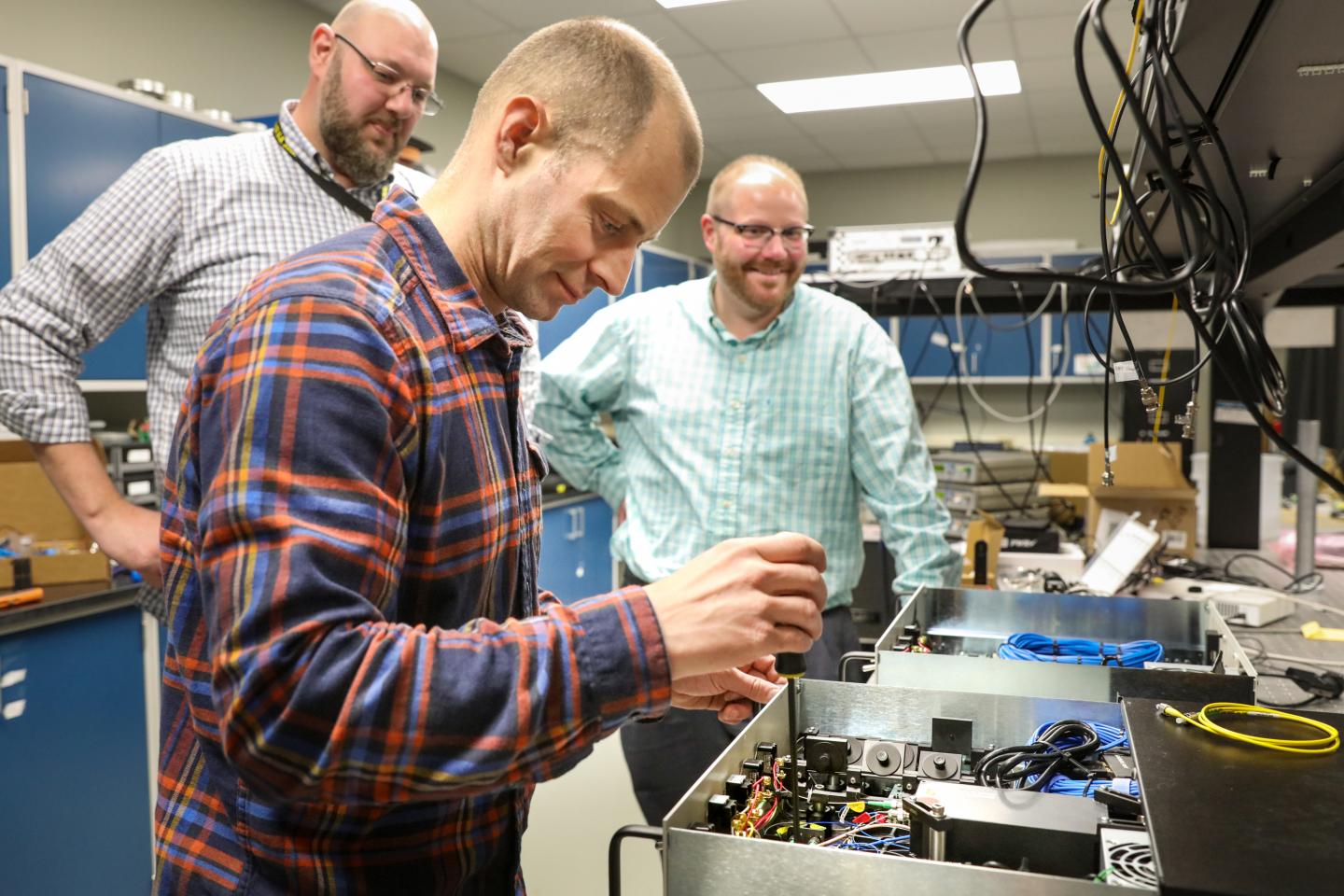 For the second year in a row, a team from the Department of Energy’s Oak Ridge and Los Alamos national laboratories led a demonstration hosted by EPB, a community-based utility and telecommunications company serving Chattanooga, Tennessee.

Using an isolated portion of EPB’s fiber-optic network, the team experimented with quantum-based technologies that could improve the cybersecurity, longevity and efficiency of the nation’s power grid. Among other successes, the researchers drastically increased the range that these resources can cover in collaboration with their new industry partner, Qubitekk.

The team tested quantum key distribution, or QKD, systems that harness the power of quantum mechanics to authenticate data and encrypt messages with a secret “key.” Using private encryption methods, the key securely transmits “locked” information from one QKD system to another through a “trusted node” that is virtually invulnerable to cyberattacks.

“This technology relies not on the mathematical laws that govern modern computer security but on the physical laws of quantum mechanics that do not change over time,” said Raymond Newell, who leads LANL’s quantum communications team. “As a result, we can make security assurances that will remain true indefinitely because they do not rely on assumptions.”

Last year, ORNL, LANL and EPB demonstrated that QKD systems could work together seamlessly despite having different underlying hardware and software components, an important step toward eventually incorporating QKD into the grid — which provides electricity to buildings throughout the United States — on a national level. These systems could help ensure the compatibility of equipment from various vendors that support utility owners and operators.

“Having demonstrated interoperability, we can now show the benefits of an extended range that covers a larger territory and simply gets further than would have been possible with a single system operating on its own,” Newell said.

During this year’s demonstration, the researchers placed their systems and a new system developed by Qubitekk, a QKD developer and manufacturer, in electrical substations in Chattanooga. These substations were connected by the piece of EPB’s fiber-optic network set aside for testing and served as pitstops that allowed each system to pass a key to the next system.

Severe distance limitations previously prevented QKD from becoming a viable addition to existing grid management techniques, but this test proved that three distinct systems can complete a real-world relay of quantum keys across the city.

“QKD is unique because it can detect the presence of any eavesdropper who attempts to intercept and copy information,” said ORNL QIS Quantum Communications Team Lead Phil Evans. “These interceptions show up as errors and we throw them away before they can leak any key information.”

In addition to extending the physical distance over which these systems can communicate, the trusted node approach also benefits utility providers by allowing additional substations to exist on the quantum network. As a result, the control center can communicate and securely issue critical instructions to all substations simultaneously.

“With this technology, utilities get better cybersecurity without introducing administrative headaches. It is a set-and-forget solution that simplifies cybersecurity operations for utilities,” said Duncan Earl, president and chief technology officer of Qubitekk.

Current smart grid communications leverage existing classical technologies, but adding private quantum networks would enhance cybersecurity and improve the durability of crucial resources. Although everyday devices such as smartphones and laptops generally require replacement every few years when the operating software is no longer supported, swapping substations or generators that often would be impractical and expensive.

“In principle, QKD systems integrated into the grid would stay secure for decades, matching or exceeding the service life of the physical infrastructure,” Peters said.

Although cybersecurity and longevity are important to QKD performance, better operating efficiency is also essential. For example, parts of the grid that support renewable energy sources such as solar power depend on the ever-changing position of the sun and clouds, and QKD could help distribute responsibility throughout other portions of the grid to compensate for fluctuating output while still reaping the rewards of green energy.

With one of the most advanced smart grids in the country, EPB has become a pioneer in grid research through longstanding partnerships and novel demonstrations that test quantum technology at unprecedented magnitude.

“We are proud of our partnership with DOE, ORNL and LANL and that EPB could host this quantum-based security field test for this simulation,” said Steve Morrison, EPB’s director of information security. “These smart grid demonstrations help us develop promising technology to help protect America’s electric grid from cyberattacks.”

“We’ve found them to be an excellent partner,” Evans said. “They have a very forward-looking mindset and have built a fantastic fiber-optic network that includes the isolated dark fiber test bed they have let us use for many experiments. We could not have gotten this far without the people at EPB.”

Bit by bit, the team hopes to deploy more QKD resources in the national grid system to see these same advancements on a much larger scale.

This research was supported by DOE’s Office of Cybersecurity, Energy Security, and Emergency Response. To date, the Office has developed and transitioned over 35 technologies to the energy sector by partnering with industry, cybersecurity vendors, academia, and National Laboratories. For more information, visit https://energy.gov/ceser.

UT-Battelle manages Oak Ridge National Laboratory for DOE’s Office of Science, the single largest supporter of basic research in the physical sciences in the United States. DOE’s Office of Science is working to address some of the most pressing challenges of our time. For more information, visit https://energy.gov/science.— Elizabeth Rosenthal