OREM Prepares Next Batch of Buildings for Demolition

OREM Prepares Next Batch of Buildings for Demolition 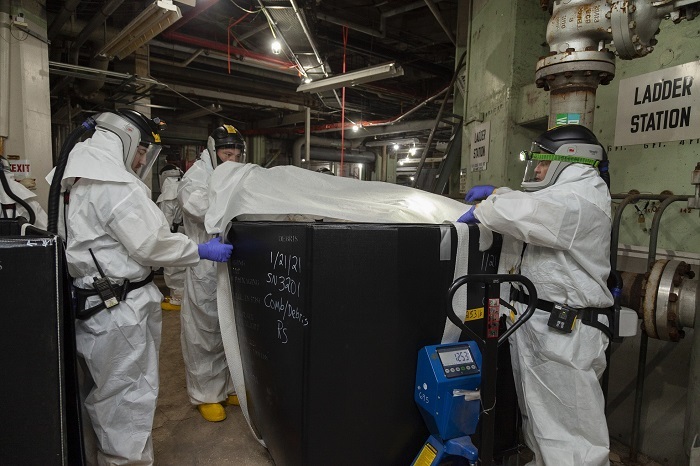 Workers remove waste from Alpha-2 as part of deactivation work at the Y-12 National Security Complex at Oak Ridge.

OREM is preparing the next wave of buildings for demolition at the Y-12 National Security Complex as part of a new chapter of cleanup in Oak Ridge.

Crews are deactivating three contaminated facilities at Y-12 after transitioning them to a “cold and dark” status in which all potential hazardous energy sources are isolated — a crucial step before full-scale deactivation.

Workers are addressing vacant 1940s-era buildings that do not support current-day Y-12 missions. EM and its contractor UCOR are focusing their efforts on Alpha-2, the Old Steam Plant, and the Old Criticality Experiment Laboratory. The latter is the only building of the three that was not built as part of the Manhattan Project.

UCOR is working simultaneously in all three buildings. Some team members isolated utilities and equipment while others performed early deactivation tasks such as abating asbestos and removing waste. Oak Ridge’s highly experienced workforce has made it possible to conduct all of this work in tandem.

“These crews were part of the team that completed the first-in-the-world removal of a gaseous diffusion complex last year, and they also completed demolition prep for the Biology Complex at Y-12,” UCOR Oak Ridge Reservation Environmental Cleanup Manager Dan Macias said. “The skills and training these workers bring to each project allow them to successfully complete our work safely and efficiently.”

More than 50% of the facilities throughout the National Nuclear Security Administration complex, which includes Y-12, are more than 40 years old, and 30% of them were built in the Manhattan Project age. EM’s work in Oak Ridge is beginning to remove this deteriorating infrastructure to enable modernization and provide land for national security missions.

Alpha-2, also known as Building 9201-2, is the largest building where deactivation is underway at the site. The three-story, 325,000-square-foot facility was constructed to enrich uranium using an electromagnetic separation process, which ended in 1946. The facility was used for a variety of other missions until it was shut down in the 1990s.

The Old Steam Plant, also known as Building 9401-1, is a single-story, 13,454-square-foot facility built in 1943. This building has had multiple uses over the years. In the 1960s and 1970s, it was used to develop a dipping process for uranium parts. Subsequently, the Oak Ridge National Laboratory (ORNL) used the facility to test fuels, and it later became a maintenance and storage facility.

The Old Criticality Experiment Laboratory, also known as Building 9213, was built in 1949. The two-story, 24,000-square-foot facility was home to more than 9,700 experiments from 1950 until 1961. It was later used to support ORNL’s High-Flux Isotope Reactor program. The building has been closed since 1992.

The massive cleanup at Y-12 is happening simultaneously with other cleanup projects underway at ORNL, where crews are addressing 16 inactive research reactor and isotope facilities.