Ernest Moniz reflects on withdrawal from the Paris Accord and his tenure at the helm of America’s energy R&D program. 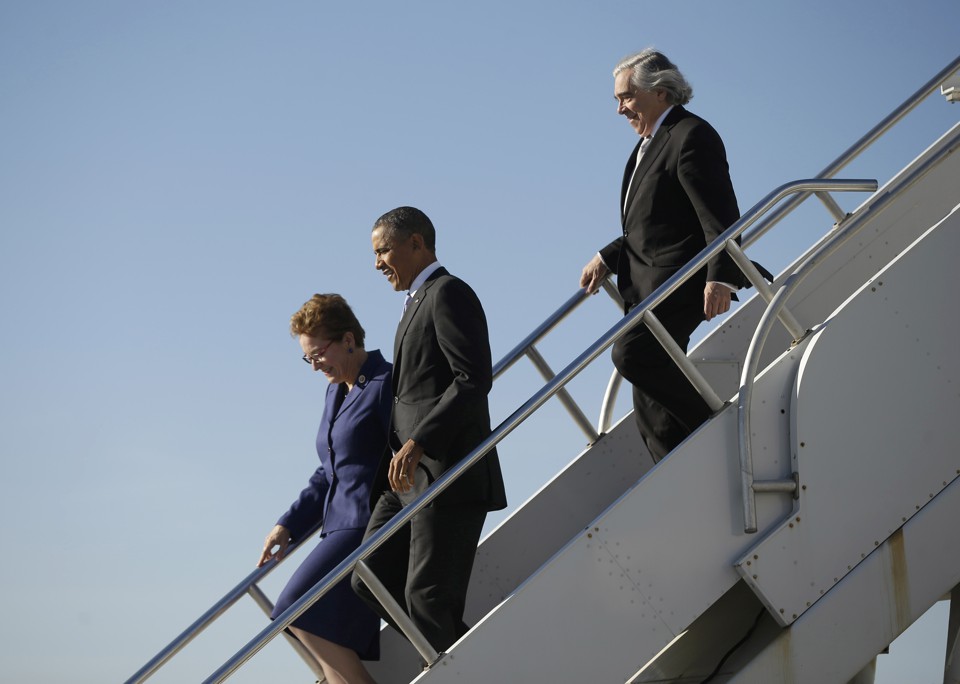 Barack Obama arrives at a Cleveland airport in 2013, accompanied by the former Energy Secretary Ernest Moniz and Congresswoman Marcy Kaptur

Ernest Moniz is the antithesis of Donald Trump. As the head of the Department of Energy throughout much of President Obama’s second term, he was responsible for championing the Paris Climate Accord, negotiating the Iran nuclear deal with former Secretary of State John Kerry, and diligently pursuing a broad-based energy strategy often called the “all of the above” option. He is as comfortable testifying before the Senate as he is leading rigorous research efforts into the future of energy systems. There are few theoretical physicists who seem to enjoy the grind-it-out politics of Congressional appropriations, but Moniz is one of them.

Perhaps it is not a surprise that Moniz’s accomplishments have come under attack by Trump’s administration. The biggest move was the president’s announcement that the United States would pull out of the Paris treaty, much to the dismay of the international community and American business leaders.

When I spoke to him recently, Moniz spelled out his legacy, as he sees it, and the various ways that the current administration is undermining the very programs that, as he put it, “have clear track records of tremendous success.”

For Moniz, that includes the Loan Programs Office, which made capital available for the deployment of energy technology. After—and despite—the well-publicized Solyndra debacle, that program has experienced few losses and generated substantial returns for taxpayers. Also on Trump’s chopping block are ARPA-E, a research program modeled on the famous Defense Advance Research Projects Agency, and a new structure Moniz created at the Department of Energy called the Energy Policy and Systems Analysis Office, which he says was designed to and received bipartisan support.

But you’d be hard-pressed to find anyone who understands the politics, policy, science, and technology of energy as well as Ernie Moniz, so the discussion covers a lot more: the growth of solar, government support for drilling technology, the continued sluggishness of innovation in nuclear power, and the current Department of Energy “review” of base-load power, which has renewable-energy advocates worried.

Perhaps most intriguingly, Moniz calls attention to the fact that the job losses in the coal industry have been primarily driven by technological change in fossil-fuel extraction, namely the development of fracking and other drilling technologies. That allowed for a massive ramp in the production of natural gas, which made it less expensive than coal. And he is founding a new organization that he calls The Roosevelt Project to try to address, on a community-scale, the dislocations that workers will face in a deeply decarbonized world, underpinned by new energy technologies.

A lightly edited and condensed transcript of our conversation follows.

Alexis Madrigal: How did you think about your overall remit at the DOE?

Ernest Moniz: I always looked at the overall portfolio of the department as addressing three different time scales. So, the loan program is addressing the decadal time scale. The idea was to provide relatively low-cost capital to get these technologies out there: go down the cost curve, go up the experience curve.

Then, you have something like ARPA-E, which addresses maybe the mid-term. These are still pre-commercial, taking a lot of risk, but something that could hit a few triples and a couple of home runs, a bunch of doubles, and in that 10 to 20 year time frame, hopefully we’re going to see a number of those technologies scaling.

A number of researchers have formed companies. There has been $1.8 billion in follow on private capital [funding those companies].

Then for the long-term, going to mid-century and beyond, when I think the industrialized countries, obviously including the United States, will need to be into a deep decarbonziation mode. The Paris targets are only a first step: 25, 27 percent in 10 to 15 years. We’re going to need 80 percent reductions, and that’s where much of the early-stage basic science comes in.

For example, at DOE, the Energy Frontier Research Centers. They’re fantastic. They’re run out of the Office of Science and they are addressing a whole suite of very fundamental challenges that could enable the big breakthrough technologies for the longer term.

“The Paris Accord is extremely important as a great first step towards significant decarbonization.”
So, it’s a portfolio and there is often a knee-jerk mantra that, “Oh, the government should only invest in the earliest stage science.” Well, okay, that’s a possible point of view. I don’t think it’s a point of view that’s going to get us to the kinds of solutions that we want and need and that’s going to give us the economic edge we need in a multi-trillion dollar marketplace.

Madrigal: You were tasked with executing on an “all of the above” energy research plan while you were the head of the DOE. Do you think you were able to support all of the energy technologies adequately? Or do you, looking back, feel any got the short stick?

Moniz: I think, overall, we did pretty well. Certainly efficiency, renewables. Fossil, we put quite a bit of money into the carbon capture. That was the focus of the administration. On the nuclear side, I would have liked to see a bit more, to be honest. We did some good things, but we could have done more.

I think a big area that still needs a lot more is on the system side, especially the electric grid, but also the integration of energy infrastructures—electricity and gas. Obviously now the cyber component has come up big. I think a lot more could have been done on resilience of energy infrastructure. We went in the right direction but not quite as fast as I would have liked.

Madrigal: What would you have liked to have seen done with nuclear power?

Moniz: I think there could have been a lot more done—though we were a little bit hamstrung—on the back end, on spent fuel-disposal approaches.  I would have liked to have seen more done on various small modular reactor concepts, for example.

Madrigal: If I compare my own expectations from five years ago, I would say I expected more reactor concepts and things to be farther along than they are. There seem to have been a lot of ideas that never got off the drawing board.

And a lot of people who are very interested in alternatives to light-water reactors feel they are boxed in because the regulatory process may not have the expertise it needs yet. And of course, that’s difficult for NRC [the Nuclear Regulatory Commission] to do because most of their funding comes from fees. And by definition, if you don’t have an industry of, say, fast reactors, well, where is the fee coming from?

I would have liked to have seen not only DOE but NRC to have more appropriated funding to allow for more alternative approaches.

Madrigal: Carbon capture and storage has encountered a lot of difficulty in scaling up and becoming a practical, usable part of the energy system. What’s the argument to keep spending research dollars there?

Moniz: We’ve seen the cost of lots of stuff coming way down—like wind—after deployment. Carbon capture is at a very early stage. After all, to a very good approximation, it’s always cheaper to release the CO2 than to capture it. In the absence of a carbon charge or a policy to cap CO2, it’s got to be government funding to move forward. Ironically, it is the carbon capture which I could argue is the only part of the energy R&D portfolio that really has only climate as its motivation, as opposed to other possible benefits.

I would also note that carbon capture is much less expensive for many industrial facilities. And if nothing else, this may be an important use of carbon capture and sequestration. Frankly, to be perfectly honest, in electricity production, we know we have multiple options with low carbon, CCS would be one option. In industry, we may be hard pressed to find alternatives to carbon capture for large facilities that produce large amounts of CO2. And often, the cost is much much less because in their chemical-process stream, they have to separate CO2 anyway. And a big cost in the power plant is the separation of the CO2.

Madrigal: Looking back over your tenure, what do you think your biggest accomplishments were?

Moniz: On the big scale, obviously, the role the department played in Paris and, most specifically, the Mission Innovation commitment in Paris, for countries to double R&D investments over 5 years. And then, of course, the Iran Deal, in a different space. Those were the major advances in the Obama administration.

Madrigal: What about things you were able to do inside the institution that maybe didn’t get as much attention as the climate accord and the Iran deal?

Moniz: There were a lot of other things that are very important for the department going forward. For example, I think the relationship with the 17 national laboratories of the Department of Energy and the way they became much more a part of the department’s strategic planning. I think that was important and I hope that will be built upon.

Another thing, if you go really inside baseball, there are some of the reorganizations we made were quite important and helped the department function more effectively.

Moniz: For example, I rearranged the responsibilities for the undersecretaries. There were three. What I think was very important was combining the science and energy portfolios in one secretary. The first undersecretary in that role, Franklin Orr, was a professor at Stanford.

Another one: The department always had some energy-policy function, but when I arrived, it was combined with the international affairs office. I never understood the logic of that. The policy got second shrift but it’s a core function for the department. So we split that off. But in splitting it off, it became named the Energy Policy and Systems Analysis Office. The “systems analysis” words were very important. That was the signal that this was going to be seriously analytical. And the hope was that in doing so, it would provide the foundation for a serious bipartisan response in Congress.

That played out dramatically.