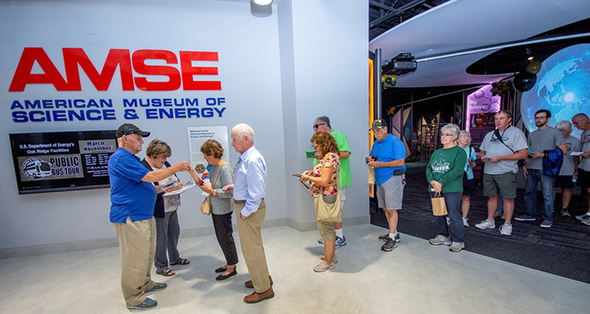 This week, DOE kicked off its annual Oak Ridge facilities bus tour, which has attracted more than 40,000 people from all 50 states since it began in 1996.

The tour, which continues through November, offers visitors a firsthand look at DOE’s facilities and historical commentary about Oak Ridge’s evolution over the past 75 years.

“This interactive program provides one of the most effective ways for us to show the scope of Oak Ridge’s cleanup mission and to help the public understand the progress we are achieving,” Oak Ridge Office of Environmental Management (OREM) Executive Officer Mike Koentop said.

The tour is staffed with unpaid guides who provide nearly 1,000 volunteer hours every year to run the program. In most cases, they are former employees who are excited to share a glimpse into Oak Ridge’s history, accomplishments, and ongoing work with visitors from around the nation.

The bus has multiple stops along its route that allow riders to see everything from pre-Manhattan Project structures to the world’s oldest nuclear reactor and cutting-edge research facilities.

The final portion of the tour runs through ETTP, which was formerly known as the Oak Ridge Gaseous Diffusion Plant. Visitors learn about the gaseous diffusion process that enriched uranium there for military and energy purposes from 1945 to 1985. They also see the footprint of Building K-25, which was the world’s largest building when it was constructed in the 1940s. OREM completed demolition of K-25 in 2013.

Each year as the bus travels through ETTP, onlookers witness how crews have continued transforming the site to achieve EM’s goal to complete major cleanup there by the end of 2020. With more than 400 structures demolished and nearly 1,300 acres transferred, ETTP is closer than ever to becoming an economic asset for the community as a private industrial park.

While many of the structures have been taken down, EM is also raising new ones to preserve the history at ETTP by commemorating the men and women who worked there and highlighting the technological advances they developed.