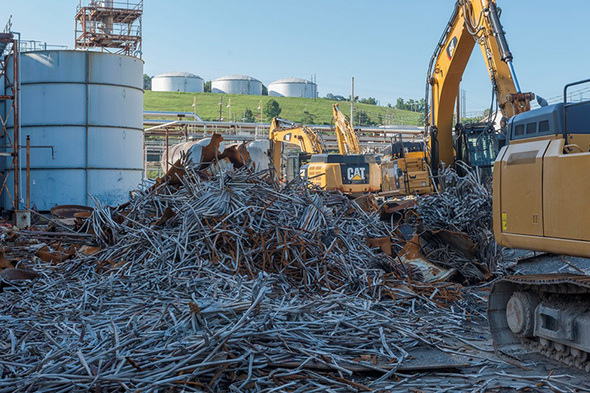 Machines take apart former tanks and more than 10,000 feet of piping before disposition at the Y-12 National Security Complex.

DOE’s Oak Ridge Office of Environmental Management (OREM) and cleanup contractor UCOR have completed demolition of the West Column Exchange (COLEX) equipment at the Y-12 National Security Complex (Y-12), reducing the threat of mercury releases into the environment, removing a significant structural risk, and clearing the way for future demolitions. Watch this video about the project.

“This project highlights our program’s value and impact to one of the nation’s most important national security sites,” OREM Manager Jay Mullis said. “Through this investment, we directly addressed mercury, our top priority at Y-12, and paved the way for future projects that will eliminate risks and open land for future missions.”

The mercury-contaminated COLEX equipment was connected to the four-story 500,000-square-foot Alpha-4 building, which was used for uranium separation from 1944 to 1945. Workers finished installing the COLEX equipment in 1955 for lithium separation, a process requiring large amounts of mercury. A significant amount of mercury was lost into the equipment, buildings, and surrounding soils, and its cleanup is one of EM’s top priorities.

During the 18-month project, crews recovered nearly 6,500 pounds of mercury from the rusted and structurally degraded equipment. The teams also completed asbestos abatement; drained and removed more than 10,000 feet of mercury-contaminated piping; and removed tanks, condensers, heat exchangers, and a 1.6-million-pound mezzanine structure.

The project posed several unique challenges. The cleanup was conducted in a high-security protected area on a National Nuclear Security Administration footprint, requiring frequent integration with Y-12 personnel. The elemental mercury also introduced a new worker hazard that had not been encountered during major cleanup operations at other Oak Ridge cleanup sites.

“Our crews were accustomed to addressing the uranium process hazards found at the East Tennessee Technology Park,” said Daniel Beckworth, UCOR’s Y-12 cleanup enterprise program manager. “At COLEX, much of our planning focused on preparing the workforce for the hazards presented by mercury.”

The COLEX demolition project was part of DOE’s Excess Contaminated Facilities Initiative, which is intended to eliminate risks in non-operational facilities with no future mission. These projects improve worker safety and reduce the cost and complexity of future cleanup by removing risks and helping prevent further migration of contaminants.

“I am proud of this team — how they faced and overcame the new challenges associated with mercury cleanup,” Beckworth said. “The experience gave us a sound understanding of what lies ahead with other mercury-contaminated facilities that we will face in the future.”