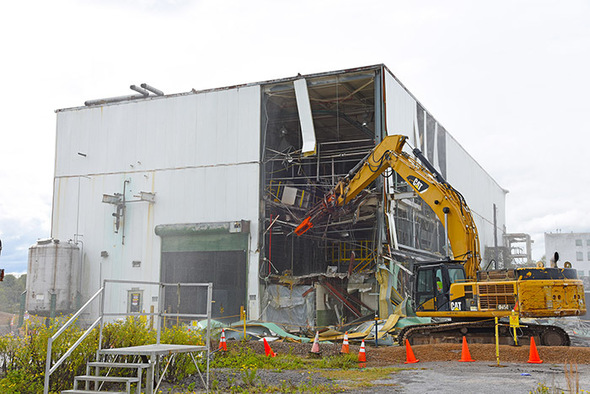 Crews began the teardown in early October by bringing down a 74-foot-tall silo that was part of the facility. The silo, made of stainless steel, was shipped for recycling. Demolition of the main structure then commenced and was completed Nov. 20. Workers are now removing the structure’s slab.

The 8,400-square-foot, two-story facility was built in the early 1970s to recover chemicals resulting from site activities. The building’s original recovery operations were shut down in 1982, and the facility was then used to treat wastewater from the Y-12 National Security Complex during the 1980s and early 1990s.

The building was located in the Poplar Creek area of ETTP, which once housed several facilities that supported the site’s gaseous diffusion uranium enrichment operations.

One by one, the Poplar Creek area facilities have been coming down as OREM moves closer to its goal of cleaning up ETTP and converting it into a private-sector industrial park, national park, and conservation area. Removal of K-1232, along with several other structures in the Poplar Creek area and across the site, opens more land for economic development.

“We are closing in on completing all demolition in the Poplar Creek area of ETTP,” OREM ETTP Portfolio Federal Project Director Karen Deacon said. “This area once housed some of the most contaminated facilities at ETTP, and their removal makes the area safer and promotes industrial development as ETTP transforms to a private-sector industrial park.”

OREM and UCOR are working to complete major cleanup at ETTP in 2020. That vision is being realized, as OREM has already demolished more than 400 buildings and transferred almost 1,300 acres from government ownership.