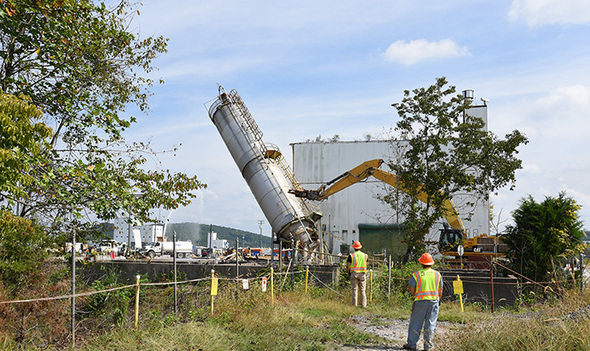 Crews began demolishing Building K-1232 by knocking down a 74-foot silo that was part of the structure.

DOE’s Oak Ridge Office of Environmental Management (OREM) and its cleanup contractor URS | CH2M Oak Ridge (UCOR) have demolished five buildings in the Poplar Creek area of the East Tennessee Technology Park (ETTP) since last year, and one more will soon be added to that list: the K-1232 Chemical Recovery Facility.

Crews began demolishing K-1232 on Oct. 3, and the project is expected to be complete in a month.

This work is advancing OREM and UCOR toward Vision 2020 — the goal to complete all demolitions at ETTP in 2020. So far, OREM has torn down more than 400 facilities and transferred more than 1,000 acres to the community for economic reuse and development.

The Poplar Creek area contains the most contaminated buildings remaining at ETTP. Before demolitions began last year, the area housed several facilities —some dating to the 1940s and ’50s — that supported the site’s former nuclear program and operations.

One by one, OREM and UCOR have removed old, dilapidated, and contaminated buildings to enhance safety and clear land to achieve EM’s goal of converting ETTP into a private sector industrial park, national park, and conservation area.

Teardown activities began in an impressive fashion with crews bringing down a 74-foot-tall silo that was part of K-1232. Made of stainless steel, the silo will be shipped for recycling.

The 140-foot-by-60-foot, two-story K-1232 facility was built in the early 1970s to recover chemicals resulting from site operations. Those activities ceased in 1982, and the facility was later used to treat wastewater from the Y-12 National Security Complex until the early 1990s.

“The K-1232 demolition continues a string of large Poplar Creek facilities that have been removed, moving us closer to our ultimate cleanup and reindustrialization goals for the site,” Acting ETTP Portfolio Federal Project Director Karen Deacon said.