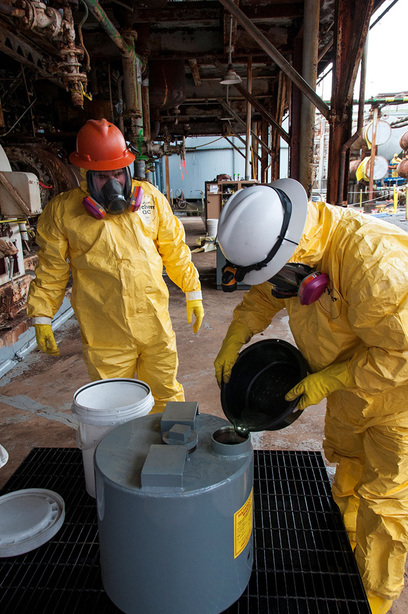 Workers pour mercury from COLEX equipment into a container designed to hold 1,000 pounds of the element

Workers are inspecting and cleaning the pipes and column exchange (COLEX) equipment on the west side of Alpha-4. They have tapped and drained approximately 2,100 feet of the 5,700 feet of piping so far, retrieving large amounts of mercury, and more is expected as work continues. EM will address and remove the remaining portions on the facility’s east and south sides in the future.

“This project has proven to be a very successful investment for our program,” said Oak Ridge Office of EM Acting Manager Jay Mullis. “We set out to remove risks and enhance safety through the Excess Contaminated Facilities initiative, and our efforts at Alpha-4 will prevent thousands of pounds of mercury from leaking into the environment.”

The mercury-contaminated COLEX equipment is connected to the four-story 500,000-square-foot Alpha-4. The building was used for uranium separation from 1944 to 1945. Workers finished installing the COLEX equipment in 1955 for lithium separation, a process that required large amounts of mercury. A significant amount of the element was lost into the equipment, buildings, and surrounding soils, and its cleanup is one of EM’s top priorities. 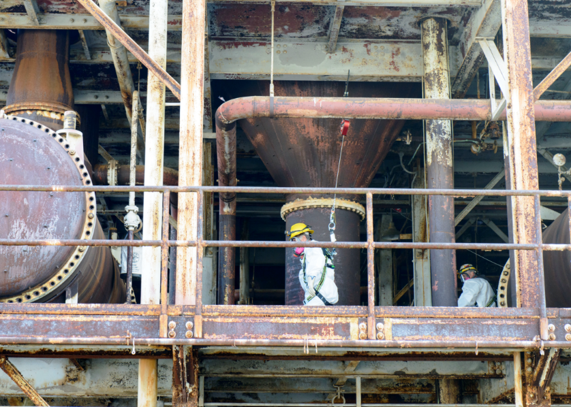 Workers have already dismantled approximately 1,100 feet of the drained piping. Demolition of the equipment begins this month and is expected to be complete later this year, removing approximately 3,300 cubic yards of equipment.