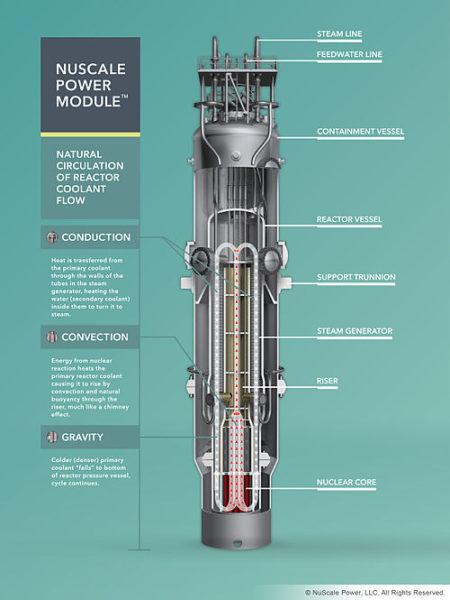 NuScale Power is a step closer to seeing its nuclear reactor built in eastern Idaho. Having completed a 12,000-page design application for the federal regulator the Nuclear Regulatory Commission the firm expects to deliver the document describing the first-of-its-kind small modular reactor design tomorrow, Thursday, in Washington, D.C.

Nuscale Power is the first of several companies researching small modular reactors, but no one has made it this far in the expensive planning, testing and application process. Company officials plan a formal announcement of the milestone later Thursday in the capital. Lynn Orr, undersecretary for science and energy, is scheduled to speak.

Mike McGough, NuScale’s chief commercial officer said finishing the document is the biggest accomplishment for the company since winning $217 million in matching funds from the Department of Energy in 2013 to accelerate the reactor’s development. Under the agreement with the DOE, NuScale was to finalize the design application and submit it to the NRC by late 2016.

The Oregon-based company finished the document just in time by holding a last-minute afternoon meeting Dec. 31 and signing it just before midnight, McGough explained. The NRC application review process is expected to take more than three years and cost NuScale $45 million.

These kinds of documentation cost tens of millions of dollars to produce and requires paying NRC officials $258 per hour to review and provide feedback at various stages of completion, McGough explained. NuScale took out an NRC “project number” – indicating it wanted to move forward with the regulatory design certification process – in 2008. Some 800 people from NuScale and its partners pitched in along the way.

Advanced modular nuclear reactors could restart the atomic age by providing cheap, meltdown-proof and waste-free nuclear power. These reactors were originally developed at the Department of Energy’s Oak Ridge National Laboratory, but were abandoned because they couldn’t be used by the military.

Small modular reactors could be a massive power generation market contributor. These reactor designs have the potential to be much cheaper than conventional reactors because they would be completely manufactured in a factory. This reactor format would also require far less up-front investment, making them cost competitive with natural gas. The smaller size fills the need for enhanced distributed power installations making them useful for base load power in dense power demand areas as well as more capable of powering remote areas.

The aforementioned enormous regulatory expense combined with polices intended to support wind and solar power make it incredibly difficult to profitably operate a nuclear power plant, according to a study published in October by the free-market R Street Institute.

One hopes that the advanced modular reactors will short circuit these regulations, getting very low cost power onto the market. More better cheaper for electrical power is far more important to the national economy than any other input.