Nuclear Weapons Mess: We’re All in it Together but Don’t Know How to Get Out Alive

Nuclear Weapons Mess: We’re All in it Together but Don’t Know How to Get Out Alive 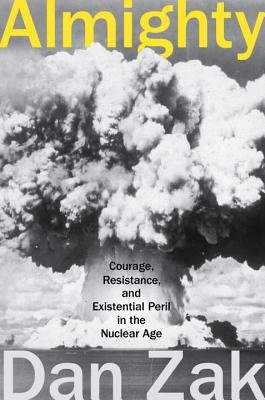 Richard Rhodes is the author of “The Making of the Atomic Bomb” and three other volumes of nuclear history. He wrote this article for the Opinions section of The Washington Post reviewing Washington Post journalist Dan Zak’s book “Almighty”.

Shortly after 4 a.m. on July 28, 2012, an 82-year-old Catholic nun, a Vietnam veteran and a housepainter cut holes in several security fences surrounding a government facility in Oak Ridge, Tenn., where thousands of nuclear bomb cores are stored, walked up to the massive white concrete-and-steel building and splashed its walls with blood. They spray-painted slogans. They hammered concrete chips off the base of a manned guard tower. No one shot them. Six minutes passed before a security van even arrived to investigate.

The story of this shocking peaceful invasion of Oak Ridge, and what followed, anchors Washington Post journalist Dan Zak’s “Almighty,” but the book examines at eloquent length the current state of nuclear security and diplomacy, as well. As Zak finds, these appear to be at least as complacent and contradictory as did Oak Ridge security when the nun and her two fellow protesters challenged it in 2012.

You can make a nuclear explosion yielding at least the equivalent of hundreds of tons of TNT simply by dropping one subcritical piece of a bomb core onto another by hand. For that reason, bomb-core storage facilities depend on perimeter defense — on keeping the bad guys out of the building. Sister Megan Rice and her two accomplices had no intention of trying to breach the storage building’s formidable defenses — it is, so its guardians claim, one of the most secure buildings in the world — but the fact that they were able to stand next to it and fling baby bottles full of blood onto its walls indicates that its very physical security had made its guards complacent. They simply couldn’t imagine anyone getting past perimeter security; they actually reset their alarms after the three protesters set them off, assuming that an animal had tripped them.

If a flying squad of suicide commandos had blown its way into that building, Oak Ridge today would be a large hole in the ground and eastern Tennessee a radioactive wasteland. Sister Megan made her point, as Rep. Joe Barton told her when she testified later in Washington. In return, from a reluctant judge, she got 2 1/2 years in prison.

Oak Ridge is one node of an extensive and expensive national complex of nuclear weapons deployment, storage, refurbishment and dismantling. Zak quotes a U.S. official calling it “a zoo of extremely wild animals.” The U.S. nuclear arsenal, Zak notes, has been reduced by 85 percent since its numerical high point in 1967, yet our “21st-century budget for nuclear weapons is higher than the budget at any point in history.” (This seeming contradiction reminds me of the British naval historian C. Northcote Parkinson’s 1955 observation that, because work expands to fill the time allowed, the number of British admiralty officials had increased by more than 78 percent during a time period — 1914 to 1928 — when the British navy had decreased by a third in men and two-thirds in ships. President Obama’s recent call to spend nearly $1 trillion to refurbish and upgrade the U.S. nuclear arsenal across the next decade continues the trend.)

Zak reports not only on the lives of the three Oak Ridge protesters but also on the impact of nuclear weapons testing over the years on the people of the Marshall Islands, where the largest U.S. bombs were tested, and the downwinders of the American Southwest below the continental test site at Yucca Flats, Nev., who believe that their cancers and other serious illnesses resulted from exposure to nuclear fallout. He looks into the lives of the people who live in the city of Oak Ridge and work at the bomb facility in their midst.

He follows the trial of the three protesters from the point of view of the uncomfortable government lawyers who led the prosecution. He profiles Rose Gottemoeller, Obama’s leading U.S. nuclear diplomat, as she tries to untie the nuclear knot incrementally while more than 100 other nations sign an Austrian-initiated humanitarian pledge that commits them to work “to stigmatize, prohibit and eliminate nuclear weapons in light of their unacceptable humanitarian consequences and associated risks.”

Zak doesn’t spare what he calls the “nuclear priesthood,” the weapons-makers and suppliers, finding them meeting in Washington during the same 2015 summer when Sister Megan was released from prison. Lockheed Martin, General Dynamics and Northrop Grumman sponsored their annual nuclear-triad conference. On that occasion, Rep. Mike Rogers of Alabama referred to Obama’s speech in Prague in 2009 on eliminating nuclear weapons, claiming happily, “I think we can safely say the president’s Prague vision is dead,” and a guest speaker warned of a “relatively new threat to our deterrent” — the same humanitarian movement that is promoting Austria’s pledge.

To Zak’s credit, he reports as well the opinion of that guest speaker, a former Navy officer named Frank Miller, that nuclear weapons have prevented large-scale war since 1945, that the “humanitarians . . . have no role in assuring global stability or halting aggression,” that “their crusade could create conditions for war, and for massive bloodshed.”

Nor is Zak prepared to choose sides, though his heart is clearly with the nun and the humanitarians. In the end, Sister Megan returns to Oak Ridge, where a new security company has replaced the old one, to hang a paper crane from the somewhat better-guarded fences. The guards would collect it and throw it away in half an hour, he tells us, “but right then . . . it was all she could do.” Having surrendered our authority as citizens to what the scholar Elaine Scarry rightly calls a “nuclear monarchy,” with the president, like a king, solely in charge of initiating world-destroying nuclear war, it’s all any of us can do.

I wish Zak had checked his physics more carefully; his descriptions of how nuclear weapons work are badly garbled. He seems as well to credit the revisionist view that the Japanese leadership in the final days of World War II was ready to surrender, no atomic bombs required — a view that both Japanese and American scholars have convincingly discredited.

These minor errors hardly weaken the authority of Zak’s report on where we are and how we got here. The most important single idea in “Almighty” emerges in the assertion of an exasperated South African ambassador to the United Nations, Abdul Samad Minty: “If for security reasons the [five original nuclear powers] feel that they must be armed with nuclear weapons, what about other countries in similar situations? Do we think that the global situation is such that no other country would ever aspire to nuclear weapons . . . when the five tell us that it is absolutely correct to possess nuclear weapons for their security?”

Like it or not, this question of fundamental equity among nations is the paradox and the core of the nuclear dilemma. The report of the Canberra Commission on the Elimination of Nuclear Weapons stated it even more succinctly in 1996, calling it the Axiom of Nuclear Proliferation: “As long as any state has nuclear weapons, others will seek to acquire them.” And Obama in Prague added a surely true but terrifying corollary: “If we believe that the spread of nuclear weapons is inevitable, then in some way we are admitting to ourselves that the use of nuclear weapons is inevitable.”

With nuns splashing blood, countries making pledges, diplomats working to reduce the size of world-destroying arsenals, suppliers cheering a new Cold War, Zak demonstrates that we’re all in it together. And he’s honest enough to report as well the hard truth that none of us yet knows how to get out of it alive.