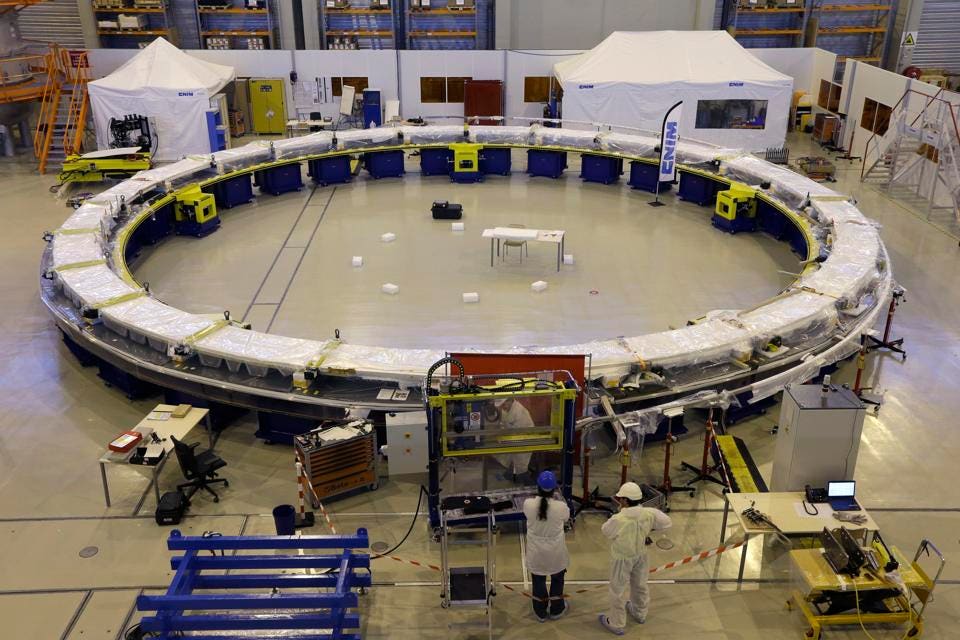 The winding facility of the ITER ( the International Thermonuclear Experimental

Private investors are now actively trying to commercialize an advanced form of nuclear energy and one that would leave no environmental footprint while also delivering electricity to the world’s expanding population. At issue is nuclear fusion, which has been an elusive concept for six decades but which one firm hopes to makes real by 2025.

TAE Technologies, which has backing from a founder of Microsoft Corp. and which uses Google’s algorithms to better mold plasma that is at the core of the fusion technology, says that the concept can be mastered. Basically, the goal is to fuse atoms together, which requires intense heat levels. If it could be commercialized, the result would produce10 million times more power than a conventional power plant — without CO2 emissions and without radioactive materials.

“The entire game is to learn how to control the plasma,” Michl Binderbauer, president and chief technology officer for Foothill Ranch, Calif.-based TAE Technologies, in an interview with this writer. “Fusion requires holding this together for long enough at hot enough temperatures. Particles then start to bang at each other. When it is sufficiently hot, the atomic cores collide and fuse together.”

To be clear, fusion is different from fission, which is how today’s nuclear reactors produce energy. Fission splits atoms apart whereas fusion combines them – a process that thus far consumes more energy than it generates. The aim, though, is to heat the hydrogen gas to more than 100 million degrees Celsius so that the atoms will bond instead of bounce off each another.

The time is definitely ripe for a technological leap in nuclear fusion. Electricity consumption could double by 2050, led in large part by the industrialization of the developing world. Wind and solar energies are gaining increasing market share but that growth may not be enough to erode the ill-effects of a warming climate.

What makes TAE’s work so interesting is that it has largely been a private enterprise from the get-go. There are wealthy individuals as well as large institutional investors and sovereign wealth funds financing it. Meantime, Lockheed Martin’s Skunk Works fusion program is another privately-held venture. Its project is smaller but the company says that it is able to handle temperatures of hundreds of millions degrees that can be released in a control fashion.

The most well known is ITER, or the International Nuclear Fusion Project: It is a partnership among the Europe Union’s member states, the United States, Russia, China, India and South Korea to get a fusion demonstration project up -and-running in France. At least $20 billion has gone into that research and development – and far more will be required. Additional publicly-financed research is being done by the Oak Ridge National Laboratory, which is trying to figure out how to keep reactor temperatures low while nuclear reactions occur in hot plasma.

“We can move a lot of quicker,” Binderbauer says of TAE Technologies’ venture. “The others would have a very different solution. From a science perspective, there are huge differences. But the markets will bear this out. There is room for multiple players.”

Even Binderbauer says that trying to tackle the technology has huge financial risks. The central question, though, is whether the process can ever yield enough heat to fuse permanently those atoms that are needed to commercialize such power.