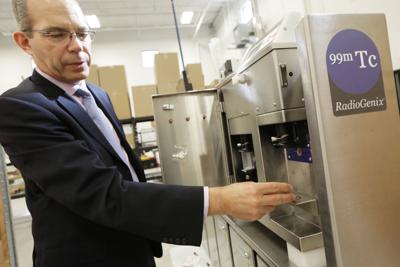 On the east side of Beloit, just off I-90/39, NorthStar Medical Radioisotopes is just weeks away from becoming the first U.S. company in 30 years to provide a scarce but critical form of a trace element used in millions of medical tests every year.

The former Madison company crossed its final hurdle earlier this year to manufacture technology to produce molybdenum-99 — a crucial substance that decays into technetium-99m, a radioactive isotope used in diagnostic procedures such as heart stress tests and cancer scans.

Meanwhile, NorthStar’s sister company, NorthStar Nuclear Therapies, is pushing ahead with plans to produce other radioisotopes, such as actinium-225, for use in treating certain cancers and HIV.

“It’s pretty exciting. It’s a very important opportunity that we have,” said Stephen Merrick, recently promoted to president and CEO of parent company NorthStar Medical Technologies as well as the Radioisotopes subsidiary.

NorthStar has amassed more than $60 million so far — half of that from the U.S. Department of Energy’s National Nuclear Security Administration which has matched private funds. One of NorthStar’s main private investors is Hendricks Holding Company, set up by Ken and Diane Hendricks, founders of ABC Supply Co., the huge roofing supply company based in Beloit.

In recent years, molybdenum-99, also known as moly-99, has been produced from highly enriched uranium in a handful of aging nuclear reactors around the world, reactors that commonly close for unplanned outages, straining supplies of the substance and in some cases, forcing the delay of patient treatments.

“In the industry at this moment, our customers have two suppliers. Every week this year, one of the suppliers has failed to come through,” Merrick said.

Don Yoo, associate professor of diagnostic imaging at Brown University’s medical school, said a Canadian reactor that was a significant moly-99 provider for the U.S. stopped producing it last spring. He said the nuclear medicine community has been waiting for a new supplier.

Establishing U.S. producers of molybdenum-99 — without using highly enriched uranium — has been a U.S. Department of Energy goal for nearly a decade. NorthStar is one of the few companies that took up the challenge and is in line to be the first to accomplish that goal.

The U.S. Food and Drug Administration approved NorthStar’s RadioGenix system as an acceptable source for technetium-99m in February, and followed in July with a green light to assemble RadioGenix at NorthStar’s Beloit plant.

“Everyone in the U.S. has been pretty excited about it,” said Yoo, who is on the board of chancellors for the American College of Radiology. “I think the way they’re producing moly-99, using a non-uranium-based method, seems very interesting to me.”

How the system works

NorthStar does not make molybdenum-99 in Wisconsin. It is made at the University of Missouri Research Reactor (MURR), in Columbia, Missouri, where NorthStar has its own employees who work with MURR staff. “They’re a very important partner,” Merrick said.

Moly-98, a stable, non-radioactive isotope, picks up an additional neutron from the reactor, turning it into moly-99.

The moly-99 is dissolved in a solution and poured into tungsten-lined containers, called source vessels, and shipped to customers from MURR.