My Grandfather Thought He Solved a Cosmic Mystery

My Grandfather Thought He Solved a Cosmic Mystery

His career as an eminent physicist was derailed by an obsession. Was he a genius or a crackpot? 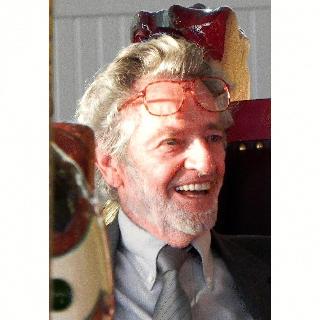 When my grandfather died last fall, it fell to my sisters and me to sort through the books and papers in his home in East Tennessee. My grandfather was a nuclear physicist, my grandmother a mathematician, and among their novels and magazines were reams of scientific publications. In the wood-paneled study, we passed around great sheaves of papers for sorting, filling the air with dust.

My youngest sister put a pile of yellowing papers in front of me, and I started to leaf through the typewritten letters and scholarly articles. Then my eyes fell on the words fundamental breakthrough, spectacular, and revolutionary. Letters from some of the biggest names in physics fell out of the folders, in correspondence going back to 1979.

In this stack, I found, was evidence of a mystery. My grandfather had a theory, one that he believed to be among the most important work of his career. And it had never been published.

My grandparents had arrived in the low green hills of East Tennessee with their young daughter, my mother, in 1960. The town of Oak Ridge had been rebuilt from the ground up for military research, like Los Alamos, New Mexico, and Hanford, Washington. Together these secret cities became key sites in the Manhattan Project, the push to develop the first atomic bomb. But by the time Francis and Claire Perey came to town, peace had turned the facility into the Oak Ridge National Laboratory. There they rammed neutrons into the centers of atoms for a living.

In the 1960s and ’70s, they published paper after paper describing the probabilities of various outcomes of their collision experiments—how often a neutron would veer left or right or another direction, how often the atom would emit another particle, and other possibilities. These seem to have been happy years: Their son was born, and their work was well received, cited many times by other scientists.

When I knew them, Francis and Claire were no longer at the lab; during my childhood, my mother would invite them for a month-long visit at Christmastime. Francis was a man of consuming obsessions. One year in the mid-’90s, it was a card game whose simple rules hid deep mathematical truths; another, it was a demonstration, using a chair-back and a length of cord, of the strangeness of quantum mechanics. He had eyebrows like wiry caterpillars, and a constant look of delayed revelation. He wore a single, boldly checked blazer for nearly every occasion, and he often went around with two pairs of glasses balanced on his forehead—one for close reading, one for distance—and his mouth slightly ajar. My dad used to say, half-wonderingly, half-jokingly: “He’s about to utter a theory of everything.”

Indeed, as a child, I’d heard murmurings among the adults that Francis had an idea of some sort. I had never understood what it was, and looking through these papers, I still could not make sense of it. The theory seemed to deal with the fundamental question of where probabilities come from, as well as a specialized subfield of mathematics and even quantum mechanics. To understand my grandfather’s grand obsession, I had to go into the foundations of physics, and to the heart of the stories we tell about science. What was Francis on to?

Click here to read the rest of the article.