Member Spotlight: Sometimes a Loss can be a Victory

Member Spotlight: Sometimes a Loss can be a Victory 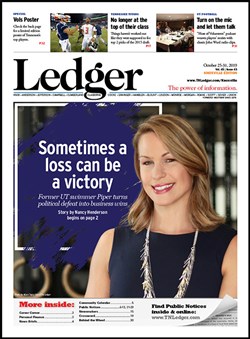 It was during her run for a seat on the Knox County Commission in 2008 that Cortney Piper realized she might be cut out to run her own business.

“That’s when the entrepreneurial bug sort of bit me,” says Piper, 39, whose company provides public relations and strategic communications consulting with a focus on clean energy and technology. “I was running my own campaign and creating something myself and I really, really enjoyed that process. I enjoyed meeting people and talking to them and trying to tailor a platform that I thought was going to respond to my constituents’ needs.”

Piper lost her bid for office but launched Piper Communications that year, in the middle of the recession. She now employs seven full- and part-time staff members in her SBA-certified Women-Owned Small Business and serves clients ranging from the University of Tennessee and Oak Ridge National Laboratory to private-sector general contractors and solar installers.

Growing up in Gross Pointe Woods, Michigan, near Detroit, Piper was obsessed with swimming.

“My mom was a swimmer, so some of my earliest memories are being at the pool, whether it was swim lessons at the YMCA in the winter in an indoor pool or our swim team practices outside in the summer at our city park.”

When the scholarship offers began arriving in her junior year of high school, she deliberately considered only those far away from the “northern frozen winters.”

Some of the most competitive colleges were in the Southeast anyway, so she took five recruiting trips to Clemson, North Carolina-Chapel Hill, Texas A&M, University of Missouri and UT, the last stop on her must-visit list. There was another reason, too, for gravitating across the Mason-Dixon Line.

“I decided very early on in high school, when I knew I wanted to swim in college, that I would rather be a small fish in a big pond than a big fish in a small pond. So that’s why I specifically chose colleges in the South.”

She picked UT, where she studied political science and environmental sociology with the goal of going to law school. Slowly, she discovered she was “just horrible” at taking standardized tests, so she felt compelled to follow a different career path.

She decided to put her dual degrees to good use at a nonprofit organization, or perhaps a city, state or federal government.

After graduating with honors in 2003, Piper was selected to participate in the Green Corps, an environmental advocacy training group based in New England, where she assisted communities fighting backyard battles against challenges like hazardous waste, landfills and pesticide spraying with adverse health effects.

But the Northeastern winters were cold.

“My blood had thinned faster than I realized,” she explains. “So I thought, ‘You know what? I can be that person that lives in my parents’ basement until I’m 40 or I can move back to Knoxville and try and make my own way.’ So that’s what I decided to do.”

On the heels of her unsuccessful county commission bid in 2008, she helped orchestrate another political campaign before trying to restart the conversations she’d previously sparked with a handful of local PR agencies. But each time she approached one, she got the same response: “Well, we’re headed into a recession and we don’t think we’re going to be hiring anyone new anytime soon.”

Her boyfriend (and now husband) Barry Armstrong suggested she freelance until the economy picked up again. But by the end of 2008, Piper was itching to take a bigger leap, recession or not. “I said, ‘I’m going all in. This is going to be a business.’”

Given her academic and nonprofit background, the energy-technology niche came naturally, Piper says. One of the first things she did was reach out to the people she knew at ORNL. “[I asked if] I could just literally sit in the corner and listen,” Piper recalls.

Among her ORNL mentors was Tom Ballard, who was director of partnerships there when the two met in 2010. Now chief alliance officer at PYA, a professional services firm specializing in health care consulting and certified public accounting, he was impressed by Piper’s professionalism and preparatory skills.

“Cortney is a quick study, has a keen intellect, engages with people very well, and does not fear tackling opportunities that others might shun,” Ballard points out. “She is equally comfortable and can clearly articulate her thinking in either soundbites or more extended explanations.”

Despite its seemingly untimely launch during an economic slump, Piper’s company quickly took off. She credits the growth to a combination of two things: a never-give-up mentality and a subject matter expertise that capitalized on a need.

“I’m a Division 1 college athlete, so I work very, very hard to be successful,” she says. “I always had my head down. I wasn’t afraid to do anything that was asked of me, and do it well, and get it done yesterday. So I do have that tremendous work ethic from being a college athlete.”

In addition, at the time she started her business, members of Congress were considering new climate and energy policies, which led her to opportunities to work with ad hoc coalitions in 15 states that were starting initiatives to influence the discussion.

Piper admits she is “picky” about taking on new clients. “Our goal is to get them results, period,” she adds. “I want every initiative and every client and every project we’re working with to have some sort of positive impact on our community, whether you want to define that as city, region, state or country.”

Raising tripletts might be enough of a workout for some, but Piper still likes to hit the gym three mornings a week.

She and her team offer a gamut of services, including photography and graphic design; writing for press releases, guest columns, talking points, speeches and other projects; and coalition-building and government relations. For the Tennessee Advanced Energy Business Council, the firm works with the Baker Center at UT to create reports for media, stakeholders and officials. Partnering with the Innov865 Alliance, a group that promotes entrepreneurship throughout East Tennessee, Piper Communications provides organizational management, event logistics and public relations support.

Her strengths as a business owner, she says, are a strong work ethic and a knack for strategizing. “It can be really easy to get sidetracked or overwhelmed if you don’t stay laser-focused,” she says. “Also, because I had that really great experience of being able to absorb a lot of technical information about energy and technology, I can often see the forest through the trees. I think that also comes a little bit too from working on political campaigns, immediately being able to recognize the ‘so what’ of a client story or a project or initiative in order to get them either more support or more business. It’s a very valuable skillset, being able to tell those stories.”

She has also volunteered her time to a number of community initiatives. Currently, she serves on the Visit Knoxville board of directors and the executive committee of the East Tennessee Economic Council, and chairs UT’s political science department advisory board. In 2014, she received the ETEC Postma Young Professional Medal for making a positive impact on the region.

Piper also tapes a local television show, “Tennessee This Week,” for ABC affiliate WATE, a side gig she accepted in 2008, when after her run for public office, evening anchor Gene Patterson expressed admiration for her on-camera professionalism.

“He said, ‘You know, we could really benefit from a different perspective on that show, and you being a Democrat, young and female, we think you would be a nice complement to our regular pundit.’ And I said, ‘Sure. Why not?’”

At first, Piper appeared on the show occasionally but, after two years, became a regular. She and her fellow hosts discuss local, state and federal politics and current events as they relate to the Knoxville community.

When asked about her own political aspirations, Piper responds, “I don’t have any plans to run again in the immediate future, but it’s definitely on my radar.”

A few years ago, she swapped her swimming regimen for gym workouts at CrossFit in South Knoxville. “That’s how I start my morning three days a week, and I absolutely love it,” she says. “I love the challenge. It reminds me of swimming in college, just the atmosphere with coaches and that team environment early in the morning.”

When she and her spouse were newlyweds, they took it upon themselves to get all the feral cats in their Holston Hills neighborhood spayed or neutered. “I am pleased to say that we haven’t seen any new cats or kittens for at least six years now,” Piper says. Well, the couple did adopt one, whom they named Freda, and brought her inside.

These days, there’s not much room at the Piper household for more pets. She and her hubby have 2-year-old triplets – two girls and a boy. “It’s been one of the most challenging and rewarding parts of my life to date,” she says. “I just can’t imagine life without them.

“My husband and I have a lot of help,” Piper adds. “You can’t do this alone. We have family in town. We found a really wonderful day care for them. It takes a village.”

That support allows her to keep focusing on the business she’s worked so hard to build. “I enjoy solving problems for clients,” says Piper, who also relishes the learning aspect of her job.

“I love putting the puzzle pieces together, and I love having an impact in the community where I live and beyond. I love being able to contribute something positive and valuable to our city, to our state and to our country.”