A collaborative agreement being overseen by the U.S. Department of Energy involves a deceptively simple test — a test that could radically increase the throughput of the United States’ existing base of CNC machine tools. 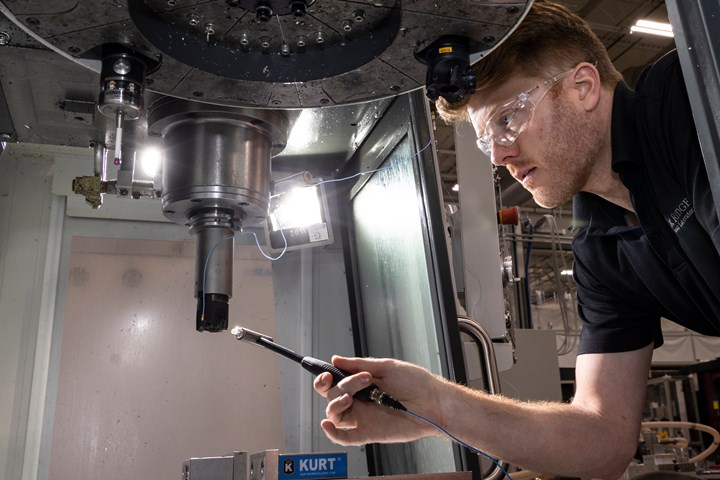 A collaborative agreement being overseen by the U.S. Department of Energy involves a deceptively simple test that can determine, based on the material and the depth of cut, which machining speeds are going to be stable and which speeds are not. All photos courtesy of Oak Ridge National Laboratory.

In September of 2018, a 146-page report issued by the Department of Defense landed on President Trump’s desk, presumably with a thud. The report was a result of Executive Order 13806, issued by the President during the summer of 2017 — a period that coincided with heightened tensions between the United States and North Korea. The report’s title was self-evident: “Assessing and Strengthening the Manufacturing and Defense Industrial Base and Supply Chain Resiliency of the United States.” But its findings were, in a word, bleak.

Recognizing a critical threat to economic and national security posed by manufacturing labor shortages, production outsourcing, disinvestment in research and new technologies, and a thinly stretched global supply chain, Executive Order 13806 set in motion a “whole-of-government effort” to assess risks and propose recommendations “in support of a healthy manufacturing and industrial base.”

General James Mattis and the Department of Defense responded by creating an interagency task force that, for the next year, compiled data and information from defense contractors, academics, engineers, industry experts and company executives. The narrative of the task force’s concluding document — a richly detailed assessment that makes several broad recommendations to the President — is driven by one overriding judgement: The U.S. manufacturing and defense industrial base is plagued by critical weaknesses.