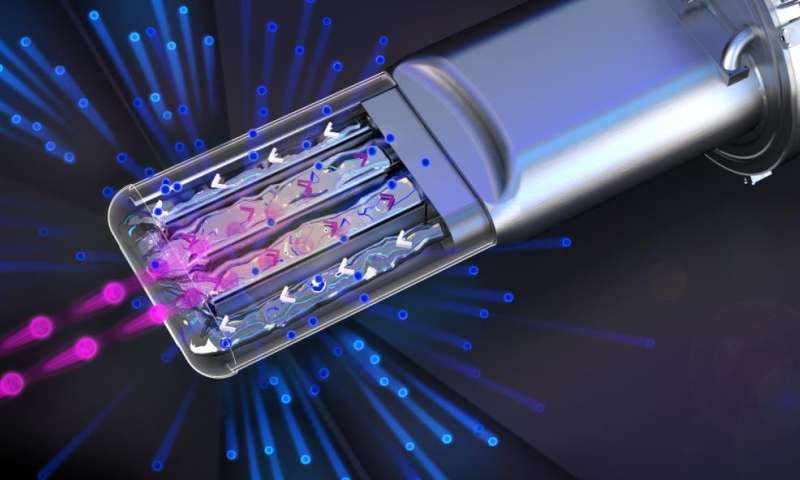 As the proton beam (pink) impinges upon the target and passes into the liquid mercury inside, the mercury absorbs the protons and creates a “spall” of neutrons (blue) that are then sent through moderators and guides to research instruments to study the fundamental properties of materials. Credit: ORNL/Jill Hemman

At the heart of the world’s most powerful pulsed-neutron source is a liquid mercury target.

Since the Spallation Neutron Source (SNS) began operation in 2006, engineers at the US Department of Energy’s (DOE’s) Oak Ridge National Laboratory (ORNL) have continued to develop new approaches to target design, seeking unprecedented levels of power for reliable neutron production. As a result, powerful new techniques are expected to emerge for materials research, leading potentially to improved drug delivery; more efficient batteries; stronger metals for automobiles, bridges, and military armor; and much more.

Neutrons are generated by propelling protons down the facility’s linear accelerator. When the protons collide with the mercury target they create a “spall” of neutrons that are corralled into beam lines linked to surrounding research instruments. More than 1,800 researchers used these neutrons in 2016 to reveal details about the nature and characteristics of materials used in medicine, energy, technology, and industry.

“Before SNS, researchers using neutrons made by accelerators were heavily restricted in the materials they could study because of the large samples necessary for research,” said Alan Tennant, ORNL’s chief scientist for the Neutron Sciences Directorate. “Having a liquid mercury target with a pulsed proton beam provided a much brighter source of neutrons. It vastly improved experimental capabilities and reduced the amount of materials necessary for research, enabling scientists to study a broader class of materials.

“We can now do experiments at SNS in one hour that would have taken researchers a week or longer at older facilitates.”

After 10 years of service to materials scientists around the world, SNS continues to lead the way in understanding how mercury targets perform and is using this understanding to build more reliable, longer lasting targets for increased and consistent neutron production.

SNS targets have up to four layers of steel, with other materials in between such as water, helium gas, or mercury. Circulating the mercury through the target vessel allows it to carry away the heat deposited by the proton beam. When the proton beam hits the target and causes the neutrons to spall, it also creates an intense pressure wave that pounds the target’s entire structure.

The accelerator’s proton beam hits the mercury target with approximately 5 million pulses every day, with up to 23 kilojoules of energy per 700-nanosecond-long pulse.

“The amount of energy produced can be compared to detonating a stick of dynamite in the target every second over months of operation,” said Kevin Jones, director of the Research Accelerator Division.

Such a beating can wear on a target—literally—and SNS researchers are working to better understand what that wear means.

In its decade of operation, SNS has used 16 targets, allowing the SNS team to investigate and overcome many of the enormous challenges associated with the powerful proton beam’s effects.

The first issue is structural fatigue, or stress throughout the target, which arises from the repeated pressure pulses from the proton beam. A compromised weld, for example, could lead to mercury leaks inside the sealed space between the target vessel and the water shroud that helps to protect the mercury.

“To prevent such leaks, we’ve made improvements to the purity of the materials we use for critical parts of the mercury vessel assembly and to the fabrication processes,” said Don Abercrombie, director of the Instrument and Source Division. “Stress and strain diagnostics added in the sealed space for the last four targets have demonstrated that our analytical engineering models do a very good job of predicting the strains observed when the beam strikes the target. These data strongly substantiate our ability to predict target mechanical responses and improve our designs.”

The second issue is cavitation damage erosion: areas of a target’s interior where material is slowly eaten away over time by mercury. This cavitation is caused by prolonged exposure to pressure pulses from the proton beam and is another factor that can lead to mercury leakage.

An effective way of reducing that damage involves the concept of jet flow: a continuous channel of swiftly moving mercury that sweeps across the inside surface of the target vessel where heavy erosion is expected to occur.

“Target 10, operated in 2014, was the first of the jet-flow targets. After target operation, it was confirmed that the jet-flow principle was a success. We found very little damage on the surfaces that the mercury sweeps over,” said Mark Wendel, Source Development and Engineering group leader.

“The targets we’re currently fabricating incorporate the jet-flow feature. So, just as we saw in Target 10, we expect that in these new vessels, cavitation erosion will be significantly limited in the region where the beam strikes the target,” Abercrombie said. “Also, some of the jet-flow targets will incorporate additional material reinforcement in regions that don’t benefit as much from the protective mercury jet flow, which should make them more resistant to erosion.”

Another technique for mitigating stress, strain, and cavitation erosion involves the injection of inert gas bubbles (helium), designed to absorb and lessen the magnitude of the pressure pulses in the mercury that arise from the beam’s impact on the target.

“We performed target experiments at Los Alamos National Laboratory that showed mitigation of both pressure pulse and cavitation damage when helium gas was injected,” Wendel said. “Targets have been retrofitted with low-flow gas bubblers as a first step to implement this technology into the high-powered SNS. Re-engineering the mercury flow and off-gas treatment systems to accommodate the gas injection is challenging, but our team is working hard to be ready for operation in late 2017.”

In addition to improving target reliability, researchers at SNS are studying how to lengthen the life spans of targets that operate at higher powers.

More power means more neutrons, and more neutrons means more science, so one of the primary objectives of SNS is to operate reliably at 1.4 megawatts. Operating SNS consistently at higher power can accelerate experiments, allowing researchers to study more samples under more conditions to expand the threshold of possibilities. They can collect more data in a shorter amount of time to get a better understanding of their subject matter, or they can run more experiments in the same amount of time.

Higher power, however, makes a target’s life span more difficult to predict. To obtain a better understanding of how targets operate at different power levels, SNS engineers decided to test two previous targets—targets 14 and 15—operating the first at 1 megawatt and the second at 1.2 megawatts during normal user operations.

After the targets were taken out of operation, post-irradiation examinations were performed on sections where erosion had occurred, including topographical measurements taken with a laser scanner to precisely reveal the extent of wear.

“This is the first time we’ve been able to do detailed post-irradiation examinations of target surfaces at SNS. It’s a critical and essential step in maximizing the design robustness of our targets, but it’s only one part of what we’re doing,” said Bernie Riemer, the target development team lead in the Instrument Source Design Division. “We’ve made substantial improvements in fabrication processes and oversight and modified design features for fatigue life improvement and flow mitigation of erosion, and we’re pushing hard on deploying gas injection. Our outlook for reliable operation at high power is excellent.”

The SNS team also uses its own beam lines to diagnose targets. Neutron scattering measurements taken at the VULCAN instrument (SNS beam line 7) are enabling target researchers to assess residual stress in and around welds, which may lead to design and process changes for improved weld robustness.

Every facet of the SNS team’s target research is enabling SNS to better plan target operations and the availability of neutrons for its users, with the goal of achieving predictable and reliable operation at 1.4 megawatts by the end of 2018. A target management plan was recently put in place to integrate all the activities related to target improvements to guide neutron production operations through 2018 and beyond.

“We are continuing to advance our knowledge of the targets used here at SNS,” Jones said. “We will always strive to improve them and ensure that our users are provided with ever more reliable research experiences.”