LANL Led by Man of Science at Critical Juncture

LANL Led by Man of Science at Critical Juncture 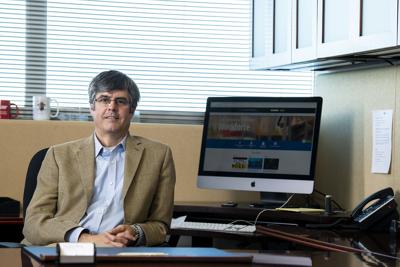 Thom Mason acknowledges many in the area don’t approve of the nuclear weapons program at Los Alamos, let alone plans to ramp up pit production. But he also says it’s important for people to understand that modernizing the nation’s nuclear stockpile does not necessarily mean expanding it. Courtesy photo

Thom Mason knew two things by the time he entered high school. He wanted to be a scientist, and he no longer wanted to play hockey, a sport that’s popular in his native Nova Scotia but also one that can do its share of physical damage. Mason recalled how he lost a tooth and a teammate lost an eye.

Mason instead threw himself into science, which typically has a lower risk of maiming, and his devotion was apparent by the time he hit his midteens: His high school yearbook says he planned to study and apply physics.

“Which is more or less what I wound up doing,” recalled Mason, now the director of Los Alamos National Laboratory. “It never occurred to me to do anything else.”

Mason’s obsession with the field — coupled with what friends say is a disarming ability to win converts on subjects that have little to do with physics’ inner workings — has led him to one of the toughest, most high-profile jobs within the U.S. nuclear weapons complex. About to enter his third year as the lab’s head and president of Triad National Security LLC, Mason and Los Alamos are at a key juncture as the lab gets closer to the controversial production of plutonium pits, the softball-sized cores that trigger nuclear warheads.

Mason, 56, acknowledges many in the area don’t approve of the nuclear weapons program at Los Alamos, let alone plans to produce 30 pits by 2026, with the ability to surge to 80. But he also says it’s important for people to understand that modernizing the nation’s nuclear stockpile does not necessarily mean expanding it.

He said he believes strongly that aging nuclear components, including pits, must be replaced to keep the weapons safe and effective as a deterrent against potential adversaries. Each older warhead is rebuilt, so the overall number doesn’t increase, he said.

“The modernization program is basically taking the weapons systems that form our deterrent … and refreshing them so they can continue to serve as that ultimate guarantor of our security,” Mason said.

Mason’s calm, almost matter-of-fact reasoning, however, doesn’t quell what remains a fierce debate. Some argue the military should use the thousands of leftover pits produced at the now-defunct Rocky Flats site in Colorado during the Cold War. A 2019 report released by the National Science Foundation suggests the pits have a shelf life of roughly 100 years.

But Mason contends that the pits’ properties can change over time, which means a 40-year-old device may not be the same as one that is brand new.

“The current stockpile was deployed in the ’80s, and it’s getting old,” Mason said. “You have some components like the plutonium pits that are radioactive, and that means they generate heat. So stuff wears out.”