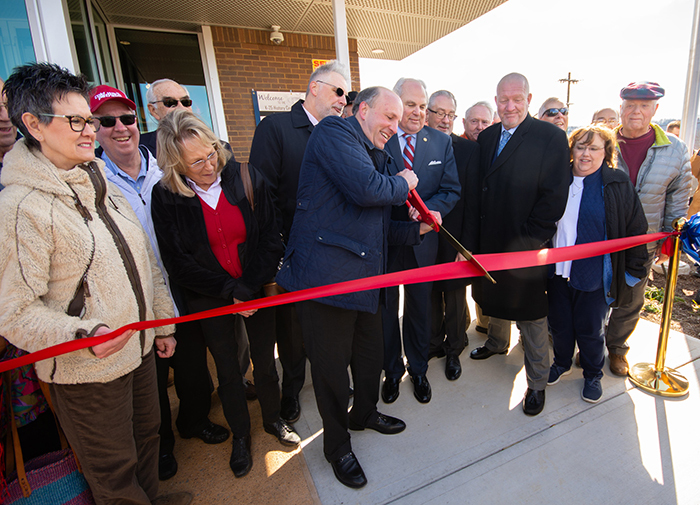 Holding an oversized pair of scissors, DOE Under Secretary for Science Paul Dabbar and Oak Ridge Mayor Warren Gooch cut a ceremonial ribbon to mark the grand opening of the K-25 History Center. They are joined by Oak Ridge EM, labor and contractor officials, and former K-25 Building site workers.

DOE’s Oak Ridge Office of Environmental Management and its contractor UCOR hosted the grand opening for the history center, located next to the original foundation for the K-25 Building. The center was built to honor and preserve the stories of the workers who constructed and operated the K-25 uranium enrichment complex during World War II and the Cold War.

“I applaud the many agencies that helped us bring the K-25 History Center from an idea to an engaging facility that shares the incredible story of a secret city in Tennessee that changed the course of history,” DOE Under Secretary for Science Paul Dabbar said. “DOE is proud to provide the Oak Ridge community a new educational attraction that preserves that story and highlights the men and women who built the world’s largest building in 18 months, and developed first-of-a-kind technology that helped defend and power our nation.”

Due to the K-25 structure’s deteriorated state, EM demolished the enormous facility as part of its efforts to clean and transform the site for reuse. The last shipment of debris from the K-25 demolition project left the site in 2014.

The cleanup program also signed a multi-project agreement to preserve and share the building’s historical significance. The K-25 History Center was a major component of that agreement, and the grand opening marked the fulfillment of a significant commitment to the community. The K-25 footprint is part of the Manhattan Project National Historical Park.

The history center offers visitors 7,500 square feet of exhibits with more than 250 original artifacts on display. Nearly 1,000 oral histories were collected over a 10-year span from former Manhattan Project and Cold War-era workers that museum professionals used to develop the exhibits and interactive galleries.

Originally constructed in 1944, K-25 was the largest structure in the world with a 44-acre footprint. It produced uranium for the world’s first nuclear weapon, and at its peak, the K-25 enrichment complex employed 12,000 workers. Despite its massive size, the complex was kept secret from the public until the end of World War II.

Uranium enrichment operations ceased at K-25 in 1985, and the site was shut down in 1987. EM then began a massive environmental cleanup effort to transform the site into a multi-use private-sector industrial park, known as the East Tennessee Technology Park (ETTP). All remaining demolition projects are scheduled to be completed at ETTP this year.

The K-25 History Center is open to the public seven days a week. Admission is free.