Inside the Global Relay Race to Deliver Moly-99

Inside the Global Relay Race to Deliver Moly-99

The isotope is a cancer-detecting necessity, but it decays within days and isn’t made in North America. A company is rushing to build a plant in Wisconsin to change that. 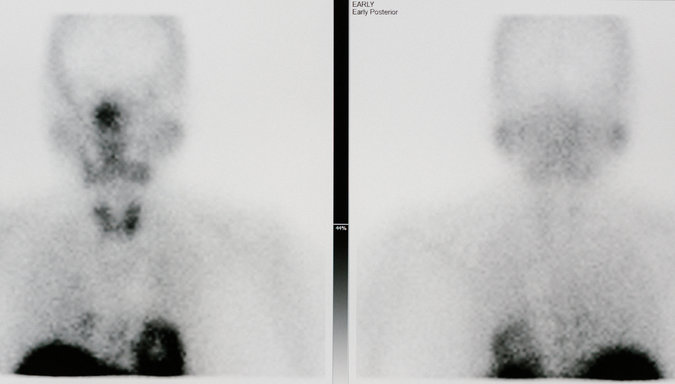 Images of a patient recently injected with a dose of moly-99 at the Stanford University Medical Center. (Credit: Jason Henry for The New York Times)

In a cornfield here, past the shuttered General Motors plant and the Janesville Terrace trailer home park, a facility not seen in the United States in three decades could soon rise: a manufacturing plant that will make a vital radioactive isotope used to detect cancer and other potentially fatal maladies in millions of people every year.

Nuclear medicine imaging, a staple of American health care since the 1970s, runs almost entirely on Molybdenum-99, a radioisotope produced by nuclear fission of enriched uranium that decays so rapidly it becomes worthless within days. But moly-99, as it’s called, is created in just six government-owned nuclear research reactors — none in North America — raising concerns about the reliability of the supply and even prompting federal scientists to warn of the possibility of severe shortages.

Some 50,000 Americans each day depend on a strange and precarious supply chain easily disrupted by a variety of menaces: shipments grounded by fog in Dubai, skittish commercial airline pilots who refuse to carry radioactive material and unplanned nuclear reactor shutdowns, including one in South Africa when a mischievous baboon sneaked into a reactor hall.

Delays that pose an inconvenience for other commercial goods are existential threats in the daily global relay race of medical isotopes that disappear hour by hour. “It’s like running through the desert with an ice cream cone,” said Ira N. Goldman, senior director of global strategic supply at Lantheus Medical Imaging in North Billerica, Mass.

But that race may soon be shortened. Propelled by persistent supply problems and fears that terrorists could seize American uranium en route to foreign facilities, President Barack Obama signed legislation in 2013 prodding American companies into the medical-isotope business.

The $100 million Janesville plant, in the hometown of Representative Paul D. Ryan, the speaker of the House, is the first construction project to pass through the labyrinthine nuclear regulatory approval process since 1985 and is being built by Shine Medical Technologies with $25 million in federal funds.

Greg Piefer, the company’s founder and a nuclear engineer (he drives a Tesla with the license plate “NEUTRON”) has big plans for the cornfield: a plant that could manufacture up to 50,000 doses of imaging agent a week. “Ryan called me out of the blue and he said, ‘We really want you here,’” Mr. Piefer said.