How A Nuclear Waste Site 2,800 Miles Away Became A Hawaii Priority

How A Nuclear Waste Site 2,800 Miles Away Became A Hawaii Priority 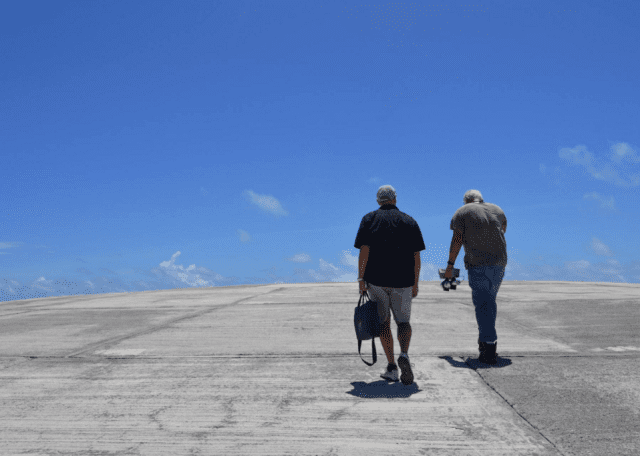 U.S. Department of Energy officials visited Runit Dome in 2015. The DOE continues to monitor the dome and says cracks on the surface, which it describes as superficial, will be addressed. Credit: Tamara Greenstone Alefaio

A concrete dome built decades ago by the U.S. government on a Marshall Islands atoll 2,800 miles from Hawaii has the state’s federal lawmakers worried.

The Runit Dome is a relic of America’s atomic past. It’s home to 3 million cubic feet of radioactive waste that was buried there as part of the government’s effort to clean up the mess left from dozens of nuclear tests in the 1940s and ’50s that decimated the atoll.

A warming climate and rising sea levels now threaten the integrity of the saucer-shaped structure, which, if it fails, could spill its radioactive contents into the Pacific, a scenario that would threaten both people and the surrounding environment.

Members of Hawaii’s federal delegation, led by U.S. Rep. Tulsi Gabbard, recently secured a provision in the bipartisan National Defense Authorization Act to study what it would take to repair the dome.

It was among the top priorities for Hawaii, at least in the House. Hawaii Congressman Ed Case, who is a founder of the Pacific Islands Caucus, said the Runit Dome is of critical importance, not only for the islands but the U.S. as a whole.

“This is a concern on a number of levels,” Case said. “The basic one being: Is the Runit Dome capable, especially in a time of rising sea levels, of containing the very deadly radioactive waste that we deposited into that dome? The short answer is we’re not sure.”

Columbia University researchers published a study in July that found that the amount of radiation on Enewetak atoll, where the dome is located, and other parts of the Marshall Islands rival what’s been detected around Chernobyl and Fukushima, two locations synonymous with nuclear catastrophe.

The NDAA provision calls on the Secretary of Energy to submit a report to Congress within 180 days that includes a detailed plan to repair the Runit Dome and ensure that it “does not have any harmful effects to the local population, environment, or wildlife.”

The report should include an assessment of the current structure, cost analysis for the repair and a summary of discussions between the U.S. government and Marshall Islands regarding the dome.

In addition, the report will analyze how rising sea levels will affect the ability of the dome to contain the radioactive contents.