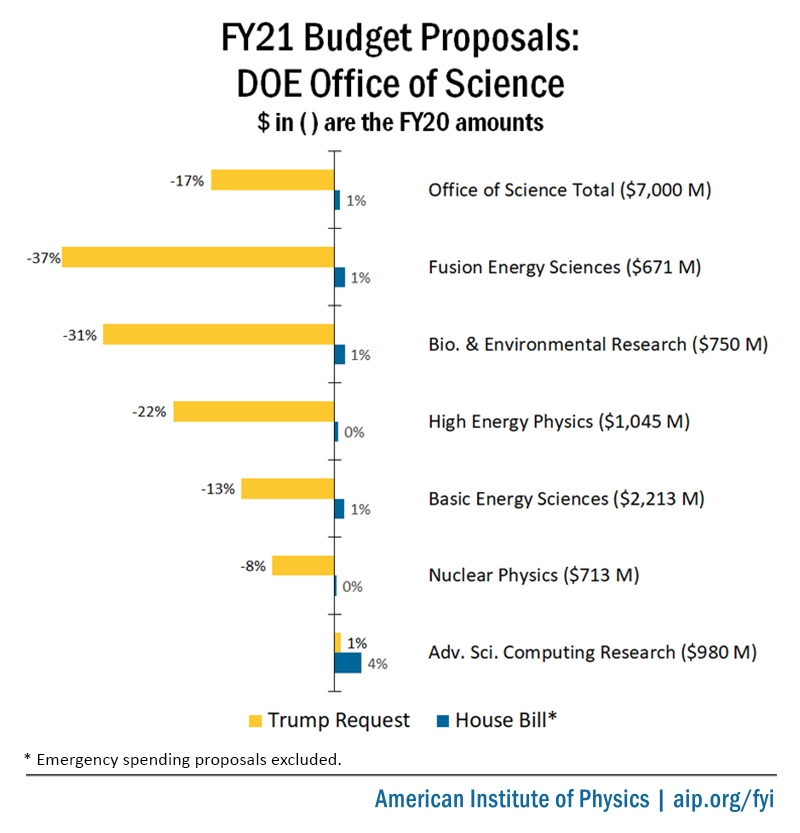 As Congress negotiates appropriations for fiscal year 2021, the House has proposed a marginal increase in the budget for the Department of Energy Office of Science while the Senate has not made any counterpart proposal public. House Democrats have also put forward an expansive package of “emergency” economic stimulus spending.

With fiscal year 2021 now underway, the Department of Energy Office of Science will operate with stopgap funding until after lawmakers finish negotiating spending legislation for the year. This summer, the House passed a bill that would provide mostly level funding for the office and its main component programs. The most notable proposed change is a 4% increase for the Advanced Scientific Computing Research program.

Unusually, counterpart proposals have not been released by the Senate. However, the chamber’s lead appropriator for DOE, Sen. Lamar Alexander (R-TN), did say in early spring that he objected to the Trump administration’s proposed cuts and would continue pressing for a major expansion in the department’s budget. Adding to budgetary uncertainty is the prospect the office could receive one-time pandemic-response funding, either through ordinary appropriations or special relief legislation.

Congress already provided $100 million to the office in March to support pandemic-related research. House Democrats have also included $6.25 billion in advance funding for 67 projects as part of a set of “emergency” economic stimulus measures they appended to the House’s DOE spending bill over Republican objections. Some of these projects are also experiencing pandemic-related cost increases. Further complicating matters, the House’s non-emergency proposals for some projects involve unexpected cuts, suggesting the Democrats may have shifted funding intended for them into the emergency package.