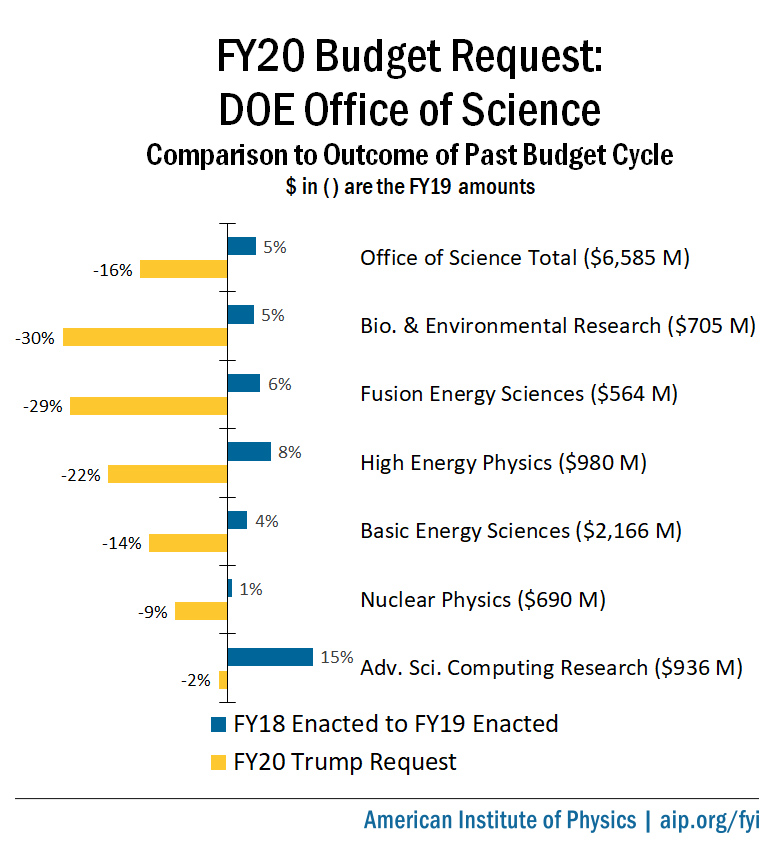 he president’s fiscal year 2020 budget request calls for a $1 billion, 16 percent cut to the Department of Energy Office of Science, which would erase much of the budget increase Congress has provided it over the last two budget cycles. Beneath its toplines, the request also proposes small amounts to begin planning on a variety of new experiments and facilities.

Funding for the Department of Energy Office of Science would drop by $1 billion, or 16 percent, to $5.55 billion under President Trump’s budget request for fiscal year 2020. The cut would be distributed unevenly among the office’s main programs, with Biological and Environmental Research (BER) seeing the steepest drop, as in previous requests. Cuts to other programs would roll back most of the increases Congress has provided over the past two years. Only Advanced Scientific Computing Research (ASCR) would be shielded, with its budget remaining near its current, historically high level.

Congress has rejected similar Office of Science cuts that the Trump administration has proposed in its previous requests. At a hearing last week, Sen. Lamar Alexander (R-TN), who chairs the Senate appropriations subcommittee responsible for DOE’s budget, highlighted the record funding Congress has instead provided the office and also noted his own new proposal to double federal funding for energy research. Whether or not that proposal moves forward, the budget the office ultimately receives will emerge from extensive negotiations across both chambers over the scale of total federal spending and a host of other issues.

Beneath its proposed toplines, the president’s request also makes a variety of project-level proposals that Congress may also address. These include commitments to continue work on major user facility upgrades, albeit at a slower pace than at present, and to establish at least one research center in quantum information science. The request also proposes token funding to begin work on a number of new projects, which Congress could decide to pursue more rapidly.

For a summary of the request and details regarding previous appropriations cycles, see FYI’s Federal Science Budget Tracker.