President Trump’s fiscal year 2020 budget request for the Department of Energy includes a $2 billion cut to the Office of Energy Efficiency and Renewable Energy and smaller but still sizeable cuts to nuclear and fossil energy R&D programs. The request proposes increases for electric grid resilience programs that would support new R&D efforts. 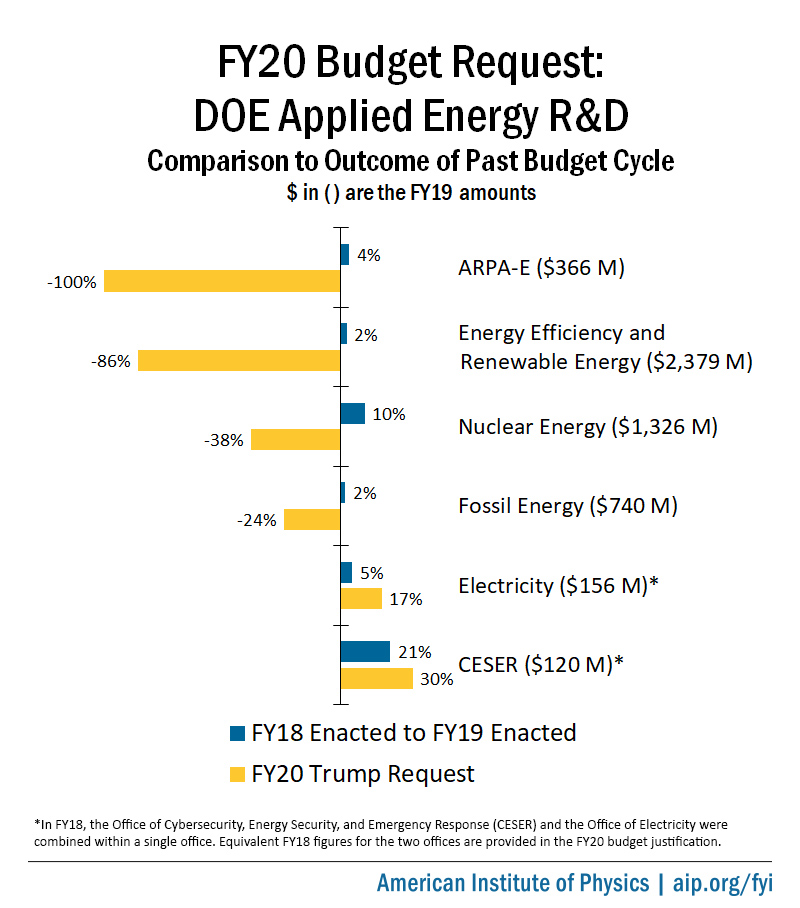 In its budget request for fiscal year 2020, the Trump administration has once again proposed deep cuts for the Department of Energy’s applied R&D programs. For the third time, it is seeking to defund the Advanced Research Projects Agency–Energy and to slash the Office of Energy Efficiency and Renewable Energy (EERE) budget to a small fraction of its current size. Nuclear and fossil energy R&D programs would also see large cuts. However, the administration is requesting increases for programs focused on the security and reliability of the nation’s electric grid.

Detailed figures can be found in FYI’s Federal Science Budget Tracker. Budget justifications for all DOE offices are posted here.

Over the last two years, Congress has rejected the administration’s proposed cuts to DOE’s applied energy programs, and has instead provided substantial funding increases. It appears unlikely to change course this year.

Rep. Marcy Kaptur (D-OH), who chairs the House appropriations subcommittee responsible for DOE’s budget, told Energy Secretary Rick Perry at a hearing on March 26 that the administration’s latest request “hits a new low.” At another hearing on April 3, the subcommittee’s ranking member, Rep. Mike Simpson (R-ID), said he is unconcerned about the administration’s proposals, arguing the White House is obliged to propose budgets in line with the spending caps currently in place for next year. He went on,

To tell you the truth, I’ve often wondered why a president does a budget, because I don’t really look at the numbers. … For the last couple years they’ve cut down EERE in their budget proposal. Guess what? That doesn’t happen. We put money back into it and fill those accounts back up as Congress sees fit.

In the Senate, there is talk of significantly increasing energy R&D spending. Kaptur’s counterpart there, Sen. Lamar Alexander (R-TN), is currently advocating a “Manhattan Project for Clean Energy” that would double spending on energy R&D. At a hearing on April 11, Energy and Natural Resources Committee Chair Lisa Murkowski (R-AK) said she is “all in” on Alexander’s proposal. As a detailed plan has not yet emerged, it remains unclear how any additional funding would be distributed among the applied R&D programs, ARPA–E, and the DOE Office of Science..