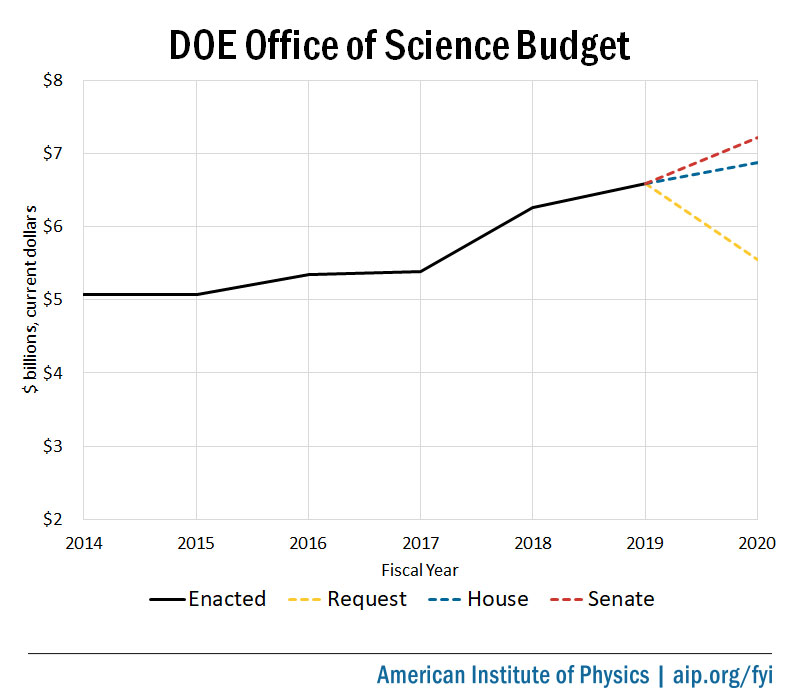 The House and Senate have both proposed spending increases for the Department of Energy’s Office of Science. New and ongoing facilities and equipment projects are set to receive the budgets they need to progress apace, while emerging priorities such as quantum information science and high-performance computing are in line for funding boosts.

The Senate Appropriations Committee unanimously approved a fiscal year 2020 spending bill on Sept. 12 that would significantly increase funding for R&D programs across the Department of Energy. The budget for the DOE Office of Science would rise 10% to $7.22 billion under the proposal. That boost exceeds the 4% increase proposed by the House earlier this year and is disproportionately large compared to the 4% increase to the statutory cap on nondefense spending that Congress approved in July.

Spending on the Office of Science has risen steadily over the last several years, punctuated by a 16% increase in fiscal year 2018. The Senate’s proposed increase is not quite so large, but Sen. Lamar Alexander (R-TN), who chairs the chamber’s appropriations subcommittee for DOE, has recently said he would like energy R&D spending to double over five years. Whether he can persuade Congress to carry out that vision remains to be seen. For fiscal year 2020, the question is how much influence the Senate’s DOE proposal will have as negotiations over programs all across the government continue.

However those negotiations unfold, it is likely the Office of Science will see another budget increase. The House and Senate reports on their respective spending bills detail their program-level priorities for additional funding. Their proposed budget allocations across DOE’s six science program offices are summarized in the chart below. Proposals for facilities and other budget lines are collected in the FYI Federal Science Budget Tracker. 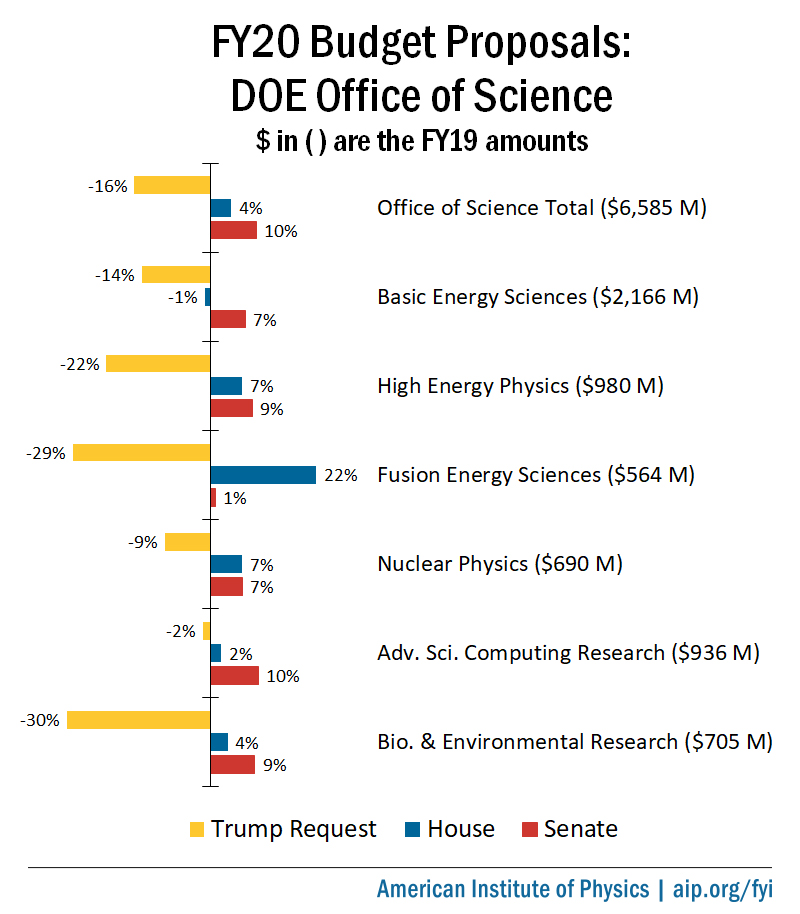 The Office of Science is currently ramping up efforts in five areas identified as priorities by the Trump administration: quantum information science, artificial intelligence, exascale computing, microelectronics, and biosecurity.

Quantum information science. This year, DOE planned to spend about $120 million on QIS and sought $169 million in its fiscal year 2020 budget request for activities across all six science program offices. The Senate is proposing $195 million, with $75 million directed toward establishing “up to five” QIS research centers. Called for in the National Quantum Initiative Act, the centers are each to be funded at up to $25 million annually. The House has not proposed specific amounts for QIS, but makes clear it supports DOE’s work in the area.

Artificial intelligence. The Senate proposes to meet the administration’s request for $71 million in funding for AI across five program offices. As with QIS, the House expresses support for work in the area without specifying a budget amount.

Other priorities. The administration requested $500 million for the Office of Science portion of DOE’s Exascale Computing Initiative, $25 million for microelectronics R&D, and $20 million for biosecurity. Neither the House nor the Senate specify office-wide funding amounts for these areas, which leaves DOE some leeway in allocating funding for them.

Congressional priorities. The Senate specifies $20 million within the Basic Energy Sciences program for research related to the capture of carbon dioxide directly from the atmosphere. The effort is to be part of a coordinated program with DOE’s renewable and fossil energy offices.

“Collaborative research efforts between the department and the National Institutes of Health are developing breakthroughs in health research, including drug discovery, brain research, diagnostic technologies, imaging, and other biomedical research areas. The department is encouraged to expand its relationships with NIH in order to work together more strategically to leverage the department’s research capabilities, including instrumentation, materials, modeling and simulation, and data science.”

The report directs DOE to submit a plan responding to a 2016 Secretary of Energy Advisory Board task force report on biomedical sciences.