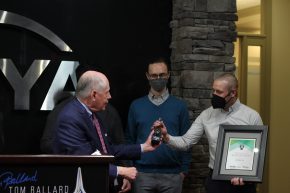 Dan Close, right, receives the first “Tom Ballard Innovation Award.” Tom Ballard, who the award is named for, presented Close with the award on March 12.

490 BioTech, a company focused on changing the way pharmaceutical drug testing is done, was named the first winner of the “Tom Ballard Innovation Award” during an awards event Friday morning at PYA headquarters.

490 BioTech has developed bioluminescent technologies that enable new drugs to move more quickly through the pharmaceutical testing process. As first-prize winner, it receives a combination of $50,000 in capital and in-kind services from PYA.

Founded in 2011, 490 BioTech has developed patented technology at the University of Tennessee that allows cells to produce a continuous light signal with no external help, adjusting intensity to reflect real-time changes in cellular health. 490 BioTech markets this to pharmaceutical and contract research fields as a way to reduce drug development costs, while simultaneously providing information on safety and effectiveness. The company recently won the 2020 Judges’ Choice award during Innov865 Week “Startup Day,” and has received more than $2 million in Small Business Innovation Research funding and other grants.

Eonix works in battery efficiency and is working to develop a non-flammable electrolyte that is more stable and holds more power than the ones found in current batteries.

Ascend Manufacturing works in 3D printing technology and has developed a printing machine that makes products stronger, cheaper, and faster than the competition.

If you missed the presentation for the ‘Tom Ballard Innovation Award’ Friday morning, you can still view the livestream video here, or look at additional photos from today’s event below.