The final appropriations agreement for fiscal year 2017 provides a 0.8 percent increase for the Department of Energy Office of Science. Five of the office’s six research programs are set to receive funding increases, while Fusion Energy Sciences will receive a 13 percent cut as further U.S. contributions to the ITER fusion facility are withheld.

The House passed final appropriations legislation for fiscal year 2017 that will increase the budget authority of the Department of Energy Office of Science by 0.8 percent over last year’s levels, as well as fund the other federal science agencies, through the end of the fiscal year. The bill, which is expected to become law by the end of the week, is the product of over two years of budget formulation, consideration, and bipartisan negotiations between the White House, House, and Senate.

The Energy-Water section of the explanatory statement accompanying the legislation also provides policy direction and spending levels for specific programs and projects at the Office of Science and the rest of DOE. The bill incorporates direction from last year’s House and Senate appropriations committee reports as well.

Congress is providing for the following changes in funding at the Office of Science in fiscal year 2017: 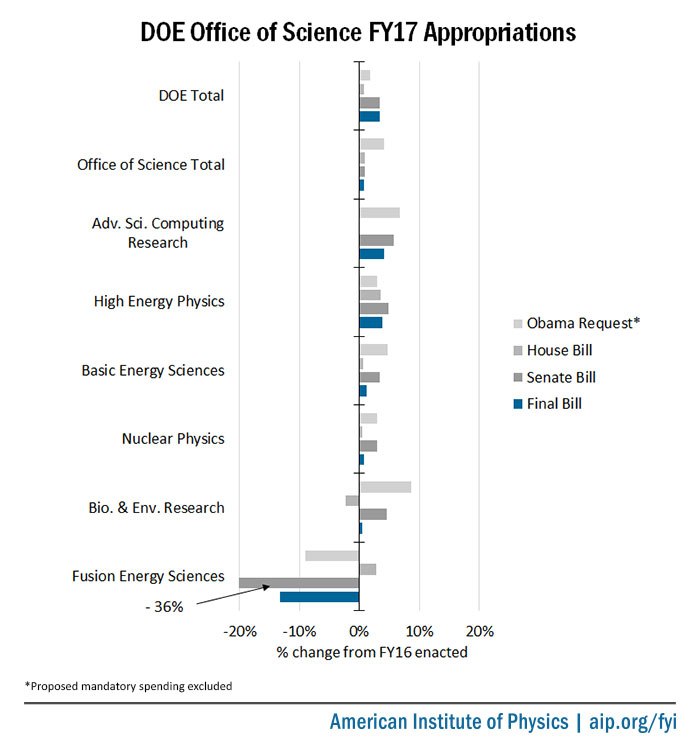 In its fiscal year 2017 budget submission, the Obama administration requested a 4.1 percent increase (excluding an additional mandatory spending proposal) for the Office of Science, but Congress opted for a more modest 0.8 percent uptick. Of the office’s six major research programs, five will receive funding increases ranging from 0.5 to 4.2 percent, while the Fusion Energy Sciences program will experience a 13.2 percent cut.

Within Fusion Energy Sciences, the cut falls on the International Thermonuclear Experimental Reactor (ITER) project, which is being slashed to $50 million, or $65 million below the fiscal year 2016 level. As DOE has already allocated $50 million in support of ITER this fiscal year, the bill effectively halts further funding for the project. However, the bill does specify that DOE may submit a budget reprogramming request to congressional appropriators in order to spend up to an additional $50 million on ITER in fiscal year 2017.

Details on proposed and final funding levels for the six research programs are included in the following table:

All figures are in millions of nominal U.S. dollars and are rounded to the nearest million. The percentages are calculated based on the unrounded figures.

Further budget information, including detailed breakdowns of funding levels for specific facilities and projects within the Office of Science, is available in the Federal Science Budget Tracker on FYI’s website. Below are selected highlights from the bill and its accompanying reports.