Failures of Congress Keep Nuclear Waste Scattered Across the US

Failures of Congress Keep Nuclear Waste Scattered Across the US 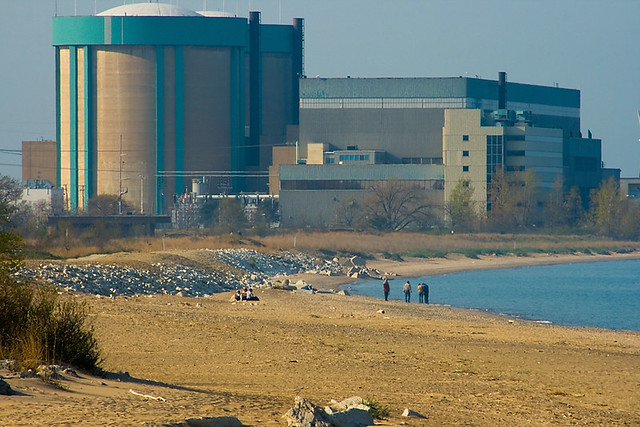 In Zion, Illinois, 257 acres of prime lakefront property about 40 miles northwest of Chicago should be at the center of a redevelopment plan to revive a struggling community caught in the aftermath of a closed nuclear plant, says its mayor, Al Hill.

But after decades of federal inaction on a comprehensive strategy to move the nation’s high-level radioactive waste from some 121 sites across the country, Zion and its local officials are coming to the same stark realization as many other communities with shuttered or aging plants: The federal government’s foot-dragging on nuclear waste policy may seem as long as the radioactive materials’ 10,000-year half-life.

Some 64 so-called dry cask storage units containing 2.2 million pounds of deadly spent nuclear fuel rods are stored on the site of what was the Zion Nuclear Power Station, the remnants from generating nuclear power since 1974. And they’ve left Zion in a kind of purgatory, unable to move on from its nuclear past even as it must shoulder the public safety and health risks from the inability of Congress and multiple administrations to decide how to dispose of the radioactive waste.

“When businesses are considering locating in Zion or making real estate investments, the nuclear waste presents a negative perception of our community,” Hill said. “Plans call for the development of the lakefront, and we are unable to attract investments to that, to what should be the most valuable waterfront land along Lake Michigan.”

Aside from disposing of the spent fuel, the plant’s shutdown, or decommissioning, has gone well. The process is running nearly a decade ahead of the original timeline and below budget.

The plant was shut down in 1998 after an operating error caused a breakdown in equipment deemed to be too costly to warrant fixing, according to its owner, Exelon Corp. of Chicago. It chose instead to close the reactor and ready it for a tear-down that it estimated would take 30 years to complete.

Recognition of the growing legacy of nuclear waste is hitting members of Congress — especially those from states and districts where it awaits a federal disposal plan.

Six plants around the country have been shuttered since 2013, with eight more planned over the next decade, according to Beyond Nuclear, an anti-nuclear environmental group. A growing coalition of lawmakers is trying to advance some strategy, be it financial compensation or actually moving the nuclear waste.

“Zion is the poster child for what some of these communities can look forward to,” said Illinois Democratic Rep. Brad Schneider. “Here we are 20 years later, spent fuel is still on the shore, 100 yards from Lake Michigan and still having an economic impact on the community, and there’s no end in sight.”

Flanked by Hill and Democratic Sen. Tammy Duckworth in the shadows of the storage canisters holding Zion’s waste, Schneider introduced legislation a year ago that would provide grants and tax credits to compensate communities for the negative economic effects of storing nuclear waste.

The bill is unlikely to become law this Congress, but one of its provisions — directing the Energy Department with other agencies to study the public and private financial resources available to communities storing nuclear waste on-site during decommissioning — made it into the Energy-Water title of the $147.5 billion fiscal 2019 spending package passed last month.

However, the same spending bill continued a nearly decade-long impasse over a failure to appropriate funds for the Department of Energy’s nuclear waste management responsibilities. That means the federal government is unlikely to make any progress on the problem in the coming year, despite the increased congressional interest in the issue as more plants enter into the decommissioning phase.

The inaction comes with a consequence.

More than 80,000 metric tons of high-level nuclear waste are stored at nuclear reactor sites in more than 35 states. The longer the waste sits, the more the government will be forced to compensate nuclear power producers for its inaction.

Estimates place the government’s liability from nuclear waste at $34 billion and growing, a number that doesn’t include the effects on the communities unable to reuse the land.

That liability stems from the Nuclear Waste Policy Act of 1982, which said the federal government would take responsibility for disposing of the waste in a nuclear repository. A 1987 update to that law dedicated the controversial Yucca Mountain site in Nevada as the location for that facility, despite protests from state and local officials in Nevada.

Following $15 billion in federal investment into research and development activities for Yucca Mountain, critics led by former Senate Democratic Leader Harry Reid of Nevada helped to shutter the site in 2010 after the Obama administration deemed it “unworkable,” in part due to the local opposition.

In its place, the Energy Department looked to advance a so-called consolidated, interim storage approach that would move the waste from nuclear plant sites to a centralized temporary facility in a more remote location.

Private companies in West Texas and Southeast New Mexico have emerged as potential storage locations, but a lack of congressional authorization has prevented DOE from contracting with them to take some of the waste.

Congress has remained deadlocked on how to move forward on nuclear waste over much of the last decade, but a consensus seems to have emerged in the House, led in part by a coalition of lawmakers facing the reality of reactor sites in their districts becoming de facto storage sites.

“The more sites shut down, the more folks on both sides of the political aisle say … we ought to move the used fuel,” said Rod McCullum, a senior director of used fuel and decommissioning policy with the Nuclear Energy Institute.

“The silver lining of decommissioning is that it’s putting more people in the camp for being advocates for removing the used fuel from the site,” McCullum said.

In May, the House overwhelming passed legislation, 340-72, to address the impasse by jump-starting the Yucca Mountain license application pending before the Nuclear Regulatory Commission. That bill would also offer host states financial and infrastructure incentives to attract more local support, including for communities willing to host interim storage facilities.

The bipartisan consensus of that legislation emerged in the House Energy and Commerce Committee when co-sponsors John Shimkus, an Illinois Republican, and Doris Matsui, a California Democrat, attached language that would let DOE move forward on an interim storage site, with an emphasis of moving waste from already decommissioned nuclear plants as the first priority for the temporary facility.

That type of compromise means the legislation will have staying power, even if the House should flip to Democratic control, say the bill’s backers.

The bill is unlikely to move in the Senate, as Nevada Sens. Dean Heller, a Republican, and Catherine Cortez Masto, a Democrat, have the ability to block consideration of the bill over their opposition to the Yucca Mountain site. They have the backing of Senate leadership as the two parties look to control a swing state.

But pressure is only going to grow as more lawmakers realize the longevity of the waste.

“So you lose the plant, you lose all those jobs, and then you clean the site, and some of these are on pretty good locations — Lake Michigan, Chesapeake Bay, San Onofre. There’s an opportunity lost because you can’t develop it,” Shimkus said. “Some of these communities get the double whammy. They lost the generating facility, they lost the jobs, they lost the tax base — and they can’t redevelop it.”

For Zion, that means a lakefront devoid of luxury condos or other development to boost property tax revenues, businesses employing town residents or lake-related recreation opportunities to drive tourism.

“That was not part of the deal,” Hill said. “I speak for all the citizens of Zion when I say we do not want to be a storage facility for radioactive waste.”